The next diet fad: Imagine yourself pigging out 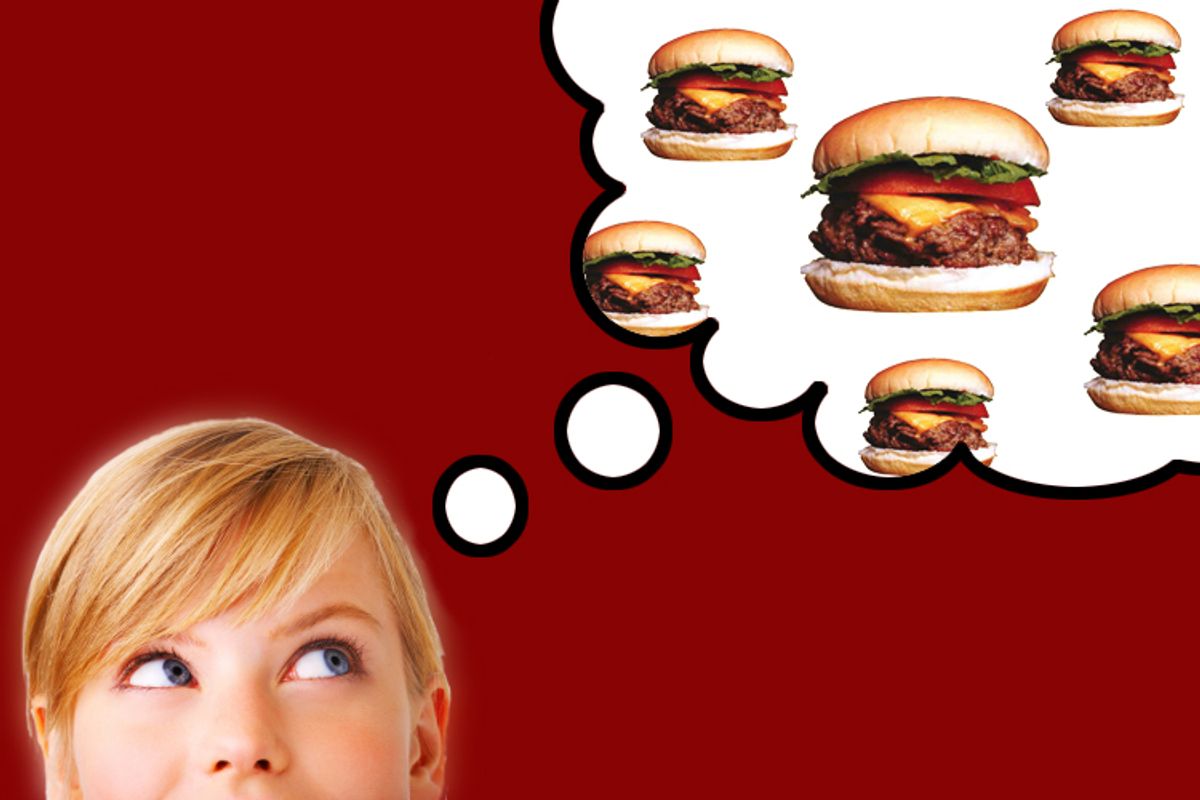 Psychologists at Carnegie Mellon, led by the excellently named Carey Morewedge, just published a study in Science demonstrating the Mother of All Ironies: that if you imagine yourself eating something, you can actually curb your appetite for it. Coining it the "Imagine Diet," New York Times science writer John Tierney has come across what could be his brilliant exit strategy from the paper: Publish a book of pictures of fried chicken and chocolate cake with some meditative instructions, and boom! Set sailing on his new yacht.

First, he'll have to get over the resistance to this counter-intuitive notion and the anger of the six or seven still-employed magazine food editors in America. I mean, isn't the whole point of food porn to make you drool in your lap and want to tear into a pot pie? Yes, Tierney explains, but there's a difference between the psychological phenomena of "sensitization," which is when picturing that hot, steamy pot pie makes you want it, and "habituation," which is when you get over that desire, satisfying it. What Carey Morewedge (I find it impossible to not say his full name) found was that people can bypass their desire and trigger habituation to food. But to do so, you can't just imagine having it in front of you; that leads to sensitization. You have to really, concertedly imagine yourself in the process of eating it. A bunch of it.

In his experiments, subjects were shown photos of 30 M&M's, one at a time, for three seconds each. Others were shown photos of 30 cubes of Kraft cheddar, one at a time, for five seconds. Afterward, the M&Mers still liked M&Ms, but ate fewer than they would normally. The cheesers still like cheese, but also ate relatively less. (Though maybe Carey Morewedge was stacking the decks. He couldn't find a more appealing cheese than Kraft cheddar?)

Cheese choice aside, the psychologists concluded that the phenomenon was, in fact, habituation. The pictures didn't actually turn people off of those foods, they just didn't feel like eating much of them; their desire had been tempered. And, notably, the subjects didn't feel "full," nor were they less likely to pig out on foods they hadn't been staring at, further suggesting that the phenomenon was related specifically to the stimulation of the particular food the subjects were picturing themselves eating.

Knowing that, Tierney suggests a way for us to bypass unhealthful foods:

For instance, if you had a bag of carrots and a bag of potato chips in your home, you might try mentally consuming the chips so that you'd be more inclined to reach for a real carrot. And then, assuming that worked, perhaps you could try habituating to other vices ... If you imagined watching "Jersey Shore," could you avoid the real show?

Reading that, though, I came to my first objection, and it's not in defending my hair-gelled home state. Everyone knows chips are irresistible, and everyone knows that they're extra-super irresistible when you don't really realize you're eating them. That is, when the Doritos are a backdrop to watching the Chargers demolish the Chiefs on Sunday afternoon, and you suddenly realize that you've just eaten the entire bag. Food psychologist Brian Wansink argues that most of our overeating results not from hunger or even deliciousness, but simply because we tend to eat mindlessly -- our mouths just keep going until the bag or plate is empty, as he famously demonstrated with a secretly self-refilling bowl of soup.

So if you are mindful enough to sit there and concentrate on eating chips ... one ... by ... one, you could probably skip the self-fake-out psychological somersaults and just monkishly eat exactly five Doritos and no more. And, you know, actually experience the pleasure of those chips.

And that thought led me to realize what made me kind of uncomfortable about this whole business in the first place. There's a lot to be said for the pleasures of the imagination; the brain is wider than the sky. But the central notion here is to imagine the stimulation of eating something you crave and thus, essentially, becoming bored with it before you take an actual bite. If it can be codified into an effective technique, more power to the people who use it well. But I can't get past the idea that what you're actually doing is curbing your desire without any of the pleasure of satisfaction.

Despite the fact that my doctor actually called me the other day to say that my cholesterol made him sad, I detest our culture of dieting. For every grapefruit miracle in the world there are 50 million stressed-out, disappointed yo-yo dieters, and I can't help thinking that's because our fundamental diet framework is about denying ourselves, trying to live virtuously without pleasure. What if we turned it around and decided to really indulge in our pleasure? To not gorge ourselves whenever we want something, but to eat smartly, in physical moderation, but to also really give our brains over to the senses and the experience of eating? You wouldn't need a ton of food if you chewed slowly, considering and truly savoring each bite. You might even find yourself habituating ... the real way.