Accused of being a rape apologist, MSNBC's big dog storms off the microblogging service in a huff 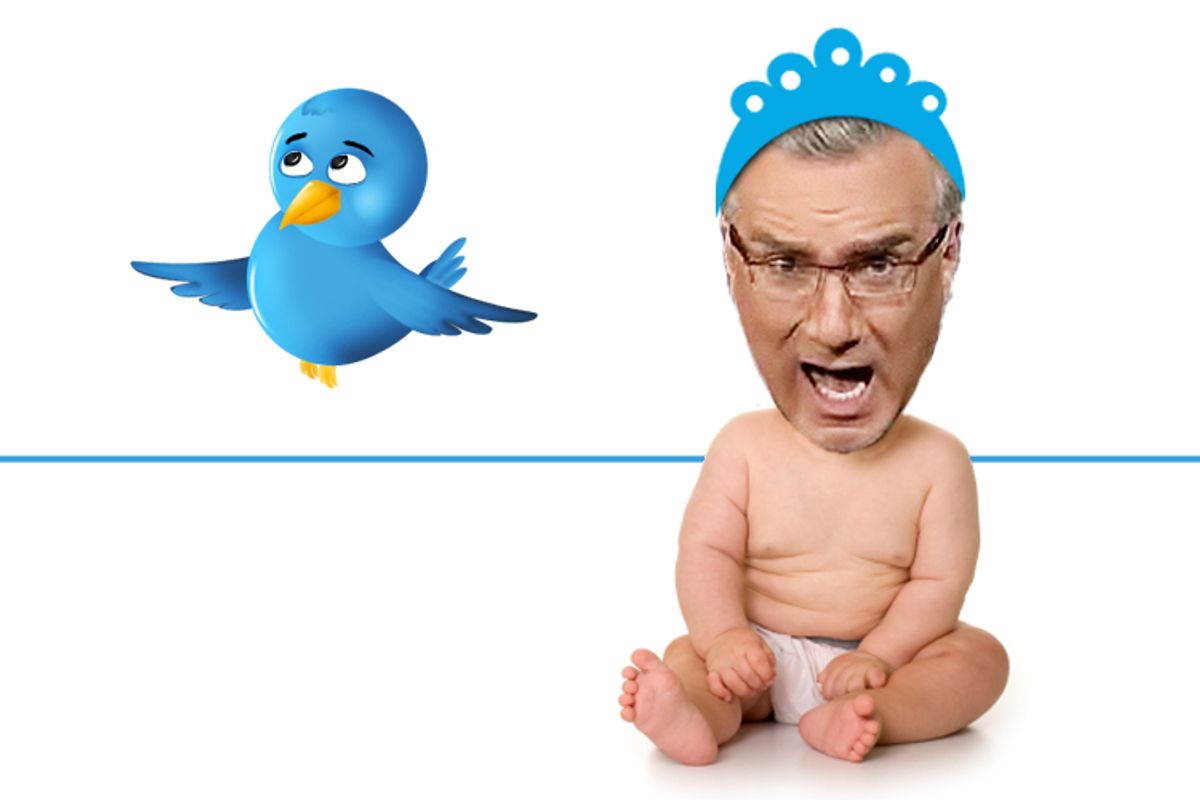 Oh no, Keith Olbermann has quit Twitter. Or "suspended his account," or something. He quit the Internet in a huff, which is never a good idea, especially when you're a prominent public figure, like Mr. Olbermann, who has a TV show. It's just not a good look! You come off as, you know, thin-skinned. Incapable of taking criticism. What was the "frenzy" about, exactly? Well, the term "rape apologist" was thrown about. First, there was this segment, from "Countdown," in which Michael Moore explained why he posted bail for WikiLeaks founder and accused rapist Julian Assange:

Moore called Assange's arrest "hooey" and claimed that Assange was arrested solely because a condom broke during sex. Sigh.

Moore has not yet responded. Olbermann, though, most certainly did respond, and it did not reflect well on him, at all.

He bickered with Mediaite's Tommy Christopher, continued to demonstrate that he didn't know what Assange was accused of, and though he did finally apologize, it wasn't the sort of apology that involved an admission of wrongdoing. (And Olbermann did say some complete nonsense, like this, that he ought to think about "retracting.")

The horribleness of this entire public conversation is nicely described here by Jezebel's Anna North.

To be fair, poor reporting led quite a lot of people to believe that Assange had been charged with some silly-sounding crime called "sex by surprise" -- that's where the whole "he's under arrest because a condom broke!" nonsense came from -- when in fact he is accused of, in Whoopi Goldberg's regrettable formulation, "rape-rape." (But to be fairer, the whole "the condom broke" thing means consent was withdrawn, which means that, yes, that's rape.)

So, for the record, here is what Julian Assange is accused of, as per the Guardian, a newspaper that both Keith Olbermann and Michael Moore are most likely familiar with:

Gemma Lindfield, representing the Swedish authorities, told the court he was wanted in connection with four allegations.

The first complainant, a Miss A, said she was the victim of "unlawful coercion" on the night of 14 August in Stockholm. The court heard Assange was alleged to have "forcefully" held her arms and used his bodyweight to hold her down. The second charge alleged he "sexually molested" her by having sex without using a condom, when it was her "express wish" that one should be used.

A fourth charge, relating to a Miss W, alleged that on 17 August, he "improperly exploited" the fact she was asleep to have sex with her without a condom.

Obviously Assange should be presumed innocent until proven guilty in a court of law, and it's also fair to say that Interpol never would've pursued this if it weren't for the fact that governments are cranky about WikiLeaks, and it's even fair to help him pay his bail, because everyone has the right to have someone pay their bail -- but his alleged victims should definitely not be presumed to be CIA spies or unreliable crazy feminazis, and no one with an interest in the story can credibly claim to be confused by the "strange" accusations against him. Not anymore. Assange was arrested on an extradition warrant connected to charges of committing rape.

Olbermann's been accused -- on grounds both specious and not -- of misogyny before. He's made awful comments about women, but he also has mentored and championed fine female journalists. People are complicated! They contain multitudes. Olbermann himself seems to understand this: "I would suggest that the likelihood Assange is an asshole is about 157%," he wrote, long after that sort of comment would've been helpful.

But instead of conflating people with legitimate criticisms of his statements/non-statements with people yelling at him for things he didn't actually say or do (it's Twitter, Keith, you can just ignore those people), and then dramatically suspending his Twitter account in a huff because of the "frenzy," Olbermann should probably just admit that he said some stupid stuff and apologize for real.

This story has been corrected since publication to reflect that Assange has not been charged with a crime.