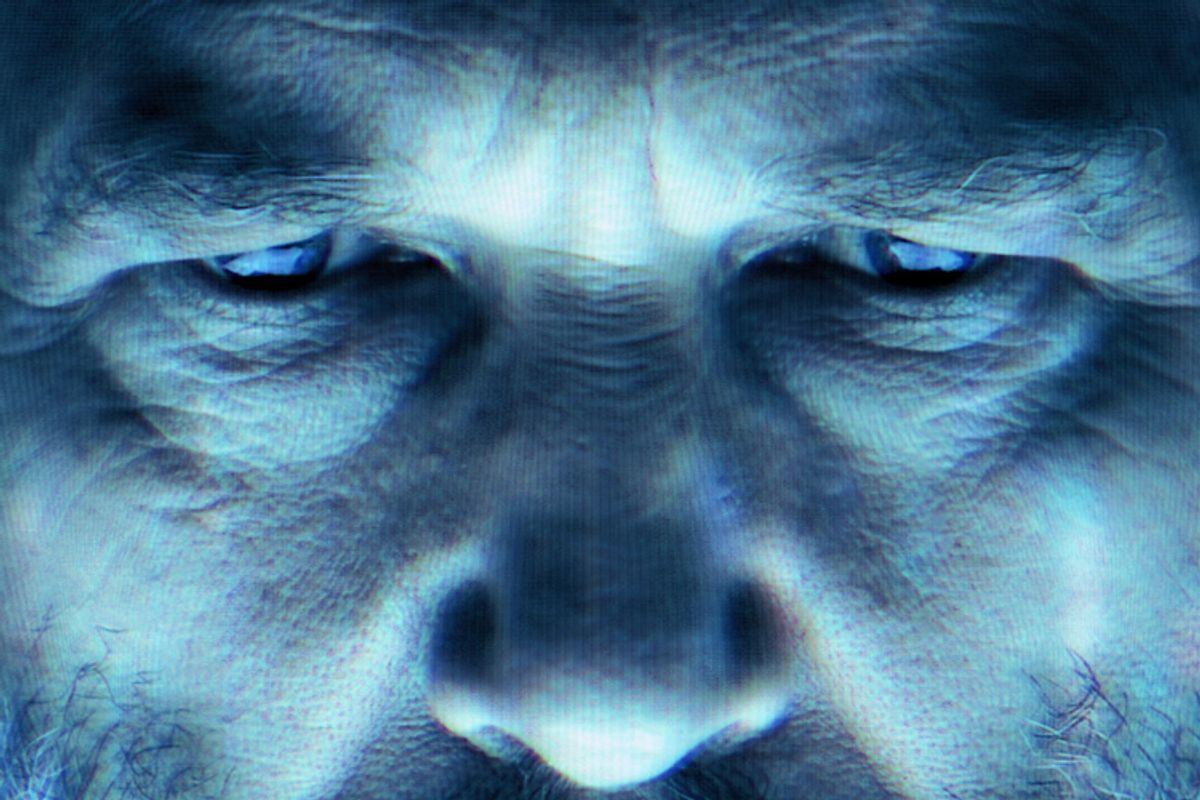 If you kind of, sort of liked the "Matrix" franchise but found it too fast-paced, too dense with plot and way too short on neon-lit motorbike races and homoerotic Ultimate Frisbee tournaments, then I've got a movie for you. That movie is "TRON: Legacy," a theoretically long-awaited sequel to an expensive flop that was released 28 years ago, in the dawn of the computer age, when the presumed target audience for this new movie had not yet reached zygote or embryo status, and was swimming formless in the cybervoid of pre-existence. That may or may not be the longest gap between original movie and sequel in Hollywood history -- it's a stupid question, and I'm not going to research it -- but it's a hell of a long time to wait for a visual experience that resembles sticking your head into a barrel of ink full of those daylight-fluorescent glow sticks from the dollar store.

Yes, I have seen "TRON: Legacy" in 3-D, on an Imax screen, and I guess that was supposed to leave me with eyes bleeding, soul shattered and mind utterly blown. I will admit, under protest, that some of the production design is impressive -- in a hackneyed and boring idiom that channels almost every science-fiction film of the '70s and '80s about an outsider who penetrates an evil futuristic community. Mix "Zardoz," "The Running Man" and "Rollerball," stir in a few extraneous elements like the Imperial Starfighters and the Batmobile, and serve with some newfangled CGI effects and a pace appropriate to the gamer audience's presumed attention span, and you've got -- well, hell, you've got this, but I'm making it sound a lot more interesting than it is.

Even the presence of one of America's most beloved and distinctive screen actors, revisiting a role he played half a lifetime ago, is weird and complicated instead of just fun and sentimental and alluring. Jeff Bridges returns as Kevin Flynn, the computer programmer turned spelunker who discovered, in the original "TRON," that the info-realm we thought consisted of ones and zeroes flowing through electronic circuitry concealed a metaphysical reality where lithe dudes in catsuits waged gladiatorial combat with lethal spinning discs and motorized beams of light. This clever if juvenile fantasy is the key to the long afterlife of "TRON," which tanked on first release but gained currency with subsequent generations of geeks and gamers, who saw in it their introvert obsessions imagined as metaphorical action-adventure (and maybe also a symbolic prefiguring of the Internet).

Like every scientific genius in every pseudo-profound sci-fi film ever made, Flynn has seen his creations turn against him, and he's been imprisoned in the subterranean digital realm since the early '80s, living in a Zen-themed cave-condo with an artificial rain curtain and a delicious digital concubine named Quorra (Olivia Wilde). Sadly, I'm not kidding about any of this, although this is a PG movie so the exact nature of Flynn's relationship with Quorra is not specified. I'm not a big fan of that dirty-old-man, May-November thing in general, but in this case I'm inclined to forgive. He's been stuck in the Empty Self Suite at the Digital Marriott for a long time, and she's a computer program. Not our place to judge.

As the imprisoned Kevin Flynn, Bridges brings about the only notes of humor and humanity and life to "TRON: Legacy," but he also plays Clu, a helper program or avatar or something who has turned against his master, and that's where things get unsettling. Kevin has aged on schedule in his digital purgatory, and looks like 60ish Jeff Bridges, but Clu is ageless, and looks like a rubber-faced Madame Tussaud replica of the 1982 Bridges. (And I have to say: Bridges is one of those magical Paul Newman dudes who seems to look better and better in late middle age.) Sure, the contrast is supposed to be striking, but I think director Joseph Kosinski and his vast special-effects crew are going for a certain flavor of weird-cool-creepy, when what they wind up with is more like get-me-out-of-here icky. Since I'm dispensing faint praise, let's mention Michael Sheen's performance as a rebel program turned Bowie-esque nightclub entrepreneur -- sort of a film-noir slimeball archetype -- and the electronic soundtrack by Daft Punk, who also appear as DJs in Sheen's club.

I haven't even gotten to the purported action hero of this purported action film, Flynn's son Sam, who is played by the muscular and utterly generic Garrett Hedlund. Left behind when Kevin vanished into cyberspace, Sam has grown up as a vastly wealthy loner eccentric, with a secret waterfront hideout, an appetite for rebuilding Ducati motorcycles and a penchant for fighting crime dressed as one of the dancing mushrooms from "Fantasia." Sorry! Most of that is true, but not quite all. Out there in the boring regular world -- which is rendered in 2-D (like, whoa, what if our world is like less real than other stuff?) -- Sam wages a sabotage campaign against the money grubbers now in charge of his dad's company, until Kevin's old ally Alan (Bruce Boxleitner) finally provides Sam the clue he needs to follow his dad into his vaguely porny second-rate battlebot fantasy.

My lordy, there's a lot of plot getting in the way of this movie's story (in the words of my own 1980s idol, Joe Bob Briggs), and for all the supposedly electrifying action set-pieces as Sam battles his way through the dystopian digital netherworld to his dad's lair and back again, the pace is like watching frozen marmalade slide down your driveway. In all seriousness, I've got no problem with a movie that seeks to engage our inner 11-year-olds (as well as actual 11-year-olds), and the influence of video games on action flicks is more a matter of form than substance. But I do think it's insulting for Disney to entrust a massive budget (reportedly $170 million) to a director with no evident ability for either drama or cinema, and then to end up with a leaden, inflated super-spectacle that's both so frenetic and so boring.

I've been meaning to opine on the subject of boredom as a misunderstood value in popular culture, but writing an entire essay on that subject might be tempting the Lord, or at least dangerously invoking the pathetic fallacy. Let's just say this: The works of, say, Andrei Tarkovsky or Richard Wagner strike many people as boring, and are hence widely avoided. But that kind of intentional and challenging boredom, dogmatic and overly medicinal as it may be, is as nothing compared to the boredom of endless distraction and wall-to-wall entertainment, the boredom of a culture where boredom is forbidden. That's the culture we live in, where the once-proscribed Pleasure Principle has become iron law and where the recycled, bloated, fish-belly emptiness of something like "TRON: Legacy" carries boredom to extravagant new heights.