"How Do You Know": A deliciously messy holiday rom-com

Pick of the week: Owen Wilson, Paul Rudd spar over Reese Witherspoon in the improbably delightful "How Do You Know" 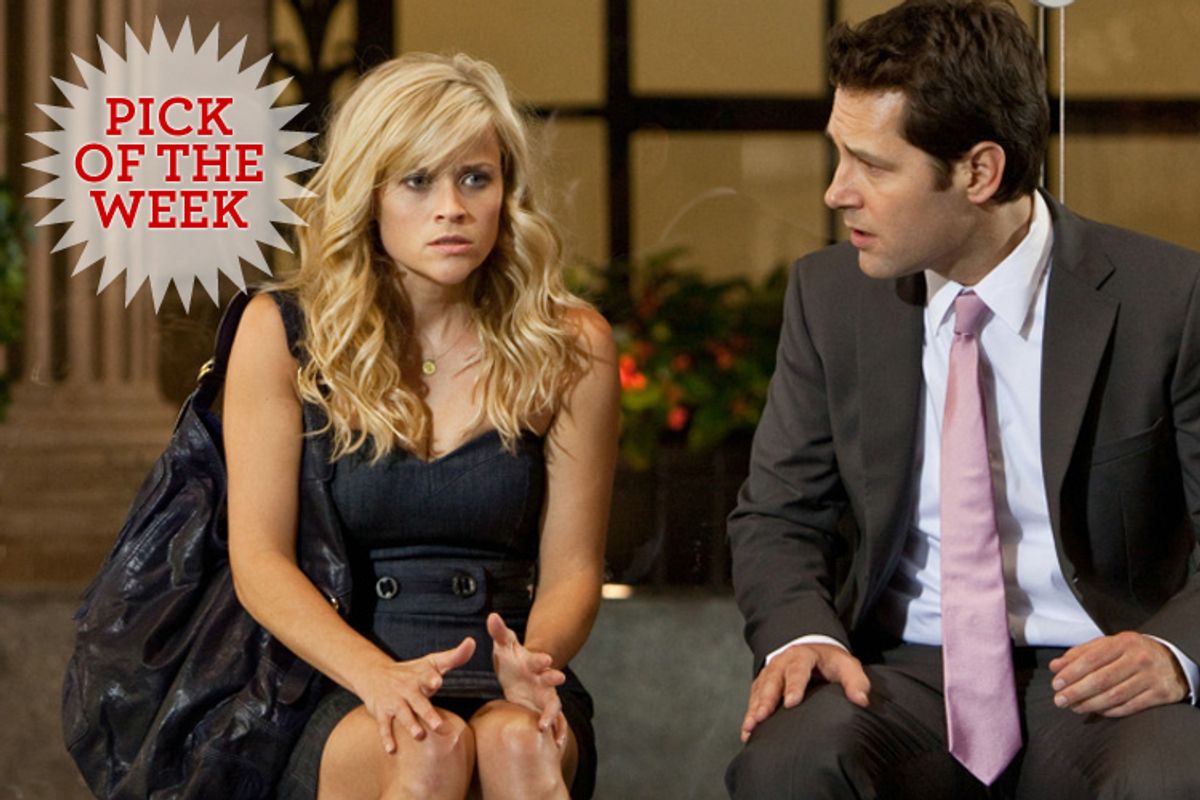 Reese Witherspoon and Paul Rudd in "How Do You Know"
--

In James L. Brooks' "How Do You Know," Jack Nicholson plays a growly, jowly, 70ish corporate patriarch named Charles Madison, whose son George (Paul Rudd) is the movie's awkward but likable leading man. Their relationship is loving, but perennially strained to the breaking point; Charles is a consummate bullshitter, a crappy parent and quite possibly a white-collar criminal. Their company is under assault from federal prosecutors, and in a central scene Charles warns George that things are likely to get worse. "I think you need to cut me off," he says, eyes and shoulders rolling in classic Nicholson fashion. "I don't trust myself not to manipulate you. I'm not even sure whether I'm doing it right now. I think I am."

Nicholson's presence is arguably more a problem than a strength in "How Do You Know." In essence, the movie is an ungainly but irresistible romantic-triangle comedy built around Rudd, Reese Witherspoon and Owen Wilson, with Nicholson rambling around its periphery like a demonic bear, part comic relief and part distraction. But in that moment of mock-self-knowledge I saw the presence of one of America's greatest screen actors, in an extraneous old-guy role, as purely symbolic: Nicholson is a stand-in for 70-year-old James L. Brooks, the genius of American comic melodrama, who is, after all, manipulating all the younger characters in the movie, and everybody watching it, the whole time.

I wouldn't call myself a Brooks fan, exactly -- that's like asking whether you're a fan of the Empire State Building. When you look at what the guy has accomplished in a pop-culture career that began on network television in the mid-'60s, impressive doesn't begin to cover it: From "Room 222" to "Mary Tyler Moore" to "Taxi" to "The Simpsons," before even considering the slow-burning movie career that began with "Terms of Endearment" in 1983. "How Do You Know" is only Brooks' sixth feature in the last 27 years, and like all the others -- the hits, meaning "Endearment" and "Broadcast News" and "As Good as It Gets," and the flops, meaning "Spanglish" and "I'll Do Anything" -- it's clumsy, lumpy and half-crazy in places. But even Brooks' bad films have something, call it life force or spirit or just good-heartedness, that sets them apart from the soul-munching Hollywood system, and his better ones are like mini-vindications of the entire American movie tradition.

You will have noticed (because you're clever that way) that I haven't yet firmly stated whether I think "How Do You Know" is one of Brooks' successes or one of his failures. Even more than is customary with Brooks, that's an individual question, and I can understand why some people I like and trust have declared it an unwatchable mess seasoned with therapeutic clichés. With me, though, it's different. After watching, and halfheartedly praising, a bunch of painfully flawed romantic comedies this year -- I shudder to recollect that I declared "Going the Distance" the summer's best rom-com, which is rather like picking your favorite case of shingles -- I want to sing hosannas to the heavens for delivering one made by somebody who damn well knows what he's doing. Is "How Do You Know" schmaltzy and manipulative and not entirely convincing as a portrait drawn from real life? Sure -- and it's also richly, goofily funny, loaded with terrific actors and delicious moments, and pretty much bursting at the seams with joy and affection. I cried. Twice.

Paul Rudd has been a movie star in embryo for what seems like a decade now, and as George he gets to play the half-hapless funnyman and the romantic lead in the same movie. (Whether he actually works for female viewers, in the latter category, is an open question.) George is a straitlaced, straight-shooting CEO -- we never find out what the Madisons' company actually does, if anything -- with an overanalytical math professor (Shelley Conn) for a girlfriend. His sudden fall from that pinnacle, when the feds come after the company, is one of those wrenching Dickensian tumbles that's meant to reveal a character's true nature. Within a few weeks, he's unemployed, nearly penniless and single, having sold his fancy Washington apartment and gotten dumped by the math lady. ("I'll be here for you when this is all over," she helpfully assures him.) So he ends up, one night, going on a haphazard blind date with Lisa (Witherspoon), an elite athlete who has just gotten cut by the U.S. national softball team.

It's a timeless formula: Two characters going through major life changes, but who don't seem quite right for each other. George is a big talker, something of a closet intellectual, a guy from a messed-up rich family who spends too much time in his own head (not to mention too many nights getting drunk and singing Teddy Pendergrass into his lamp). Lisa's bright enough, but she's an athlete -- a class of human being often sentimentalized in the movies, but rarely explored below the surface. Her bathroom mirror is covered with positive-thinking Post-its: ritual invocations to swagger, or to reject fear or stupidity. ("There are three kinds of players: 1) Players who don't know what's happening; 2) Players who watch what's happening; 3) Players who make it happen.") Brooks is neither mocking nor endorsing her self-help nostrums, but if anything George is a little envious of Lisa's relentlessly positive attitude and her refusal to be dishonest with herself.

Their first date goes nowhere, and anyway Lisa is seeing Matty (Wilson), a blond, muscular, preening star ballplayer. (The idea that the Washington Nationals have a $14 million pitcher -- and that he's in the bullpen -- may strike baseball fans as one of this movie's major failures of verisimilitude.) Matty is in many ways Brooks' supreme creation here; indeed some viewers may feel that he's such a blast Lisa shouldn't ditch him for nerdly Mr. Right over there in the corner. Matty's a shameless rake who keeps a supply of girly toothbrushes and personalized logo hoodies on hand for his overnight guests. But he's by no stretch a bad guy, just a vain, rich and pampered one, and he's clearly smitten with Lisa, so much so that when she asks whether they're being monogamous he responds, "Pretty much." (The film's title comes from a bullpen conversation between Matty and a fellow pitcher about how you know when you're in love; I won't spoil the punch line.)

Lisa likes Matty pretty well, and it seems entirely possible that he can be domesticated. He gives Lisa a zillion-dollar diamond watch to indicate that they're "engaged to be engaged," and solicitously offers to eat with the Christians at a team barbecue rather than expose Lisa to his horndog teammates. But George has gotten under Lisa's skin, and like any romantic heroine she's wrestling with herself and preparing to throw away all certainty. Early in the film, George asks her, "Do you ever wish you could push the delete button and erase everything you're saying -- even while you're saying it?" She literally doesn't know what he's talking about, because she's a person who has trained herself to avoid that level of self-doubt. All that is about to change. If Witherspoon has fewer histrionics than either of her beaus, she gives a composed, quiet performance that shines out of the center of the movie like a blond beacon. The story of her internal transformation, told over a couple of half-accidental encounters with George that rank with the best scenes Brooks has ever written, is its internal motor.

Nicholson's Charles prowls around the edges in Mephistophelean fashion, continually demanding that George choose between unpalatable alternatives, but it's Kathryn Hahn, as Annie, George's ultra-pregnant, hormone-crazed ex-assistant, who nearly steals the movie entirely. Allowing a goofball minor character to rob focus from the central couple -- and then to serve as the instrument that brings them together -- is a purely Brooksian move. He is so steeped in Hollywood formula that he believes it, inhabits it, overcomes and transcends it, all at the same time. "How Do You Know" is in no sense a perfect movie, and if its combination of shameless sentimentality and willful eccentricity simply sets your teeth on edge, I'll understand. Me, I think it's a wonderful home-for-the-holidays flick, defined by the wonders of young love and the wiles of old age.

How Do You Know Movies Our Picks The Simpsons