Kill off the "Little Fockers"! 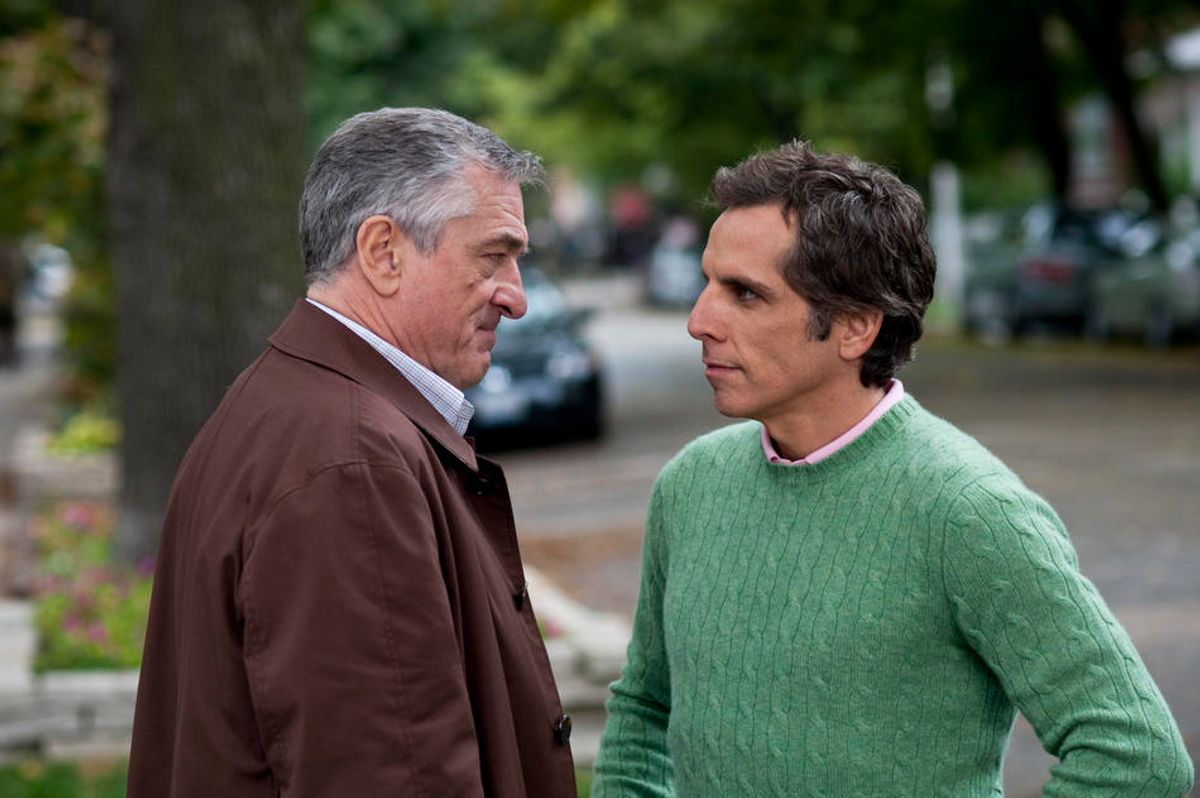 As I suffered through "Little Fockers," wishing that I could have periodontal surgery instead and wondering exactly how I wound up a member of the bizarre cadre of human beings who watch movies like this because it's our job, I managed to identify a silver lining of sorts. I'm fairly sure that Robert De Niro views his role in this lamentable comic series, playing a Midwestern Irish-American ex-CIA agent named Jack Byrnes, as something of an acting exercise. Can this consummate New Yorker shed his accent, his inflections and expressions and body language and everything else that's encoded into his Italian-American DNA? He kind of can, and it's intermittently fun to watch De Niro, whose every impulse is to go outward and upward, as a guy who drives all emotion downward and inward.

Yeah. OK. And maybe it's also a study in actorly technique when Jack has his son-in-law and long-running adversary, male nurse Gaylord "Greg" Focker (Ben Stiller), give him an injection in his fully erect whangdoodle? Or when Jack and Greg's dad, Bernie Focker (Dustin Hoffman), exchange fart and booger jokes around the extended-family Christmas-Chanukah table? Those things are of course the entire point of the Focker franchise, which weds its aging, high-prestige cast to a set of creaky, homophobic gross-out gags that would make many eighth-graders roll their eyes in embarrassment. Can we talk about something extraneous again now? Since female stars like Nicole Kidman get so much grief for what looks like botched cosmetic surgery, what's the deal with Ben Stiller's eyes? Greg and/or Gay (Gay Focker! Gay Focker! Just try to keep the Sierra Mist from coming up your nose!) looks mysteriously, er, youthful these days -- in a cadaverous, guyliner-y kind of way.

Six years after Hoffman and Barbra Streisand joined the party in "Meet the Fockers" and a full decade after the original "Meet the Parents" (a mostly harmless exercise in paranoid family comedy, taken by itself) it seemed reasonable to believe there was no more Fockery goodness at the bottom of that well. Original director Jay Roach has had the good taste -- well, let's say the common decency -- to move on, but Universal Pictures has reassembled the entire gang under director Paul Weitz, which can only mean there's more mixed-audience holiday coin to be made here. So we get Streisand as Greg's mom, TV sex-chat host Roz Focker, making out with Owen Wilson, as the puppyish rich boy who hangs around waiting for a second chance with Greg's wife, Pam (Teri Polo). And Hoffman sweatily dancing flamenco. And Greg and Jack being mistaken for lovers by a New Agey school principal (Laura Dern) and then punching it out in a birthday-party ball pit after a misunderstanding that involves a hot Latina chick in sexy lingerie and Greg's miserable efforts to become the family's "Godfocker." They kill me, these guys. No, seriously. If they make any more of these movies, they might as well kill me. Once more with feeling: Gay Focker!