The rise of the tween "fashionista" plague

Willow Smith, Elle Fanning, among others, are now "style icons." Are we warping what it means to be a kid? 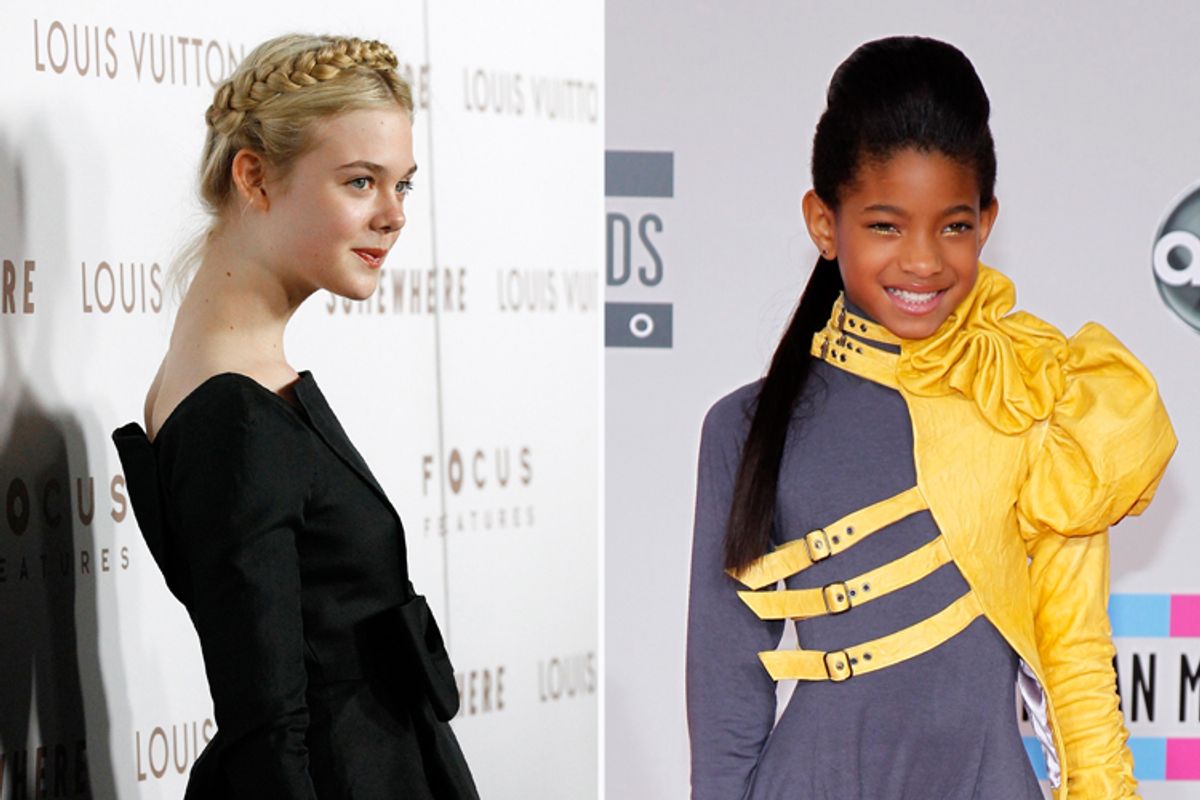 Fanning, the rapidly pubescing younger sis of Dakota and star of Sophia Coppola's new film "Somewhere," is undeniably a fashion-forward young lady. She rocked some serious Chanel for a recent spread in Interview magazine, says she loves vintage clothes; she even manages to make haute couture somehow vaguely kid-friendly. In case you were wondering who can actually pull off designer Mary Janes, the answer is: willowy 12-year-olds. And she's far from the only much fawned-over style conscious tween in the universe. "Kick-Ass" star Chloe Moretz is a 13-year-old "fashionista" with a "timeless, classic style,"  and 10-year-old Willow Smith just made the Guardian's "alternative best-dressed list" for her "sartorial superiority." And have you heard how she's currently got her eye on designing her own clothing line?

It's no secret that lots of girls are attracted to fashion. (They're also utter geniuses at sizing up a Golden Globes gown and improvising their own version out of a Target T-shirt and old buttons.) I have two daughters myself, am ergo currently in the throes of what will someday go down as the Great Jeggings Crisis of 2010. It's not news either that fashion loves young girls. As a card-carrying member of the Love's Baby Soft generation, I am of the demographic that gave the world Brooke Shields, her finely toned 14-year-old butt and Calvin Klein.

So I take no issue with girls dressing up, trying on every sparkly, shiny thing a young lady can get her little mitts on. And I'd rather my own daughters take their wardrobe cues from a stylish but age appropriate star like Abigail Breslin than say, Ke$ha. But 30 years after Brooke and her butt, nearly 20 after the Kate Moss waif thing, I have to ask -- why are adult designers and writers still breathlessly fawning over preteen girls and their preteen girl bodies? The ludicrousness of it was neatly encapsulated by Interview's entertainment director Lauren Tabach-Bank, who said Wednesday of Elle Fanning that "It sounds crazy to say someone has a good figure at 12 -- but she captures a youthful spirit." Let me get the order straight -- the 12-year-old has a) a good figure and a youthful spirit? Perhaps because she's 12?

And that's the rub. The eagerness of designers and the press to seize upon children and dub them "fashionistas" isn't about kids trying mom's platforms -- it's about a relentless and incredibly twisted industry that worships at the altar of not-even-womanhood. Because if you're Marc Jacobs or Proenza Schouler or any of the designers making clothes ostensibly for adult women but eagerly peddled out to high profile middle-schoolers, you're essentially saying your wares look best on females who perhaps have not yet even started menstruating. And if you're a journalist fawning over how those Valentino and Rodarte dresses "look good" on a child, you are part of the problem, big time.

Of course plenty of self-respecting tweens know their Gucci from their Pucci. (Thank you Tim Gunn!) Of course designers will instinctively flock to human mannequins who resemble clothing hangers as closely as possible. But it's dispiriting as hell to consider that by the time my daughters turn 13, they'll have apparently already aged out of the optimum life era for being the height of fashion, that absolutely zip has changed in sartorial mores in the decades since I was a designer jeans aspiring tween. And I don't buy the lip service paid to the "Oh, but she looks so cute!" BS either. That's not even about sexualization; it's about a horribly twisted vision of both girlhood and womanhood. You put kids in $10,000 dresses and you're saying something seriously messed up, to both kids and women. Being "age appropriate" isn't about being decked out in Chanel, ever. I want better for Elle Fanning. And I want better for my daughters.