PETA's man of the year accomplishes what Natalie Portman and other celebs can't: He makes a healthy diet realistic 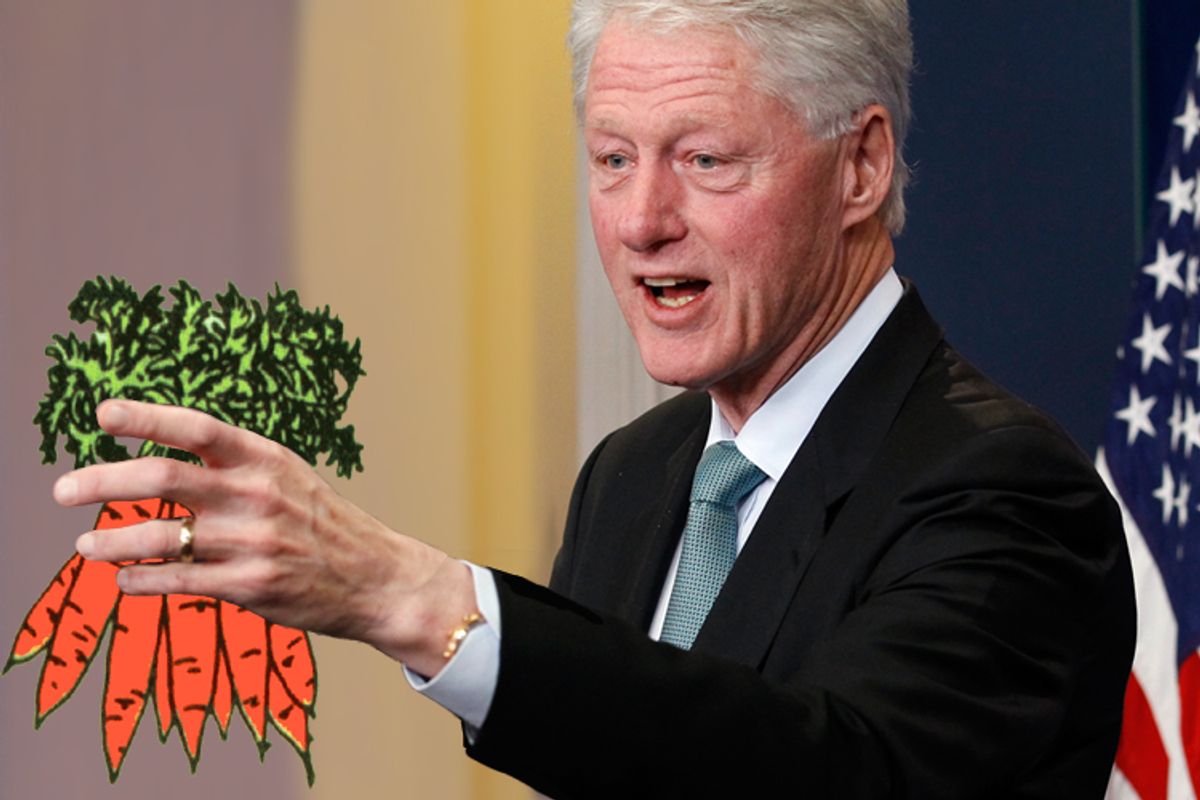 When you think of vegans, the popular image tends to run toward the fragile-looking, vaguely smug person with the hemp tote and the mung beans in front of you at the checkout line. Maybe you think of a well-paid young actress who compares meat-eating to rape, or the kind of trying-too-hard electronica musician Eminem would pick a fight with. You probably don't picture a notorious voluptuary, a man who just last year was chowing on double burgers right before a conference on obesity.

Yet Bill Clinton, the former leader of the free world and one of the best friends a Big Mac ever had, has done what a legion of Morrisseys and Pamela Andersons could not – what even Michelle Obama struggles with  -- he's made moving toward a healthy, plant-based diet seem realistic, accessible and, frankly, pretty damn good-looking. If that 64-year-old good old boy can become PETA's Man of the Year, surely even you and I can pass up a brisket and a milkshake now and then.

Clinton's conversion -- from bacon enthusiast to a man who bragged to Wolf Blitzer back in September that he weighs what he did in high school -- was motivated by serious health concerns, as it is for many. He's already endured quadruple bypass surgery. And after getting two stents in his heart last winter, Bubba took a hard look at his lifestyle and realized "I didn't want it to happen again." And then, like the Rhodes scholar he is, he did his homework. He found a compelling, overwhelming body of evidence that eschewing meat and dairy can dramatically help the body "heal itself."

Clinton isn't a strict vegan – he admits he still eats fish occasionally. He's certainly no monkey-liberating activist, and God willing, he won't be appearing nude in any future PETA ads.  And America still has a long way to go toward accepting the socialist tyranny of what Glenn Beck refers to as Michelle Obama's ruthless campaign to "put carrots in front of us."

But Bill Clinton is compelling because he has never been someone who exudes a sense of deprivation. Even now, looking slim and statesmanlike, he can talk about forgoing dairy products without making it look like he's gritting his teeth through some joylessly strict regime. His vegan daughter Chelsea's wedding  this summer was, by all accounts, a lush, gourmet affair.

And while pundits like Wolf Blitzer may still see eating fruits, grains and vegetables as a move away from "fun foods," there's something about the transformation of a man who was right there first in line for those "fun foods" that makes a persuasive case for recalibrating our notion of "fun." Arterial blockage – not so fun! Obesity, diabetes and cancer – less fun than a pineapple, I swear.

I'm not a vegan – and the presence of both "Baked" cookbooks under the tree this years assures my continued, passionate relationship with butter. I'm not even a vegetarian, as the roast chicken on my Christmas table would attest. But like a lot of people, I've watched "Food, Inc." and read  "The Omnivore's Dilemma"  and have, in recent years, taken a different approach to the food my family and I consume – what it is and where it comes from. For now, Mark Bittman's eternally simple, unfussy approach – making the "conscientious carnivore" choice to try to go "vegan before dinnertime" fits my own lifestyle and needs. But much more significantly, it's opened me to experiment with new foods and new ideas about eating. I wouldn't sign up for some Lenten slog of suffering any more than, I imagine, Bill Clinton or my picky, pizza-devouring daughters would. And anyone who thinks our choices are between deliciousness and some tasteless soy loaves just isn't trying hard enough.

Change doesn’t happen overnight, either for individuals or nations. But it is happening, in unexpected corners. Even my own local grocery story in a low-income, predominantly Latino neighborhood -- a place that sells pork rinds at the checkout -- has in the past year added organic produce and a wide aisle of exotic grains. Trust me, the day you can find red quinoa at the C-Town, there's a seismic change going on out there. Bill Clinton has the luxury of support and counseling and can get the world's best tempeh any time he wants. But he probably had to work on his mindset and habits as much as the next guy at the drive-through, and less than a year later, he sure doesn't seem either miserable or self-righteous. He's a guy who always liked food, who still likes food. And that's the point -- it's not about what you give up, it's about what you get. And when the food industry hands us a corn-syrup-soaked and factory-farmed health crisis, we can get healed. We can get happy. And we can definitely get full. Sounds like fun.