Ashton Kutcher schools us on the coming apocalypse

The "survivalist" may be punking us in a new interview, but he's right about one thing -- you're a bunch of wussies 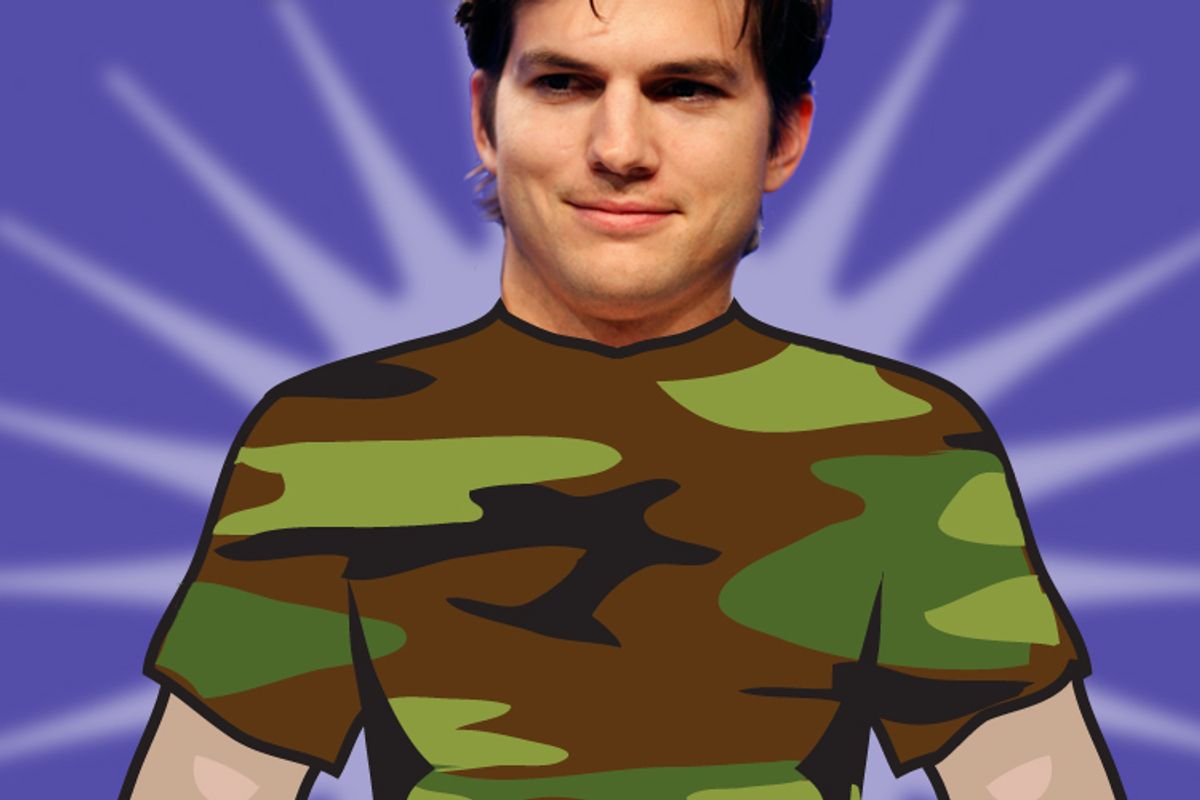 When it all hits the fan, Ashton Kutcher's abs will save the world.

In an undeniably kooky interview for the new issue of Men's Fitness, the "Dude, Where's My Car?" star explains his motivation for keeping in shape. It's not to keep himself bankable as a movie star. It's not because Demi likes a man with a little definition. It's so that when our fragile civilization turns into a Michael Bay movie, he will not be the nerdy scientist/rookie cop/loveable old timer with two days till retirement. "All of my physical fitness regimen is completely tailored around the end of day," he explains. "I stay fit for no other reason than to save the people I care about."

"End of day"? When did Kelso become Kirk Cameron? The 32-year-old actor jogs around the canyons near his California home, does intense Bikram yoga, and has started learning the Israeli self-defense technique of Krav Maga, eschewing only pole fitness in his pursuit of trendy workouts. Sounding less like a sex symbol and more like a guy who bangs out manifestos on a Remington, Kutcher says, "It won’t take very much, I’m telling you. It will not take much for people to hit the panic button. The amount of convenience that people rely on based on electricity alone -- you start taking out electricity and satellites, and people are going to lose their noodle." He then reminisces fondly about losing power in their family's cabin in the mountains last Christmas: "It was 20 below zero. I got my guns out. We made a fire. We went to the grocery store, and the doors were open because they’re all electronic. People were rolling in and out, clearing out the shelves. It was like a preview" of what's to come.

Now, I can't tell if the guns Kutcher is referring to here are of the semiautomatic or bicep variety, nor can I state with any great confidence that the creator of "Punk'd" isn't having us on, and is right this moment sipping beelines in a private jet while playing Super Mario. After all it's a bit of a tough nut to swallow that the king of Twitter gives a crap that "People don’t have maps anymore. People use their iPhones or GPS systems, so if there’s no electricity, nobody has maps … What happens when all our modern conveniences fail?"

But I'm going to say something here I never imagined I'd write. That Ashton Kutcher guy has a point. Even more horrifying, it's the same valid point Sarah Palin occasionally lands on amidst her numerous nuggets of nonsense. We are astonishingly dependent on technology. And technology fails all the freaking time.

The recent havoc wreaked on London's air transportation system after a far-from-snowpocalyptic six inches of the white stuff, the horror show that left 400 passengers stranded for hours on a New York subway and the current nightmare unfolding in Moscow's airport proves that something as simple and uncontrollable as the weather can cause all hell to break loose. And that's just the realm of not even catastrophic acts of nature. Consider a few other possibilities -- say, a mining mishap, an oil spill an earthquake -- and any notions that the works won't get gummed up again soon (and in ways we can't imagine) begin to fade. As Carrie Fisher once chillingly summed it up: "Someone can change the course of history with a box cutter."

Having lived through a terrorist attack, a major blackout and more STORMS OF THE CENTURY than you can shake a windbreaker at in the past decade, I can safely say that somehow, society as a whole doesn't seem to fall utterly apart even in the face of catastrophe. Even in the worst of times, I've yet to look out my window and think, wow, it's like a Cormac McCarthy novel out there.

But the way many of us who live in the relative comforts of the developed world take for granted that the heat will turn on, the phone signal will be sufficiently strong and that our food will come from the place it always comes from -- the supermarket -- does give pause. I'm not saying we'd all be better off if we learned to chop down trees or wrestle bears, but it sure couldn't hurt to have an emergency supply kit, a degree of physical fitness and some mad first aid skills. Whether the four horsemen show up or not, competence and self-reliance are always empowering. It doesn't have to be all weird and Branch Davidian. It doesn't even have to be the rather paranoid rantings of a handsome actor. But when Kutcher says, "I'm going to be ready to take myself and my family to a safe place where they don’t have to worry," it implies a degree of foresight and protectiveness that's quite admirable -- and exceedingly rare. So while civilization may never need Asthon Kutcher to come to its rescue, his words are a helpful reminder to check the batteries in the flashlights and portable radio. And as a model of disaster preparedness, he may have found his best role yet.