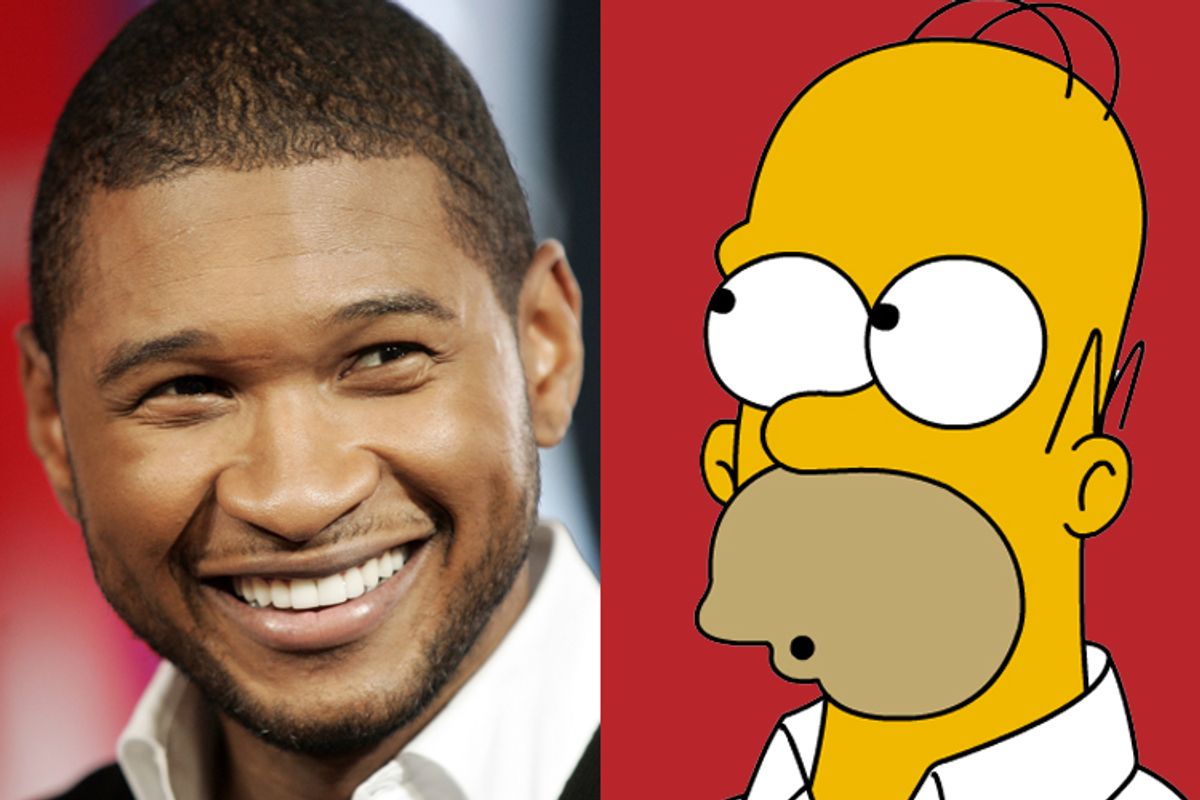 Did Usher rip off Homer Simpson?
--

Thank you, Internet. You've proved again that the relentless quest for transparency does not belong solely to Julian Assange. In the past few days alone, you've ripped the lid off scandals involving two beloved entertainers: Usher and Alf. Well played. Well played, indeed.

First, in a clip more damning than a week's worth of Mel Gibson voicemails, television's wisecracking alien from the '80s was exposed as a profanity loving, N-bomb dropping and sexually harassing beast. A clip of none other than Alf improvising -- in a decidedly racially tinged, lascivious manner – on the set of his eponymous sitcom abruptly went viral on YouTube, sending shock waves that reverberated all the way to Melmac. Perhaps you thought you could hide your epithet-strewn homage to that very special, Tourette's-themed episode of "L.A. Law" in the mists of time, Mr. Alien Life Form. Perhaps you thought no one would ever find out about your invitation to your costar Andrea Elson to "straddle me." Perhaps you underestimated eBay, where a savvy shopper was able to obtain the original video a decade ago, or biohazardgraphics' YouTube channel, where it was posted a year ago, or the BadTV blog, which took note of the clip last week, or TMZ, which by Tuesday had drummed up both Alf's producer to defend the clip and his costar John LaMotta to call the show the "worst work I ever did." I guess we know now why you haven't worked much in the past 20 years. And I hope you realize now that the Net community will never stop until it unearths every skeleton in your closet, you despicable, cat-eating S.O.B.

Yet even as Alf-gate rages on, another potentially career-buckling scandal has erupted, thanks once again to the diligence of eagle-eared geeks. It was earlier this year that the good folks at Mississippi radio station Y101 first noted an uncanny similarity between Usher's monster hit "O.M.G." and a seven-year-old, holiday-themed ditty straight from the fertile mind of Homer J. Simpson. YouTuber youtimdotcom went the extra mile and posted the contentious verses – and left it to listeners to discern Usher's "Honey got a booty like pow pow pow" from Simpson's "Christmas in December, wow wow wow." For shame, Mr. Raymond, and double shame to your songwriter will.i.am.

The clip remained largely unremarked upon until a few days ago, when, perhaps due to the festive nature of the season, the comparison suddenly went viral. Soon, the mainstream news was all over the burning controversy. Usher, you got busted, dude, LOL oh LOL!

The world of hip-hop and R&B is rife with sampling and mashing up – preferably from as unorthodox a variety of sources as Rick Rubin can dream up. But there is a fine line between paying tribute to an AC/DC riff or a James Brown whoop and taking the express train to "My Sweet Lord" town. And if you cross it, you will be found out and have the living daylights mocked out of you.

Was Alf really a racist, misogynist creep? Are will.i.am and Usher plagiarizing the pride of Springfield? It's an outrage, I tells ya! Also, does anyone notice that at least two of the parties involved in this whole dustup are not real humans? That's not to suggest that the writers of "The Simpsons" and Paul Fusco, the creator and voice of "ALF," aren't -- or that their past words and actions have no consequence now. Obviously they do, or both of these stories would not have ignited such a deluge of fascination. But what's really intriguing about both these nuttily viral tales -- aside from the possibilities that Paul Fusco finds Tourettes hilarious and that will.i.am will rip off anything -- is how beautifully they illustrate the you-can-run-but-you-can't-hide nature of the Internet and its hilariously persistent community. Whether it's international state secrets, appalling family photographs or the vaguely pieced together remnants of an out-of-control evening, if it's out there and it can embarrass somebody, that laundry is getting itself aired. And why? It's not just that both of these clips are absurd (although they truly are) -- it's that they're so damn random and odd and obscure. Yet dedicated pop culture treasure seekers somehow managed to dig through the vast ephemera to find them, for no other apparent reason than the pleasure of sharing the message with the world. And amazingly, the world has eagerly received it. Somewhere, there's footage of Jem drunkenly making out with all of the Holograms and the Crypt Keeper playing innocently with a kitten. Go ahead, Net sleuths. Make it so.