The singer goes on a vicious, homophobic Twitter rant after completing his rehabilitation for beating Rihanna 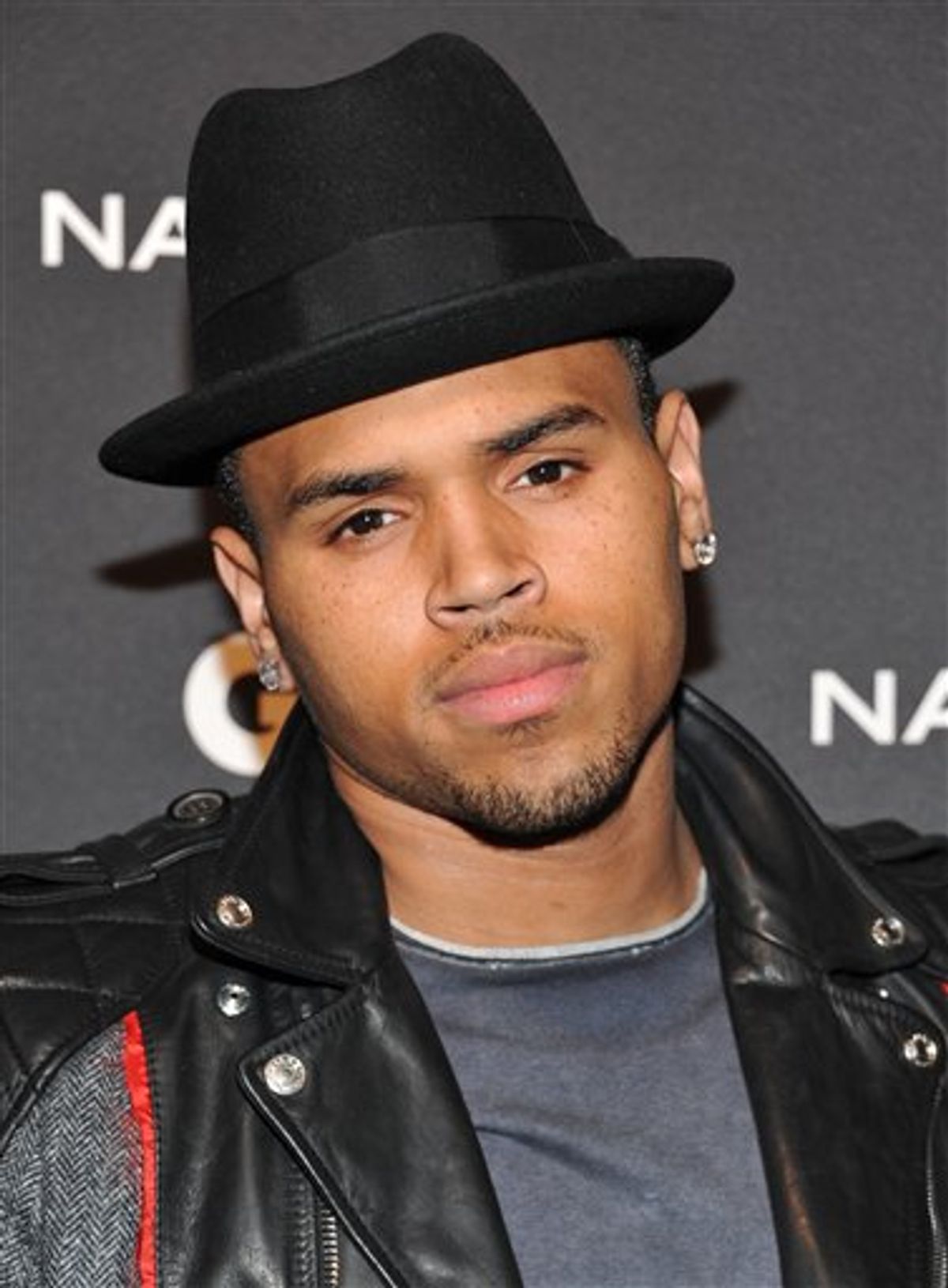 Everyone deserves a second chance. On Wednesday, Chris Brown used up his.

Just last week, the convicted abuser who assaulted then-girlfriend Rihanna nearly two years ago in a beating heard round the world, was showing off his certificate for completing a 52 week domestic violence course. But the man who announced last year he wanted to be "a role model" -- who said, "I want to definitely be a man and learn who I am and learn how to control emotions" -- behaved like neither a role model nor a real man when singer Raz-B offhandedly tweeted, "Im just sittin here Thinking how can niggas like @ebenet & @ChrisBrown disrespect women as Intelligent as @HalleBerry11 @Rihanna." That seems to have been sufficient provocation to undo all that anger management Brown's been striving toward. He swiftly – and crudely -- shot back, "nigga you want attention! Grow up nigga!!! Dick in da booty ass lil boy."

Ah, the old "You're such a homo" retort. Always a classic. Brown soon followed it up with another charmer: "Tell me this @razb2k!! Why when the money was coming in u won't complaining about getting butplugged! #homothug!!!" [Update: Though Brown insisted on Twitter Wednesday that "I ain't deleting my tweet either!" he has in fact done just that, likely around the same time he posted a few new, not Raz-B-baiting messages around noon Thursday. He did however leave up his earlier tweet that noted, "when I need tips on how to demolish my career I'll call ya!!!!!" Don't worry, Brown, you're doing a stellar job demolishing your career all by yourself.]

Brown's snide "dick in da booty" remarks would be disgusting directed at anyone, gay or straight, regardless of the motivation. But what makes them particularly reprehensible is that Brown was referring to Raz B's very public allegations that his former manager Chris Stokes and label mate Marques Houston had molested him when he was a preteen.

Raz-B first told his story three years ago, then mysteriously recanted it in a terse "the allegations are not true" message soon after.  He has however recently gone back to his original version of events -- with harrowingly explicit corroboration from label mate Quindon Tarver.  So for Brown to insist to his Twitter followers that "i love all my gay fans and this immature act is not targeted at you!!!!" and that "I'm not homophobic! He's just disrespectful!!!" after glibly telling Raz B "merry christmas. i just gave you 20 thousand more followers.. u shouldve did this first instead of telling the world you got raped" is beyond ignorant – it's downright vicious.

Raz B certainly has many miles to go toward enlightenment himself. Throughout his sex abuse allegations he has been quick to note, "I'm not gay, I'm a real man." And in his tweet war, he's certainly dished out plenty of vile stuff himself, asking Brown, "Do you hit your boyfriend [songwriter] @andre_merritt like you do your women?" and accusing him of being "homosexual on the low!" before throwing in the perfunctory, "i want to apologize for fostering homophobia tweets.. this has nothing to do against my followers..."

Thanks so much, both of you. Glad you cleared up that when you accused each other of being paid for sex and getting it "on the low" you weren't being homophobic. Who could take offense at that? You're certainly not making light of sex abuse either, or moronically confusing being molested with being homosexual. And Raz B, your brother is surely not living up to every dumb, dangerous gangsta cliche by threatening to "put my motherfucking pistol" in Brown's mouth.  Nice work, guys – you've managed to broadcast your idiocy to the world, 140 characters at a time, and proven that hip-hop wars no longer need be conducted exclusively outside of Hot 97.

But it's Brown who emerges as the winner, class A creep division, in this whole ugly fiasco, for being the man who took the understated observation that he "disrespected" the woman he battered as a excuse to mock someone for saying he'd been sexually abused. He gets extra points for whining, "its wack as fuck that everybody can bash me... but soon as i defend myself its world war 3. I TAKE SHIT FROM everybody..." Apparently Chris Brown's notion of defending himself is accusing someone of not sufficiently "complaining" while his alleged molestation was going on. Right, because the only argument older than that "You're so gay" tripe is the enduring one-two of "You must have been asking for it" and "You don't act enough like a victim to be one." They're both so handy -- especially among perpetrators. And while Chris brown may have a freshly minted certificate saying he's no longer a domestic batterer, he clearly still knows plenty about the way an abuser's mind works.