Did immigration law cost Arizona a seat in Congress? 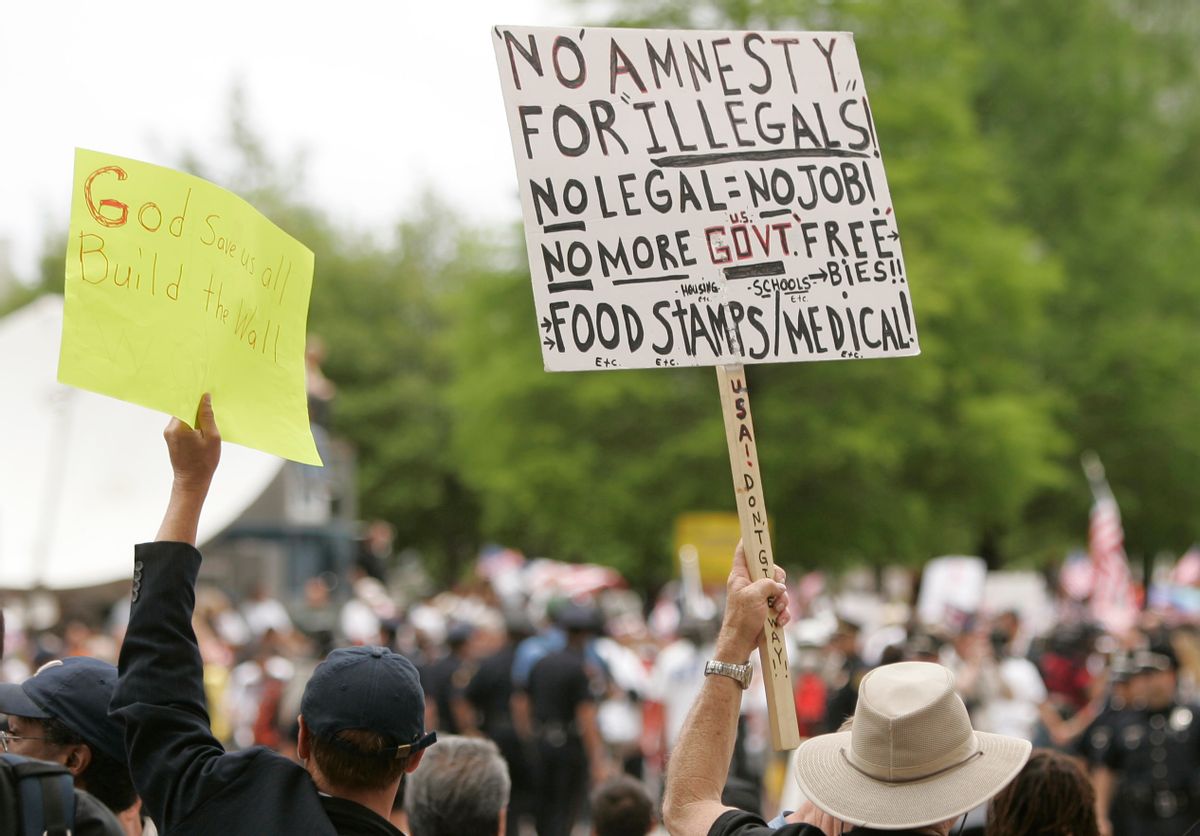 Anti-immigration demonstrators hold signs at an immigration rally in Dallas on Saturday, May 1, 2010. Large crowds were expected in Dallas after a new Arizona law passed requiring authorities to question people about their immigration status if they are suspected of being in the country illegally. (AP Photo/Mike Fuentes) (Associated Press)
--

Many predicted that Arizona's crackdown on immigrants would cost the state in dollars and reputation. It may have also cost the state an extra seat in Congress.

When the final census numbers were released just before Christmas, Arizona was awarded a new seat in the House, thanks to its status as the country's second fastest growing state. As impressive as this seems, it was actually something of a letdown for the state, whose official census count for 2010 (6,392,017) was more than 200,000 people smaller than estimated just a year earlier. That disparity killed whatever hopes Arizona had of replicating the two-seat gain it posted after the last census, back in 2000.

The reason for Arizona's weak census showing is now the subject of some debate. The housing bubble collapse clearly slowed population growth, in part by stemming the flood of native and immigrant workers migrating to the state for jobs in the construction industry -- a phenomenon that seems to have played out in several other burgeoning states. But unlike other boom states, Arizona’s final census count came in far under estimates, which were adjusted to account for the recession’s weak growth.

This has led some to point to a more specific cause: the anti-immigration law that Arizona enacted last year, which requires local police officers to determine the immigration status of a person "where reasonable suspicion exists." Attacked as unconstitutional by some, the law, known as S.B. 1070, set off a fierce national debate and prompted boycott threats. In the state, many undocumented immigrants feared that a routine interaction with local law enforcement could lead to deportation. According to political demographer Kimball Brace, the president of the nonpartisan political data analysis firm Election Data Services, many residents without legal status moved out or simply refused to answer the door when census enumerators knocked.

A second seat for Arizona was "iffy" but long considered a possibility, said Brace. "That possibility clearly went out the window with the immigration crackdown."

Arizona needed 325,139 more people in the 2010 census count to win a second seat. As recently as September, an Election Data Services projection showed the state coming up just 30,157 short.

"What we see in final numbers is that the margin for the second seat was much larger than the estimates were saying," said Brace. "I think the reason they were further away is because of the illegal immigrant controversy that was taking place at the time. That vote on illegal immigrants not being wanted in Arizona was taking place right as the census was being taken."

Anti-immigrant sentiment runs deep in Arizona. S.B. 1070 follows on the heels of a 2008 law that punishes employers for hiring undocumented workers. In Maricopa County, Sheriff Joe Arapio leads posses of deputized civilians on aggressive immigration sweeps through Latino neighborhoods, a tactic that has also drawn Justice Department scrutiny. Ironically, the state's new House seat will likely be located in Maricopa and neighboring Pinal County, thanks to their fast growth.

Some disagree with Brace's analysis, arguing that the collapse of the housing market had a far greater impact.

"Rapid increases followed by rapid declines in the rate of growth in Arizona's population between 2000 and 2010 were driven by the real estate boom followed by the Great Recession," Brian Gratto, a professor of history at Arizona State University, said in an e-mail message. "It is possible that the controversy over S.B. 1070 led to some outmigration, but that highlights a minor factor instead of the major one."

Tom Rex, an economist at Arizona State, says that while Arizona’s anti-immigrant climate did not cost the state a second seat, it was still a major factor in slowing population growth.

"The only way I can explain this is that Arizona's unique anti-immigration laws -- first the employer sanctions law that went into effect at the beginning of 2008, then S.B. 1070 that was debated and passed quite near the April 1 census date -- had the effect of either causing undocumented immigrants to leave the state or causing those that remained to not participate in the census in a greater proportion than the national average."

The housing collapse also had a major impact in states like California, Nevada and Florida, where the boom and bust were similarly turbulent. Nevada, the decade’s fastest growing state, now has an unemployment rate of 14.3 percent, compared to 9.4 percent in Arizona, which experienced the second highest growth rate.

Also, only 69 percent of Arizonans responded to the census' mailed questionnaire, significantly below the national average of 74 percent and below the rates in other centers of the housing bust like Nevada, Florida and California. That could indicate a higher undercount of undocumented immigrants.

"You can't say it was only one and not the other factor," says Brace. "But, of course, the immigrant crackdown was mainly a factor in just Arizona. It really didn't play much a part in other states."

Last May, Latino leaders and local census officials expressed concern that Latino residents of Arizona would be afraid to answer the census or meet with a federal-employed census employee. They cited plummeting Latino attendance at events ranging from parent-teacher conferences to Cinco de Mayo parades. The Census Bureau and local governments mounted an intensive campaign to encourage all residents -- legal or otherwise -- to participate in the 2010 count. The Constitution requires the federal government to count the entire resident population every 10 years.

"There are many anecdotal accounts of families, many immigrant, many mixed among immigrant and U.S. born, who have decided to leave Arizona because of the overall hostile and discriminatory policies toward immigrants and toward Latinos," according to Arturo Vargos, executive director of the National Association of Latino Elected and Appointed Officials. "Arizona's policymakers may yet again have cut off their nose in spite of their face."

Also in May, a group of prominent Latino evangelicals called for undocumented immigrants to boycott the census. Most Latino leaders countered that such a boycott would undermine the power of the community’s own congressional representatives, who tend to support immigration reform. But the debate over whether to participate in the census count highlighted immigrants' long-simmering anger over being discounted in Washington.

Nationwide, the impact of undocumented immigrants on reapportionment is undeniable. In Texas, California and New York -- all states with large immigrant communities and outspoken anti-immigrant politicians -- non-citizens, who cannot vote, protected existing House seats and added new ones. According to the nonpartisan political data analysis firm Polidata, Texans can thank non-citizens for two of their four new House seats. The state earned their fourth seat by a margin of 99,000 people. Without non-citizen immigrants, Florida would have gained just one seat instead of two (with a 113,000-person margin), New York would have lost three rather than two, and California, which had a cushion of 118,000 people, would have lost a staggering five seats instead of none. Polidata's statistics combine non-citizen immigrants with and without legal status. Undocumented immigrants make up about half of that total nationwide. The figure also does not include estimates of the number of citizen children born to undocumented immigrants who would have also been counted. Latina immigrants have a fertility rate of 3.1, one point higher than the average. Polidata arrived at its estimate for citizen population by subtracting a projected number of non-citizens derived from the 2009 American Community Survey.

"The irony is that Latino immigration had its biggest impact in improving political representation of those states where anti-immigration sentiment appears to be highest and where Republicans are strongest," said Angelo Falcón, president of the National Institute for Latino Policy. "This means that we can expect a much more complicated political situation on the issue of immigration and general Latino issues."

With Republican legislatures controlling redistricting in many of the states with surging immigrant populations, the GOP could have an opportunity to draw many of the new districts to its own partisan benefit. (In Arizona, though, an independent redistricting commission will redraw the district lines.) The Civil Rights Act of 1964 may forestall the worst attempts at race-based gerrymandering: Arizona and Texas are among the states required to "preclear" new district boundaries with the Department of Justice. The entire state of Arizona was required to submit to preclearance in 1975, thanks to a long history of discrimination against Spanish-speaking and Native American residents, including an English-language literacy test. DOJ has objected to four statewide redistricting plans since 1982, though objections plummeted under the Bush administration. This time around, any attempts at gerrymandering will have to pass muster with Attorney General Eric Holder.

November’s GOP sweep rewrote the country’s political balance of power. But December’s census data shows that the new conventional wisdom might require a second look. After all, anti-immigrant politics may fire up today’s Republican base -- but they also alienate Latino voters and voters-to-be. In this sense, the 2010 census count may benefit Republicans in the short-term, even as it points to trouble down the road.