Daley is a reflection, not a cause

Why would progressives be surprised by the political empowerment of a top JP Morgan official? 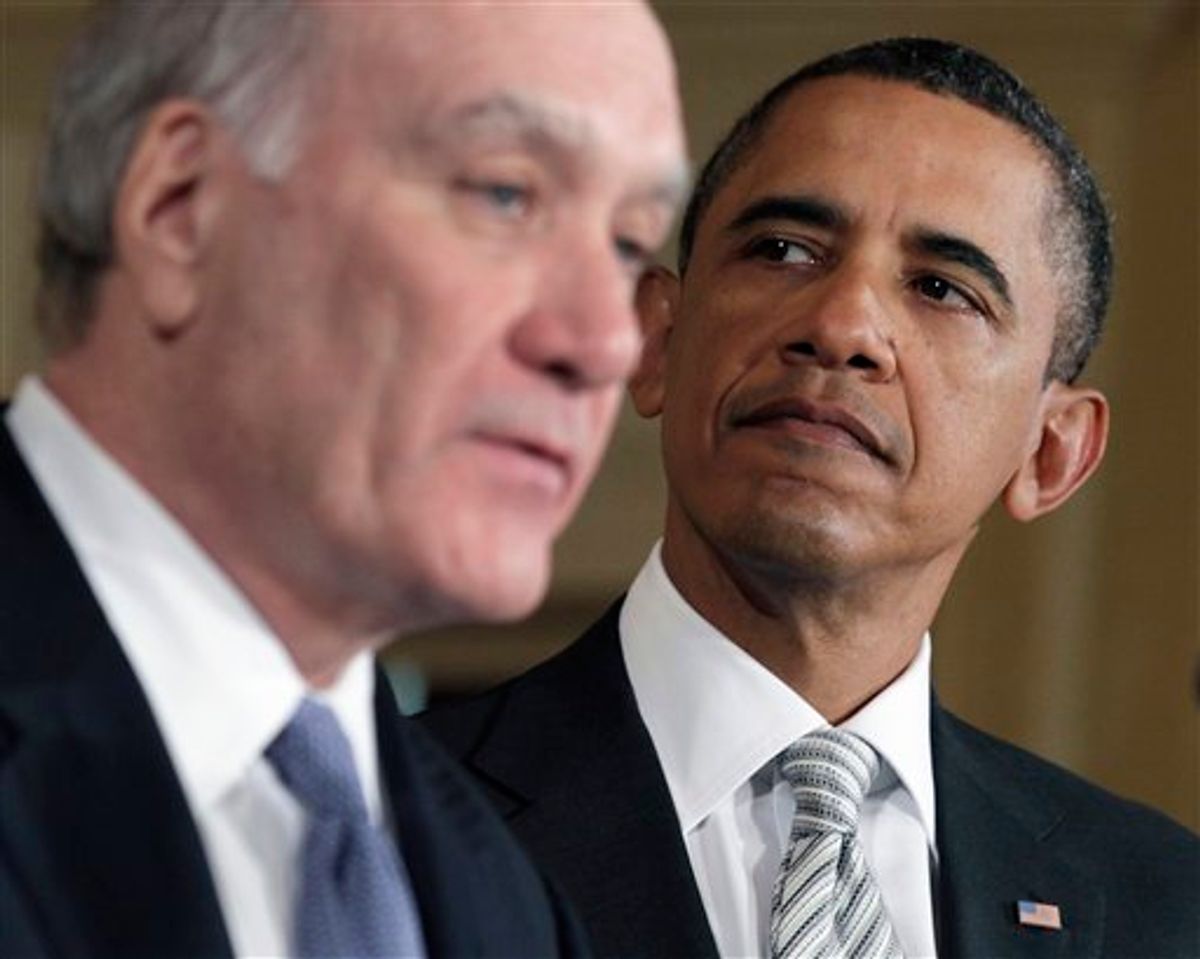 Few things interest me less at this point than royal court personnel changes.  I actually agree with the pro-Obama/Democratic-Party-loyal commentators who insist it doesn't much matter who becomes White House Chief of Staff because it's Obama who drives administration policy.  Obama didn't do what he did in the first two years because Rahm Emanuel was his Chief of Staff.  That view has the causation reversed:  he chose Emanuel for that position because that's who Obama is.  Similarly, installing JP Morgan's Midwest Chairman, a Boeing director, and a long-time corporatist -- Bill Daley -- as a powerful underling replacing Emanuel isn't going to substantively change anything Obama does.  It's just another reflection of the Obama presidency, its priorities and concerns, and its overarching allegiances.

There's a section of my forthcoming book about the rule of law which examines the direct causal line between the vast number of Wall Street officials in key administration positions and the full-scale exemption from accountability which financial elites enjoy even for the most egregious lawbreaking.  When you compile all of those appointments in one place, the absolute stranglehold large-scale corporate interests exert over virtually all realms of government policy is quite striking.  But it's nothing more than what the economist Nouriel Roubini meant when he told the makers of the 2010 documentary "Inside Job" that Wall Street has "captured the political system" on "the Democratic and the Republican side" alike, or what Simon Johnson describes as "The Quiet Coup":  "The government seems helpless, or unwilling, to act against" elite business interests.

Shipping in a JP Morgan executive to be White House Chief of Staff isn't a cause of any of this; it's just a nice symbol for what our political culture is, more than ever in the Era of Change.  It's the other side of the revolving door that sent Peter Orszag to his multi-million-dollar a year reward at Citigroup for his 18 months in an administration which lavished that bank will all sorts of gifts.  Getting exercised about Bill Daley's empowerment is like going to the beach and being angry that it's full of sand:  this appointment is the inevitable by-product of the essence of Washington and of the Obama presidency.  It's what they do and who they are.  As Matt Stoller suggested, the most surprising thing about the Daley pick is that he has no Goldman Sachs experience.

But I do find the angry reaction from some progressives to be somewhat perplexing (even though I agree with the substance of their critique and am glad they're voicing it).  On one level -- the most superficial one -- the Daley appointment seems very strange.  Think about this: leading progressive voices -- including MoveOn and, in a very hard-hitting segment last night, Rachel Maddow (video below) -- have vociferously condemned the Daley choice.  By contrast, the most enthusiastic reactions came from JP Morgan Chairman Jamie Dimon (who first suggested Daley), the Chamber of Commerce, the Third Way, and Karl Rove.  Beyond that, Daley was an outspoken opponent -- in public -- of two of Obama's most prominent legislative items:  health care reform and the financial regulation bill's consumer protection agency.  Why, angry progressives seem to be asking, would Obama ignore the views of his so-called "progressive base" while seeking to please those who are his political adversaries?

But it's perfectly rational for Obama to do exactly that.  There's a fundamental distinction between progressives and groups that wield actual power in Washington:  namely, the latter are willing (by definition) to use their resources and energies to punish politicians who do not accommodate their views, while the former unconditionally support the Democratic Party and their leaders no matter what they do.  The groups which Obama cares about pleasing -- Wall Street, corporate interests, conservative Democrats, the establishment media, independent voters -- all have one thing in common:  they will support only those politicians who advance their agenda, but will vigorously oppose those who do not.  Similarly, the GOP began caring about the Tea Party only once that movement proved it will bring down GOP incumbents even if it means losing a few elections to Democrats.

That is exactly what progressives will never do.  They do the opposite; they proudly announce:  we'll probably be angry a lot, and we'll be over here doing a lot complaining, but don't worry:  no matter what, when you need us to stay in power (or to acquire it), we're going to be there to give you our full and cheering support.  That is the message conveyed over and over again by progressives, no more so than when much of the House Progressive Caucus vowed that they would never, ever support a health care bill that had no robust public option, only to turn around at the end and abandon that vow by dutifully voting for Obama's public-option-free health care bill.  That's just a microcosm of what happens in the more general sense:  progressives constantly object when their values and priorities are trampled upon, only to make clear that they will not only vote for, but work hard on behalf of and give their money to, the Democratic Party when election time comes around.

I'm not arguing here with that decision.  Progressives who do this will tell you that this unconditional Party support is necessary and justifiable because no matter how bad Democrats are, the GOP is worse.  That's a different debate.  The point here is that -- whether justified or not -- telling politicians that you will do everything possible to work for their re-election no matter how much they scorn you, ignore your political priorities, and trample on your political values is a guaranteed ticket to irrelevance and impotence.  Any self-interested, rational politician -- meaning one motivated by a desire to maintain power rather than by ideology or principle -- will ignore those who behave this way every time and instead care only about those whose support is conditional.  And they're well-advised to do exactly that.

It is probably the case that a lack of enthusiasm on the part of the Democratic base contributed to the Democrats' defeat in the 2010 midterm election.  But what Obama cares about is getting re-elected in 2012, and he knows full well that come March or April of that year -- if not earlier -- most of the progressives who are now continuously complaining about him will be at the front of the line waving their Obama banners, pulling out their checkbooks and whipping into line anyone who is not similarly supportive.  By contrast, corporate institutions and Wall Street tycoons will pour their money into Obama's defeat if he does not show them the proper level of deference and accommodate their policy demands, but will support him (as they did in 2008) if he pleases them.  Resource disparities between those factions are significant, but it's also due in part to their own choices that Wall Street is empowered, and progressives are irrelevant.

If someone wants to lend unconditional support to Obama and the Democrats, there's a cogent (if not persuasive) rationale to justify it.  But what I find baffling is that those who make that choice -- and who make clear that this is their choice -- then express surprise, anger and scorn in situations like the Daley appointment when the White House so blatantly ignores what they want.  Given the posture of progressives, why would the White House possibly do anything other than ignore them (except when they're deliberately attacking them in order to appear more centrist)?  What motive does the White House have for doing anything other than that?  None that I can see.