When eating organic was totally uncool

Before hipsters got rooftop gardens, my poor, refugee family ate that way because we had to. And we were ashamed 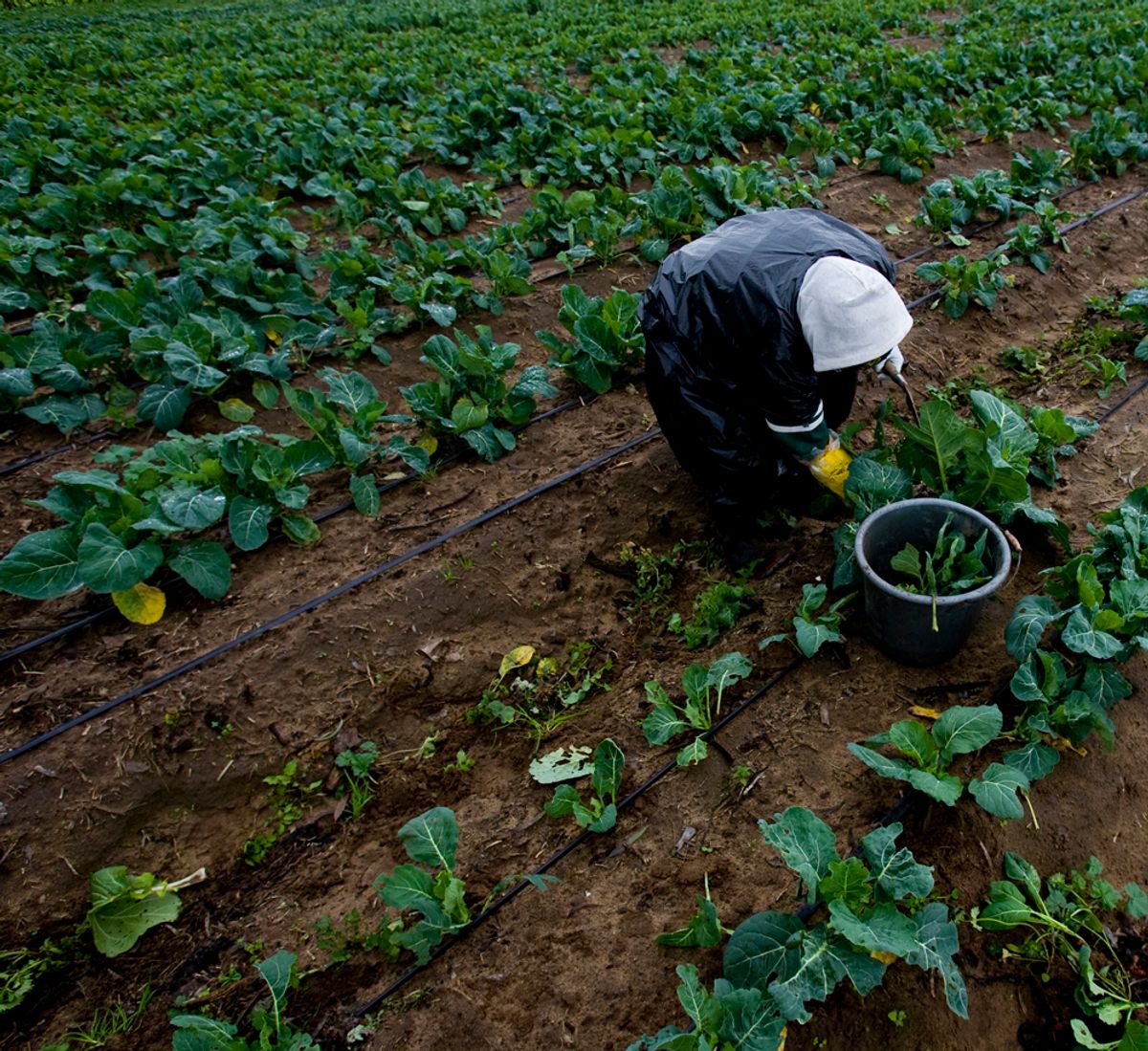 To me, the organic food movement has become dizzyingly, surreally chic. Farmers have become rock stars; the most exclusive restaurants name-check them so much you can almost see dirt on the menu. But before organic produce exploded into a $25 billion industry, before city gardening became cool, I grew up in a Hmong refugee community, living the urban organic lifestyle not because it was fashionable, but because we were poor. I couldn't wait to leave it behind.

I grew up in Del Paso Heights, a mixed-race inner city of Sacramento, Calif. -- the kind of neighborhood that had just two grocery stores between endless fast-food and liquor shops, and where we all paid for our groceries with food stamps. It was where we grew organic food and raised chickens in our backyards to survive. And where we did it in secrecy.

Like most Hmong in the United States, our community was from Laos, transplanted here after an alliance with the CIA turned our isolated tribe of farmers into mercenaries -- a failed secret war against the Communist Vietnamese that left Hmong as the targets of ethnic cleansing. Lifelong farmers-turned-international refugees, the older generation was ill-prepared to thrive in modern America. They settled into inner cities where many turned to social services as safety nets.

I remember watching grown-ups lose their identities and self-worth, slip into depression and cycles of poverty, illness and suicide. These were clan leaders who once commanded the respect of entire villages, tough guerrilla soldiers trained by the CIA -- like my father -- and proud providers who had, without writing, committed to memory centuries of the best farming practices. And they were humbled, receiving welfare and food stamps because there was no opportunity then in urban America for their main skill. Still, they farmed in the city for two necessities: food and a wistful connection to the old way of life.

We grew crops in every plot of soil that hinted of fertility -- parking lots, front lawns, even inside discarded paint buckets, which made terrific homes for lemongrass and chili peppers. When I was in elementary school, the families in our apartment building worked a farm just outside of Sacramento. Every person, every age, had a job. Meals were planned around what we gathered: We scraped fresh cucumbers, serving them with sugar over ice on hot summer days; we pounded the signature Hmong mix of hand-picked peppers, cilantro, green onions and lime in a mortar and served it as a dip for meat and sticky rice. I remember loving our imperfectly shaped cucumbers because I got to watch each one grow into its own unique shape and thought they all had more character than the "beautiful" ones wrapped in plastic at the grocery store. And I loved mustard greens, which grew in abundance once a year but could be pickled for year-round consumption.

We bartered with each other. We raised chickens in the backyard, letting them out to roam and feeding them by hand. We didn't have a label for this back then, though now I suppose people call it "free-range," and it costs more. We slaughtered our own hens, sometimes with rituals honoring the sacrifice of the animal's life.

With the costs of vegetables offset by our gardens, all the families pitched in to buy a pig or cow from the closest farmer, dividing the meat. This way, we could also afford to buy rice.

But we had to keep our locavore tendencies secret. America's food rules, which seemed to us to go against nature, left us fearful of punishment. At the time, exactly one person from our clan had attended an American college and became our cultural broker, translating to shamans the world of Western medicine, and to lifelong hunters and fishermen the rules of hunting and fishing. What license was needed for what, how many of what thing could be caught during which season, if you could take fruit from a tree depending on which side of a fence it hung. All of it was too complicated to keep straight, and so it felt safer to keep our food producing regimens to ourselves. I can't remember how many times my father built, tore down and rebuilt the chicken coop, afraid that neighbors who heard crowing would report us.

"Don't tell the Americans," my mother would always say, and, eventually, as I grew into adolescence, I couldn't agree more. I was afraid of being judged.

My mother sprinkled only fresh-cut grass in her garden, swearing by its ability to grow bigger and tastier vegetables. She often crossed dangerous lanes of traffic to get to a pile of lawn clippings. My sisters and I would jump out of the car to bag the grass, and we did it with the speed of a NASCAR pit crew, terrified of being seen by friends.

The parking lot of our neighborhood Kmart was a regular pickup spot for lawn clippings. In my teens, when merely being accused of shopping at Kmart was an epic embarrassment, you can imagine the horror I felt about being spotted stealing grass from its parking lot. "If anyone sees me, MY LIFE IS OVER!" I'd say. Unfortunately, dramatic teenage declarations of "life being over" didn't fly in Hmong households, not when there would always be someone around to remind you of the time he narrowly escaped the death camps.

As the adolescent me tried to find her groove, navigating deeper into the treacherous social maze of an American high school, I tried to talk my mother out of picking cilantro and scallions from her garden, cleaning and separating and selling them for 50 cents a bunch at a local Hmong store. It never made her more than $20 a week, but she didn't care. She was obsessed with the idea of doing something she knew how to do, something that could earn money.

My family searched for new places to grow food while I became increasingly afraid that outsiders would find out we lived in a replica Hmong village, built to resemble what the older generation knew as "home." Then one day, I was outed by a classmate as a food stamp user as I stood in the collection line to count money for my mother. That was the day that I decided I hated everything about the way we got food -- from the paint-bucket chili peppers to the communal pig, cut up in pieces, ready to be bagged and shared. I wanted to run away from this mess. I wanted to be one of the cool kids. I would feed myself like they do.

Now, as an adult, I don't have a garden. Years after I finished college and was well into the working world, long after credit cards made checks obsolete at the grocery store, I still insisted on writing checks to pay for my brand-name groceries. The defiant child food stamp user in me still needs the validation that comes from putting pen to paper and declaring, in writing, that I earned the right to take this food home.

But who'd know that, just as I finally shed a former life of organic necessity, my mother would be the hip one? Now I go to the market and hear people boasting about the eggs in their backyards, or how much their garden looks like the one on the White House lawn. My best friend, also a former Hmong child gardener, laughs with me about collecting lawn clippings. If only we had had cool recyclable cloth bags with eco-friendly slogans, we joke. If only we could be heroic, claiming to be launching a food revolution. But for us, there was no room to think about glamour. That life just felt backward.

I imagine now how many "I told you so's" my mother would impart on me if she could grasp the enormousness of today's food movement: Pesticide-free produce, hand-fed chickens, cuisines boasting minimal ingredients all represent billions of dollars to be made. And, irony of ironies, now people's food stamps can't even cover the costs of organic and local produce at our markets.

But I stood recently at a popular farmers' market in San Francisco, where I now live and where my relatives have a vegetable stall. Surrounded by a flurry of patrons enthusiastic about locally grown food, I felt ... proud. Proud that Hmong farmers owned their own stalls, their tradition of necessity now trendy and profitable. That day, my uncle gave me a bag of cucumbers and tomatoes from his stall. He said he had heard all about my schooling and my travels, and that he was proud I had made it. But as I looked at my bag and at all the customers flocking to his stall, I couldn’t help thinking he was making it in his own right.