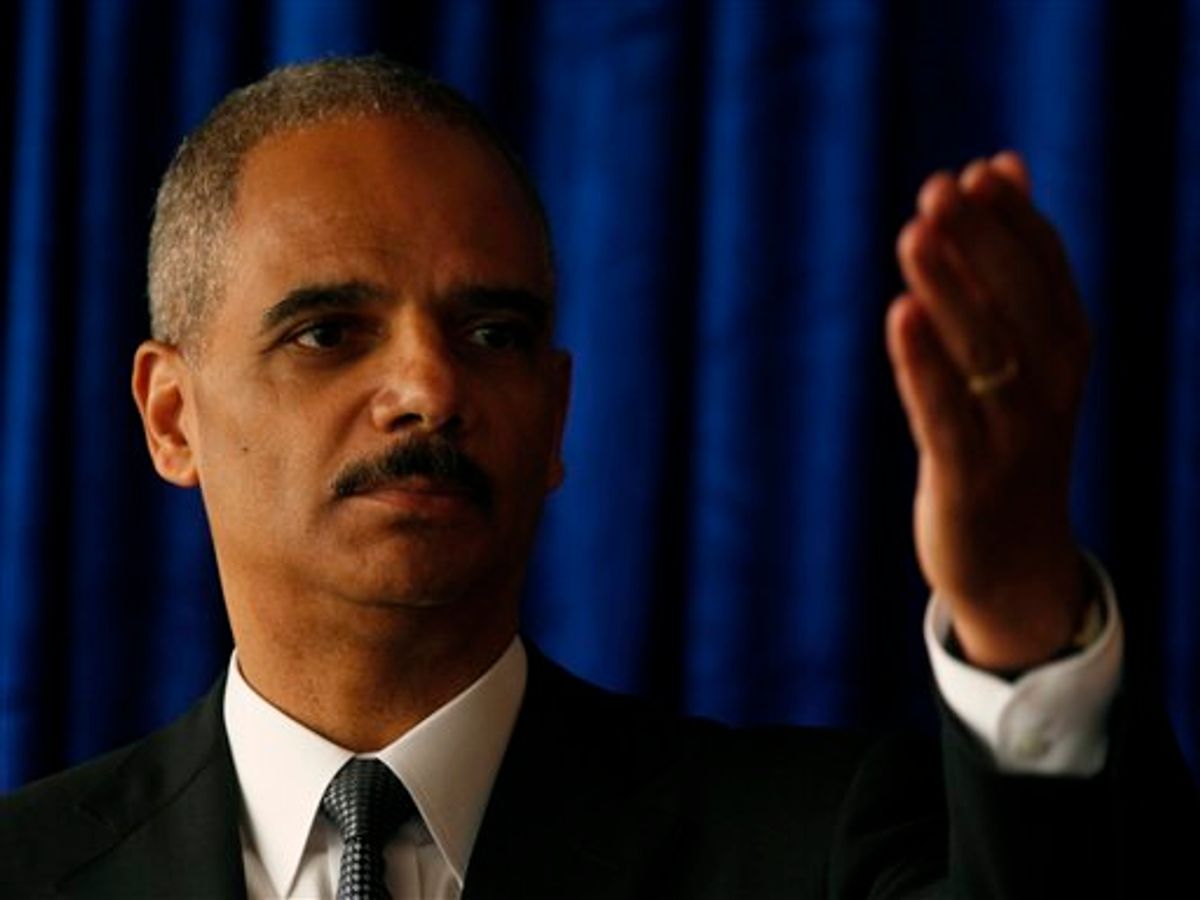 U.S. Attorney General Eric Holder gestures while speaking during a news conference in Hong Kong Tuesday, Oct. 19, 2010. The U.S. Attorney General on Tuesday urged Beijing to release Nobel Peace Prize winner Liu Xiaobo, a day before he was scheduled to meet with top law enforcement officials in mainland China. But Holder said he is unlikely to bring up Liu during his meetings in Beijing, which will focus on piracy and counterfeiting issues. (AP Photo/Kin Cheung) (AP)
--

Last night, Birgitta Jónsdóttir -- a former WikiLeaks volunteer and current member of the Icelandic Parliament -- announced (on Twitter) that she had been notified by Twitter that the DOJ had served a Subpoena demanding information "about all my tweets and more since November 1st 2009."  Several news outlets, including The Guardian, wrote about Jónsdóttir's announcement.

What hasn't been reported is that the Subpoena served on Twitter -- which is actually an Order from a federal court that the DOJ requested -- seeks the same information for numerous other individuals currently or formerly associated with WikiLeaks, including Jacob Appelbaum, Rop Gonggrijp, and Julian Assange.  It also seeks the same information for Bradley Manning and for WikiLeaks' Twitter account.

The information demanded by the DOJ is sweeping in scope.  It includes all mailing addresses and billing information known for the user, all connection records and session times, all IP addresses used to access Twitter, all known email accounts, as well as the "means and source of payment," including banking records and credit cards.  It seeks all of that information for the period beginning November 1, 2009, through the present.  A copy of the Order served on Twitter, obtained exclusively by Salon, is here.

The Order was signed by a federal Magistrate Judge in the Eastern District of Virginia, Theresa Buchanan, and served on Twitter by the DOJ division for that district.  It states that there is "reasonable ground to believe that the records or other information sought are relevant and material to an ongoing criminal investigation," the language required by the relevant statute.  It was issued on December 14 and ordered sealed -- i.e., kept secret from the targets of the Order.  It gave Twitter three days to respond and barred the company from notifying anyone, including the users, of the existence of the Order.  On January 5, the same judge directed that the Order be unsealed at Twitter's request in order to inform the users and give them 10 days to object; had Twitter not so requested, it would have been compelled to turn over this information without the knowledge of its users.  A copy of the unsealing order is here.

Jónsdóttir told me that as "a member of the Foreign Affairs Committee [of Iceland's Parliament] and the NATO parliamentary assembly," she intends to "call for a meeting at the Committee early next week and ask for the ambassador to meet" her to protest the DOJ's subpoena for her records.  The other individuals named in the subpoena were unwilling to publicly comment until speaking with their lawyer.

I'll have much more on the implications of this tomorrow.  Suffice to say, this is a serious escalation of the DOJ's efforts to probe, harass and intimidate anyone having to do with WikiLeaks.  Previously, Appelbaum as well as Bradley Manning supporter David House -- both American citizens -- had their laptops and other electronic equipment seized at the border by Homeland Security agents when attempting to re-enter the U.S.

UPDATE:  Three other points:  first, the three named producers of the "Collateral Murder" video -- depicting and commenting on the U.S. Apache helicopter attack on journalists and civilians in Baghdad -- were Assange, Jónsdóttir, and Gonggrijp (whose name is misspelled in the DOJ's documents).  Since Gonggrijp has had no connection to WikiLeaks for several months and Jónsdóttir's association has diminished substantially over time, it seems clear that they were selected due to their involvement in the release of that film.  Second, the unsealing order does not name either Assange or Manning, which means either that Twitter did not request permission to notify them of the Subpoena or that they did request it but the court denied it (then again, neither "Julian Assange" nor "Bradley Manning" are names of Twitter accounts, and the company has no way of knowing with certainty which accounts are theirs, so perhaps Twitter only sought an unsealing order for actual Twitter accounts named in the Order).  Finally, WikiLeaks and Assange intend to contest this Order.

UPDATE II:  It's worth recalling -- and I hope journalists writing about this story remind themselves -- that all of this extraordinary probing and "criminal" investigating is stemming from WikiLeaks' doing nothing more than publishing classified information showing what the U.S. Government is doing:  something investigative journalists, by definition, do all the time.

And the key question now is this:  did other Internet and social network companies (Google, Facebook, etc.) receive similar Orders and then quietly comply?  It's difficult to imagine why the DOJ would want information only from Twitter; if anything, given the limited information it has about users, Twitter would seem one of the least fruitful avenues to pursue.  But if other companies did receive and quietly comply with these orders, it will be a long time before we know, if we ever do, given the prohibition in these orders on disclosing even its existence to anyone.

UPDATE III:  Iceland's Interior Minister, Ögmundur Jónasson, described the DOJ's efforts to obtain the Twitter information of a member of that country's Parliament as "grave and odd."  While suggesting some criticisms of WikiLeaks, he added:  "if we manage to make government transparent and give all of us some insight into what is happening in countries involved in warfare it can only be for the good."  The DOJ's investigation of a member of Iceland's Parliament -- as part of an effort to intimidate anyone supporting WikiLeaks and to criminalize journalism that exposes what the U.S. Government does -- is one of the most extreme acts yet in the Obama administration's always-escalating war on whistleblowers, and shows how just excessive and paranoid the administration is when it comes to transparency:  all this from a President who ran on a vow to have the "most transparent administration in history" and to "Protect Whistleblowers."