Daniel Hernandez helped save the congresswoman's life -- and yes, his sexuality and ethnicity matter 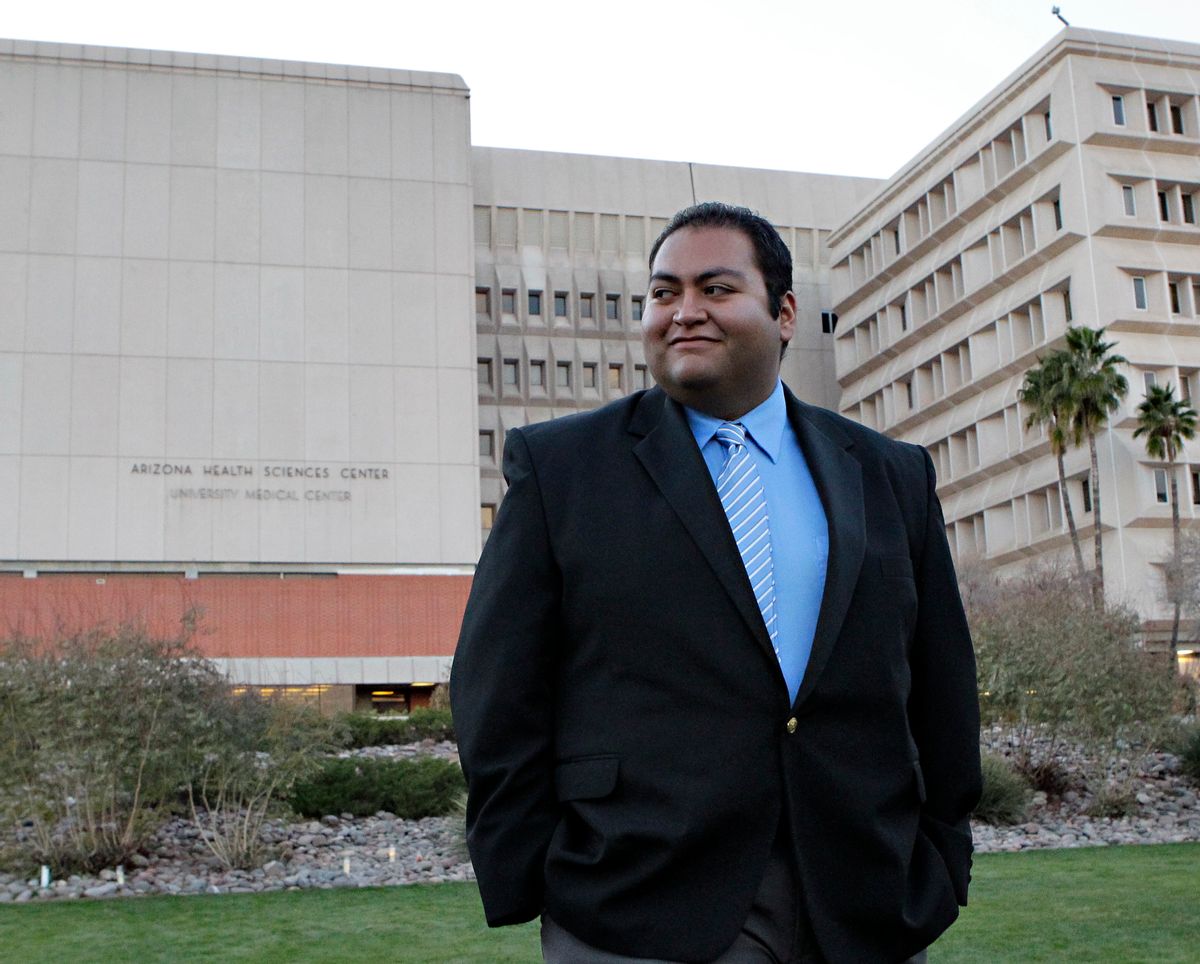 Daniel Hernandez, an intern with U.S. Rep. Gabrielle Giffords, D-Ariz., walks across the lawn outside University Hospital Sunday, Jan. 9, 2011 in Tucson, Ariz. Hernandez attended to Giffords and others immediately after Giffords was shot in the head a day earlier during a speech at a local supermarket. (AP Photo/Matt York) (AP)
--

It didn't take long after 20-year-old political intern Daniel Hernandez emerged as the hero of Saturday's mass shooting in Arizona for the cynics to figure out the angle. As a poster on Free Republic remarked, "Look shortly for the leftist media to push the 'Gay, Hispanic-American Intern saving the Liberal Congresswoman's life from the Tea Party' angle." Well, Freepers, here it is!

It's not quite that simple, of course. However we try to understand the causes of the tragedy in Arizona and the political rhetoric of violence, it seems clear that there's considerably more to the disturbing story of shooting suspect Jared Lee Loughner than can be explained by pointing to a few wry Sarah Palin quips. And if simply being gay and Latino were grounds for heroism, Ricky Martin's face would be on the $10 bill.

Daniel Hernandez is, by any measure, an extraordinary young man. He had been interning in Gabrielle Giffords' office only five days when an event at a local Safeway thrust him into the international spotlight for his quick thinking, bravery and competence in the wake of unimaginable violence. On the "Today" show Monday, Matt Lauer explained how Hernandez drew upon his high school training as a certified nursing assistant to check on the pulses of other shooting victims before noticing the severity of Giffords' wounds and, as he puts it, prioritizing her. He put her upright and held her in his lap as he applied pressure to staunch the blood. "I could tell she had a severe gunshot," he said. "I just tried to do my best until emergency medical services could arrive. My focus was on making sure I was doing everything I could to take care of her." Even when the ambulance arrived, he stayed with her, because "I saw my job then as not taking care of her medical needs but taking care of her emotional needs. I tried to comfort her and make sure she knew she wasn't alone. I let her know I was going to try to contact her parents and her husband."

In the two days since the shooting, Hernandez has emerged in interviews as a graceful presence with a no doubt promising future, with considerably much more going for him than his status as a minority. So why should the sexual orientation of this eminently competent, compassionate person keep coming up in this tale? Why is his ethnicity, and the fact that he grew up speaking Spanish and attending dual language schools, of any consequence?  Hernandez never asked to be the face of a movement. He doesn't represent any one group any more than Jared Lee Loughner is your typical white guy. And that's exactly why it matters.

It matters because guys like Arizona Sen. John McCain, who described the repeal of "don't ask, don't tell" as "a very sad day," still think that orientation has an effect on whether or not a person can ably serve in the military. It matters because the notion that two people of the same sex can love each other and build a life together is still considered in many parts of the country, including Arizona, a threat to what is laughably referred to as "traditional marriage" -- as if heterosexuals have really mopped up the floor with this whole commitment thing. It matters because last week, when Arizona banned a Tucson district's Mexican-American studies program,  state's Attorney General Tom Horne referred to it as "propagandizing and brainwashing." It matters because just last year Arizona enacted a law that would not merely allow but require immigration officials to determine the immigration status of anyone "where reasonable suspicion exists" that the person might be in the country illegally. And "reasonable suspicion," as many civil libertarians pointed out, might just boil down to having a darker shade of skin or speaking Spanish.

That's just Hernandez's home of Arizona. And though Pima County Sheriff Clarence Dupnik scathingly referred to his state as "a mecca for racism and bigotry," violence, racism and bigotry aren't confined to any one ZIP code -- they exist all over this great land of ours.  They exist just as surely as Hernandez shows that kindness and bravery are alive and well in Arizona.

It's still far too easy for a small-minded yahoo to champion discrimination based on orientation and race, and it's just as easy for another small-minded yahoo somewhere else to believe the red states are indeed "meccas of racism and bigotry." If any good can come out of something as unfathomably horrible as Saturday's mass shooting, let it be that it shakes up a few preconceptions. That it shows the world that a hero can be gay or straight, can speak English or Spanish or both, and that stupid laws can exist in places full of good people. And anyone who has any doubt of what kind of person deserves to serve next to him in battle, or stand before their community and declare their love, or go to school, or walk down the street without being asked for paperwork needs to hear that and remember that, again and again until it sinks in. Yes, the "gay Hispanic American" saved a life on Saturday, and yes, it does matter.