The joys and perils of "sustainable" seafood labeling

Why is it so confusing to choose eco-friendly fish? Is it all just marketing baloney? An expert explains 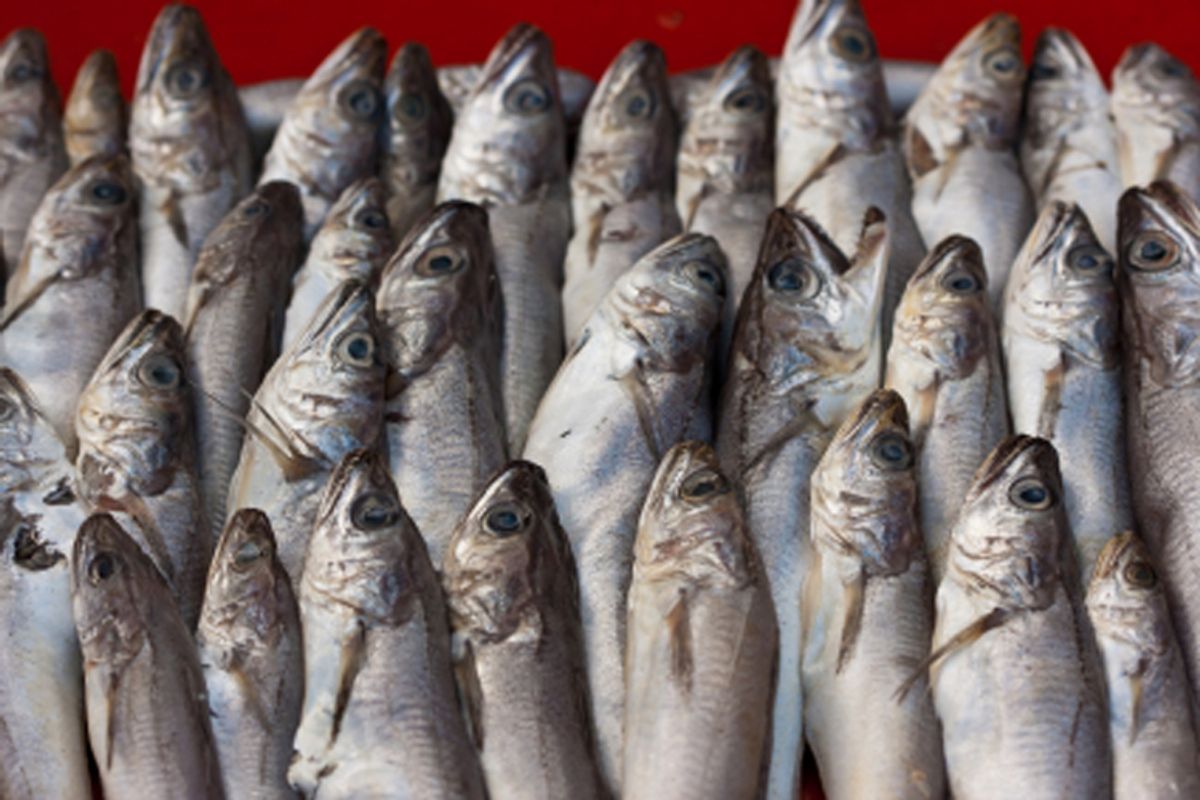 Choosing to eat only, say, sustainable chicken may at times be confusing, but whatever obscurity you run into there has nothing on the dank murk of information when it comes to finding seafood fit to be called "sustainable." The sea is very, very dark, and very, very big, and so all kinds of factors and questions come into play, from place and species to how fish are caught or grown. Let's just say you feel like having salmon tonight. OK, here goes: Lots of Alaskan sockeye salmon is legitimately "sustainable," while much salmon from California to Washington is flirting with extinction. And lest we start thinking, "Well, how about Atlantic salmon?" you might want to know that Atlantic salmon is always farmed, and salmon farming is almost universally regarded by environmentalists as a major pollutant. So what can a well-meaning consumer do?

Say hello to London-based Marine Stewardship Council, the world's biggest certifier of sustainable seafood. Founded in 1997 as a partnership between food giant Unilever and the World Wildlife Fund and hailed as a groundbreaking partnership between industry and conservationists, it was quickly embraced by sustainability advocates, and it has certified more than 5,000 products. Intrepid James Beard Foundation Award-winning food politics reporter Barry Estabrook referred to it as the "gold standard" of sustainable seafood watchdogs, but, apparently, nothing gold can stay. As the demand for sustainable fish, meat, food, car tires, neckties, everything has grown, the market is suddenly flooded with products that use "sustainability" as a marketing buzzword and little more. And as the MSC is celebrating the awarding of its certification to its 100th fishery, Estabrook and others are growing uneasy with some of MSC's certifications. A spokesman from Greenpeace recently commented to the Guardian that MSC consumers are "being duped."

To get some clarity on the MSC and the larger question of what seafood sustainability is all about, we e-mailed with Paul Greenberg, a great lover of fishing and the eating of fish, a love that presumably led him to write the critically acclaimed "Four Fish: The Future of the Last Wild Food," a grim but complex and at times hopeful investigation of what our insatiable hunger for seafood is doing to the seas. We talked about why there is so much conflicting information in sustainable seafood, the inherent contradiction of saving fish so that we can eat them, and living in the Boneless Era.

The MSC is under fire for certifying fisheries that some advocates say are in danger, or are too scientifically unclear to be rubber-stamped as being "sustainable." Is the problem just a matter of scale or ideological purity? A MSC spokesman admitted to the Guardian that "for some of our critics, the MSC test of sustainability is not high enough," but was still insistent that its work has been successful.

My personal opinion is that very, very large [and controversial -- Ed.] fisheries like Alaska pollock and New Zealand hoki have a hard time meeting the sustainability test because of the shear biomass removed from the ecosystem. Can any ecosystem tolerate the removal of 2-3 billions pounds of biomass year in and year out? Is the fundamental problem industrial fishing itself? Maybe. Maybe no degree of certification will ever bring that kind of removal into line with what the oceans can tolerate.

The other problem is a classic fox-in-the-henhouse dilemma that dogs all fisheries management. Most people really just don't care very much about fisheries, except for fishermen, that is. And it's fishermen or fishing company managers that have the incentive and the focus to keep both feet in a management or certification process over the long haul. Let's face it, the details of fisheries management and certification are complex and often, well, dull. Nonprofits come and go. Activists come and go and can lose their enthusiasm. But fishermen depend on the fish being scrutinized for their living.

What kind of effect has certification really had, on markets and on fisheries?

The amount of fish on the market that has any kind of certification is still tiny. So the effect that MSC has had to date is more kind of symbolic. It's the introduction of the idea that there should be a sustainability standard at all.

In that sense, MSC is a good thing in that it is a large-ish, reasonably sound institution whose very existence argues that certification and sustainability are not just passing fads but rather things that will eventually become industry standard.

As for my own opinion, I'd tend to side with one scientist I spoke with once who argued that if we tore down MSC we'd probably end up building a whole new institution to replace it that would look exactly like it. So, it should probably exist. But, alongside it, better regulations of the oceans need to be put in place. Consumer choice alone won't get us to a sustainable ocean. We need more marine protected areas, better international institutional control over highly migratory fish like tuna and greater protection for things like forage fish that a lot of the fish we eat depend on for their sustenance. We also need to come up with a realistic idea of total biomass that can be removed from the ocean in aggregate before we start parsing subsets of that aggregate.

In addition to MSC, there are other organizations that try to certify or recommend particular fish to buy or to avoid to consumers. But why is there so often conflicting information coming from these sources?

Oftentimes it has to do with the geographic distance of the nonprofit in question from the fisheries it is adjudicating. An example: The other day I was looking up to see how Atlantic fluke (aka summer flounder) ranked. Monterey Bay Aquarium gives it a "red" -- avoid. But Blue Ocean Institute gives it a green. I attribute this mostly to the fact that Blue Ocean Institute is on the East Coast and is literally a stone's throw from where fluke can be found. They know that fluke are rebuilding well, that there is good management in place and that we are making progress. Monterey Bay, meanwhile, is on the West Coast and their ruling for fluke is a blanket ruling for all East Coast flatfish. Broadly speaking, they are right. There are a lot of problems with East Coast flatfish in general. But because Monterey Bay adjudicates over so many species, they may not have the time to parse all flatfish, species by species. Nevertheless the two organizations do speak to one another and I think there is an honest effort to weed out contradictions.

What makes calling a fishery "sustainable" complex and complicated? Is the "buy this fish, don't buy that one" model hampered or inherently flawed?

My feeling is that the "choose the right fish" approach is an excellent way to teach consumers about the different aspects of fishing and aquaculture and that does have a multiplier effect over time. But as an economic lever for change it doesn't really have that much effect. That's mostly because fisheries are an international business. We import 80 percent of our seafood, so which lever are we throwing exactly when we choose Ecuador-grown tilapia over Chinese? If we don't buy that Chinese tilapia the Chinese will gladly sell it elsewhere. The only exception to this would be in persuading really large buyers to change their ways. I know this is something Greenpeace has been trying to do.

What is the biggest problem in seafood sustainability, to your mind?

Well, one big one is that when we speak of wild fish, if you say that a certain fish is sustainable then everyone will eat it and then it won't be sustainable anymore. It will be in our stomachs.

And all that said, are there sources that can be generally trusted? Can a casually concerned consumer make generally good choices, or are there no easy answers at all?

There are bests and worsts, certainly. With aquaculture fish, I'm encouraged by Arctic char because it is containment-grown, has low fish-in-fish-out requirements and also tastes good. To my knowledge there is no "bad" char on the market right now. I feel similarly about American farm-raised catfish. Again, containment grown, native species, provides wetlands for migrating birds. But, and there's always a but, thanks to the catfish farmers we now have Asian carp swimming up the Mississippi to the Great Lakes.

As far as wild fish, the old chestnut of smaller is better seems to make sense. Anchovies, sardines and the like. But sometimes the enthusiasm for sardines can feel a bit over the top. When you go to Monterey you have to fight off all the smirking waiters telling you about local sardines. And there are people I know who just will never fight through all those bones.

During my book tour I said a number of times that when they go back through our middens 2,000 years from now, archaeologists will likely call our time "the Boneless Era" because of our tendency to spurn little boney animals and eat giant megafauna in huge, boneless portions. But I'm also reminded how my 16-year-old daughter -- who joined me on my tour and heard me say that line a million times -- finished up the summer. When the tour was all done we went to dinner and she ordered a big steak. Before tucking in she smiled and said, "I quite like the boneless era."