Loughner's dad pursued him before shooting

Sheriff's investigators say Randy Loughner chased Jared, who had a mysterious black bag, into desert in his truck 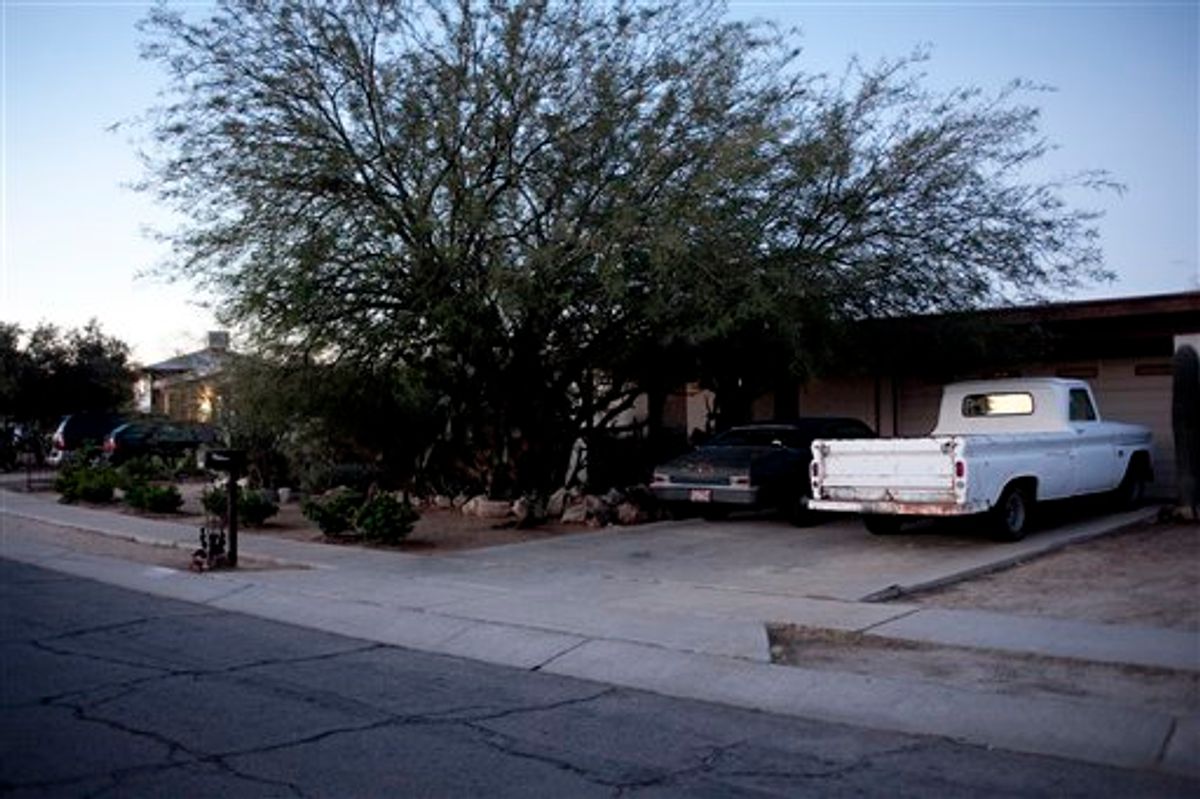 The home of Jared Loughner, at 7741 N Soledad Ave., Sunday, Jan. 9, 2011 in Tucson, Az. Loughner is accused of attempting to assassinate Rep. Gabrielle Giffords and killing six other people Saturday, Jan. 8, 2011 during a "Congress on your Corner" event at a mall in Tucson, Az. (AP Photo/The Arizona Republic, Mark Henle) (AP)
--

Mysterious black bag in hand, Jared Loughner ran into the desert from his angry father, who was driving a truck on a futile pursuit.

Hours after Randy Loughner's confrontation with his 22-year-old son Saturday morning, six people were shot dead and more than a dozen others wounded -- and Jared Loughner was in custody.

The sheriff's deputies who swarmed the Loughners' house removed what they describe as evidence Jared Loughner was targeting Rep. Gabrielle Giffords, who doctors said Tuesday was breathing on her own for the first time after taking a bullet to the forehead. Among the handwritten notes was one with the words "Die, bitch," which authorities told The Associated Press they believe was a reference to Giffords.

Investigators with the Pima County Sheriff's Department previously said they found handwritten notes in Loughner's safe reading "I planned ahead," "My assassination" and "Giffords." Capt. Chris Nanos said all the writings were either in an envelope or on a form letter Giffords' office sent him in 2007 after he signed in at one of her "Congress on Your Corner" events -- the same kind of gathering where the massacre occurred.

On the morning of the shooting, a mumbling Jared Loughner fled after his father asked him why he was removing a black bag from the trunk of a family car, said Nanos and Rick Kastigar, chief of the department's investigations bureau. Investigators are still searching for the bag.

Meanwhile, this city held a tribute to victims the eve of a presidential visit.

On Tuesday night, several hundred mourners filled a Tucson church for a public Mass to remember the slain and pray for the injured. As people filed in, nine young girls sang "Amazing Grace." The youngest victim of the attack, 9-year-old Christina Taylor Green, was a member of that choir.

"I know she is singing with us tonight," said Tucson Bishop Gerald Kicanas, who presided over the service.

President Barack Obama visits Arizona Wednesday and will honor the victims in a speech to a rattled state and nation.

In one apparent reaction to the shooting, the FBI said background checks for handgun sales jumped in Arizona following the shootings, though the agency cautioned that the number of checks doesn't equate to the number of handguns sold.

Loughner's parents, silent and holed up in their home since the shooting spree, issued a statement Tuesday, expressing remorse over the shooting.

"There are no words that can possibly express how we feel," Randy and Amy Loughner wrote in a statement handed to reporters waiting outside their house. "We wish that there were, so we could make you feel better. We don't understand why this happened.

"We care very deeply about the victims and their families. We are so very sorry for their loss."

Sheriff's deputies had been to the Loughner home at least once before the attack, spokesman Jason Ogan said. He didn't know why or when the visit occurred, and said department lawyers were reviewing the paperwork and expected to release it Wednesday.

The visits were for nonviolent incidents, including a report by Jared Loughner of identity theft, a noise complaint and Amy Loughner's claim that someone had stolen her license plate sticker, according to a report by The Wall Street Journal.

In addition to the new details about the hours before the shooting, interviews with those who knew Loughner or his family painted a picture of a young loner who tried to fit in.

Before everything fell apart, he went through the motions as many young men do nowadays: Living at home with his parents, working low-wage jobs at big brand stores and volunteering time doing things he liked.

None of it worked. His relationship with his parents was strained. He clashed with co-workers and police. And he couldn't follow the rules at an animal shelter where he spent some time.

One close high school friend who requested anonymity to avoid the publicity surrounding the case said he would wait outside 10 minutes for Jared to leave the house when they were going out. When Jared would get into the car, he'd say that it took so long because his parents were hassling him.

The parents of another close friend recalled how Loughner's parents showed up at their doorstep in 2008 looking for their son, who had left home about a week before and broken off contact.

While the friend, Zach Osler, didn't want to talk with the AP, his parents Roxanne and George Osler IV did.

With the Loughners at their house, Zach Osler told them the name of the place where their only child was staying, Zach's father said.

Loughner was arrested in October 2008 on a vandalism charge near Tucson after admitting he scrawled the letters "C" and "X" on a road sign in a reference to what he said was Christianity. His address listed on the police report was an apartment near his home.

Loughner eventually moved back in with his parents.

Even when Loughner tried to do good, it didn't work out.

A year ago, he volunteered walking dogs at the county animal shelter, said Kim Janes, manager of the Pima Animal Care Center. He liked dogs; neighbors remember him as the kid they would see walking his own.

But at the shelter, staff became concerned: He was allowing dogs to play in an area that was being disinfected after one had contracted a potentially deadly disease, the parvovirus.

"He didn't think the disease was that threatening and when we tried to explain how dangerous some of the diseases are, he didn't get it," Janes said.

Loughner wouldn't agree to keep dogs from the restricted area, and was asked to come back when he would. He never returned.

Loughner also jumped from paid job to job because he couldn't get along with co-workers, according to the close high school friend who requested anonymity. Employers included a Quiznos sandwich shop and Banana Republic, the friend said.

On his application at the animal shelter, he listed customer service work at Eddie Bauer.

Loughner grew up on an unremarkable Tucson block of low-slung homes with palm trees and cactus gardens out front. Fittingly, it's called Soledad Avenue -- Spanish for solitude.

Solitude found Loughner, even when he tried to escape it. He had buddies but always fell out of touch, typically severing the friendship with a text message. Zach Osler was one such friend.

Loughner's father moved into the house as a bachelor, and eventually got married, longtime next-door neighbor George Gayan said. Property records show Randy Loughner has lived there since 1977.

Gayan said he and Randy Loughner had "differences of opinion but nothing where it was radical or violent." He declined to provide specifics. "As time went on, they indicated they wanted privacy," Gayan said.

Randy Loughner apparently has not worked for years -- at least outside his home.

Amy Loughner got a job with the county parks and recreation department just before Jared was born, and since at least 2002 has been the supervisor for Roy P. Drachman Agua Caliente Park on the outskirts of the city. She earns $25.70 an hour, according to Gwyn Hatcher, Pima County's human resources director.

Linda McKinley, 62, has lived down the street from the Loughner family for decades and said the parents could not be nicer -- but that she had misgivings about Jared as he got older.

"As a parent, my heart aches for them," she said.

She added that when she was outside watering her plants she would see Jared riding down the street on his bike, often talking to himself or yelling out randomly to no one.

McKinley recalled that once he yelled to some children on the street: "I'm coming to get you!"