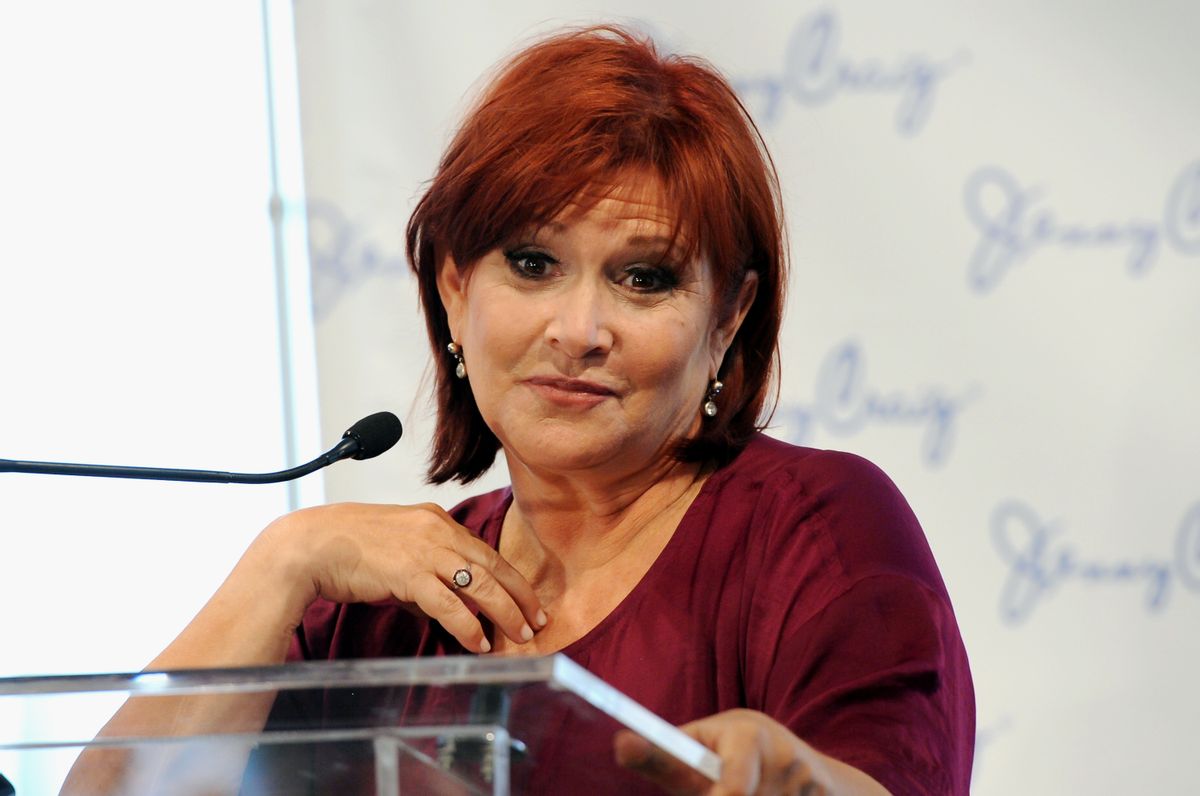 In Hollywood, it's perfectly acceptable to be a bipolar recovering addict who believes her house is haunted by the Republican who overdosed in it. In fact, if you're Carrie Fisher, that's pretty much your job description. The 54-year-old actress and author has in recent years skillfully turned the darkest struggles and most painful chapters of her life into incisive, witty commentary, including the bestselling memoir and subsequent hit one-woman show, "Wishful Drinking." But while all the world may adore a tanked-up Alderaan princess, it still does not want a beefed-up one. This week, Fisher announced she has become the new face -- and butt -- of Jenny Craig.

Why the sudden -- and incredibly public -- effort to slim down? As Fisher said at her press conference Wednesday, "I Googled myself recently without a lubricant and I came across a posting that someone made about me which was, 'What ever happened to Carrie Fisher? She used to be so hot, now she looks like Elton John.' Yeah, that hurt." Chalk up another victory for the haters on the Internet.

It's been a long time since the "Star Wars" glory days, to be sure. Generations of sci-fi geeks still credit the sight of her in a gold bikini as a defining moment in America's collective puberty. Now, at 180 pounds, the 5-foot-1 actress is inarguably overweight. Or, as she puts, it, "I'm fat. All the clothes in my closet belong to another chick. They have to make a new alphabet for my bra size." That Fisher, who says she's already shed 12 pounds on the diet and exercise plan, would want to take positive steps for her health and self-esteem is laudable. And with obesity rates and associated health problems of Type 2 diabetes and heart disease skyrocketing, for a woman who's both an icon and a funny, down-to-earth real gal to be open about her own path to better health is surely encouraging for others looking to make changes in their own lives. For Fisher to lend her considerable humor and writing talent to Jenny Craig (which has in the past made use of another self-deprecating wit -- if not stellar dieter -- Kirstie Alley) certainly makes the process far more real to most potential dieters than Holly Madison complaining that she was told to lose weight for a Las Vegas burlesque revue.

But none of us are the people we were even a few years ago. We can do a bang-up job of staying healthy and we may be the lucky ones with youthful genes, but things are still going to loosen and sag and spread out. Fisher knows that, joking, "I swear when I was shooting those films I never realized I was signing an invisible contract to stay looking the exact same way for the rest of my existence."

But it seems just plain awful that part of anyone's motivation to make a lifestyle change would be the opinions of trolls on the Internet, the kind who gleefully suggest a woman has now morphed into Jabba the Hut. Why the sense of contrition, the walk of shame? This week, while Fisher was admitting that "I'm pretty fearless, but my scale is frightening," Seth Rogen was complaining of his training for "The Green Hornet" and boasting, "Now that the movie's over I hope to get fat again. Because I enjoy it."  Try to get your brain around imagining a high-profile woman saying that. Ever.

For the ever candid Fisher to be so frank as she embarks on what she calls a new way of interacting with food could be the start of something healthy and good -- even if Jenny Craig's plan isn't, for many people, exactly a slam dunk success. But when she writes that "people are seeing me as this fat woman ... not as someone who's written books or who did this show and got through all these crazy obstacles I've gotten thru," it seems the problem isn't Carrie Fisher's. Because if you look at a woman and can't see her grace and wit and strength because you're too busy snarking on her weight, maybe it's not her body that needs fixing. It's your mind.