"A Somewhat Gentle Man": Hilarious darkness from the frozen north

Pick of the Week: Norway's "A Somewhat Gentle Man" includes some of the funniest sex scenes in movie history 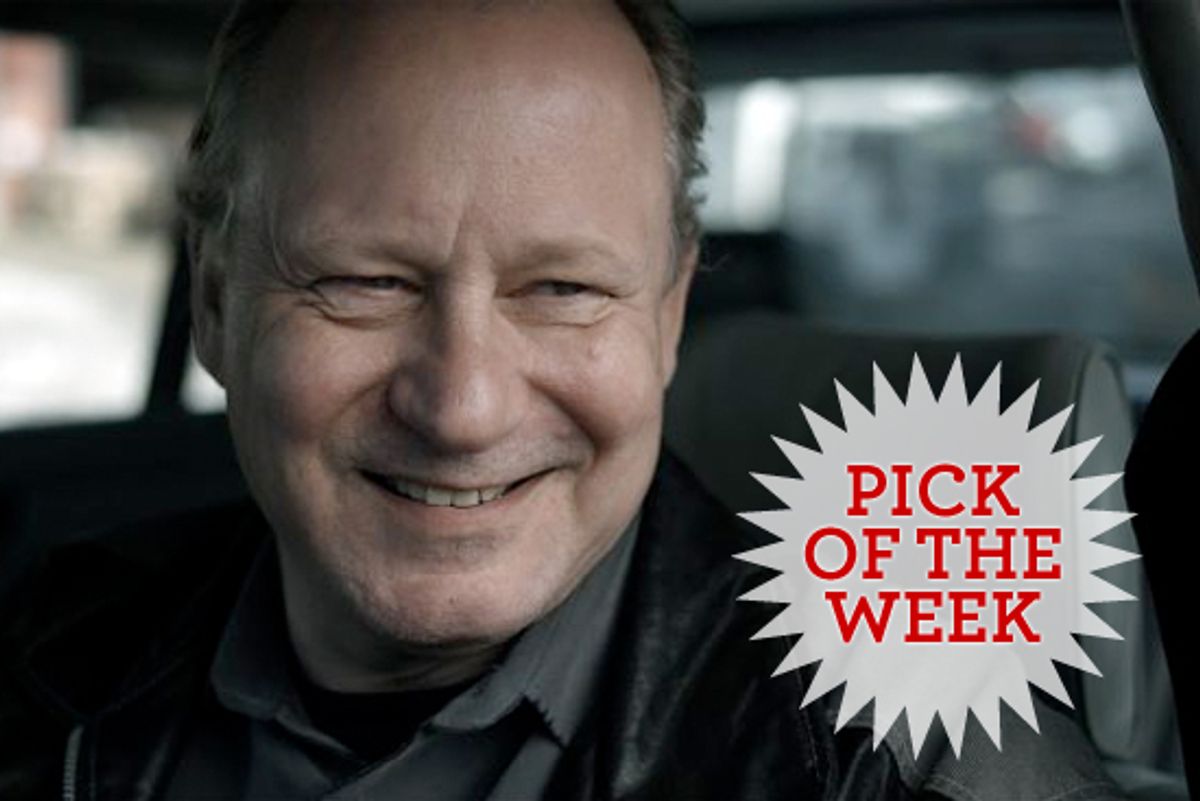 When Ulrik, a ponytailed, weatherbeaten Norwegian convict played by Stellan Skarsgård, is about to be released from the prison that's been his home for the last 12 years, a guard rushes up to him at the last minute with a bottle of something good and a few words of wisdom. "When you leave this place, keep going forward," the guard tells him. "Don't look back." Then the gate slides open, and Ulrik looks out at freedom: the flat, white, unrelieved winter landscape of Norway. We don't know anything about his life in prison, but was it really as bad as all that?

That's just the first of numerous sight gags in Hans Petter Moland's film "A Somewhat Gentle Man," which I truly and honestly believe is one of the funniest movies I've seen in years. If you suspect that says more about me than about the film, you might be right. I'm exactly the sort of evil bastard who finds disproportionate delight in a Scandinavian black comedy that suggests both the Coen brothers' "Fargo" and the grim fables of Finnish minimalist Aki Kaurismäki. Still, maybe you're the kind of person who grooves to the dark humor of the northlands yourself, and I'm more than happy to defend "A Somewhat Gentle Man" as a pitch-perfect blend of darkness and sweetness, built around a masterful performance by a great actor.

If you don't recognize Skarsgård's name, you'll definitely recognize his face; he's one of those European actors who's a superstar in his home country (which is actually Sweden, not Norway) but has made a terrific living playing villainous and/or comic roles in Hollywood. Maybe you've seen him on "Entourage," or in "Mamma Mia!" or as Bootstrap Bill in the "Pirates of the Caribbean" franchise. He's been a regular in Lars von Trier's films, played Matt Damon's professor in "Good Will Hunting" and played both anti-Nazi hero Raoul Wallenberg and Nazi sympathizer Wilhelm Furtwängler (not in the same film). I won't pretend to have seen even half his film roles, which encompass at least five languages and six countries, but if the brooding, baffled Ulrik isn't his best performance it's definitely up there.

Moland is more like a director of commercial films than art-house obscurities, at least by Norwegian standards, and while "A Somewhat Gentle Man" has the look and feel of downscale, kitchen-sink realism, it's a lot warmer and nuttier than it seems at first. (Moland has directed Skarsgård twice before, in the thrillers "Zero Kelvin" and "Aberdeen.") We know almost nothing about Ulrik or his life as he takes his first steps into freedom, except that he has an ex-wife and an adult son who both claim they want nothing to do with him (although their actions suggest otherwise). He owes some kind of debt -- financial or moral or tribal -- to a paunchy mob boss named Jensen (Bjørn Floberg), who presides over a dismal suburban diner and bosses around a moronic flunky named Rolf (Gard B. Eidsvold), but whose imperial power seems seriously diminished.

Ulrik apparently exudes some serious prison-house pheromones, because womenfolk can't keep their mitts off him. Not his seriously scary landlady (Jorunn Kjellsby, in what may be the greatest of several scene-stealing deadpan performances) -- who makes a delicious fish pudding and expects payment for it, if you know what I mean and I think you do -- not his bitter ex-wife (Kjersti Holman) and not Merete (Jannike Kruse), the blond German girlfriend of his boss who serves as this movie's low-budget femme fatale. "A Somewhat Gentle Man" contains several of the most hilarious sex scenes ever committed to film, and through it all Ulrik is simultaneously wide-eyed and stone-faced. (He seems to enjoy eating while in flagrante delicto.) Somehow Skarsgård manages to convey the fact that this man, raised in a culture that devalues emotion and then hardened by crime, is going through an internal transformation he can neither understand nor express.

Ulrik's droll odyssey through downwardly mobile suburban Oslo also involves a foulmouthed Lappish arms dealer (with a smartass dwarf underling), a Norwegian salsa cover band and our eventual realization that his past misdeeds -- and present-day debt to Jensen -- are much worse than we thought. Still, this is the kind of movie where things are always darkest before the dawn, and a chance meeting with his son's hostile but very pregnant girlfriend (Julia Bache-Wiig) offers Ulrik a totally unexpected chance for redemption.

Everything about "A Somewhat Gentle Man" is so subdued and precise, from Philip Øgaard's cinematography to the brilliant score by Danish composer Halfdan E (constructed around half-buried bits of rock, pop and country hits) to the performance by Skarsgård that tells us nothing but shows us everything to the easily misremembered title (this isn't "A Serious Man" or "A Single Man" or "A Man for All Seasons"), that I don't really expect American audiences to cotton onto how rich and funny it is. Still, Moland and screenwriter Kim Fupz Aakeson's ruthless treatment of their country's frozen landscape and repressed people can only be rooted in love, and by the end of the film that prison guard's advice (along with his bottle of aquavit) definitely comes in handy.

"A Somewhat Gentle Man" opens Jan. 14 at the IFC Center in New York and Jan. 28 at the Nuart Theatre in Los Angeles, with other cities to follow.