Will Congress act to curb the shocking abuses U.S. citizens encounter when re-entering their own country? 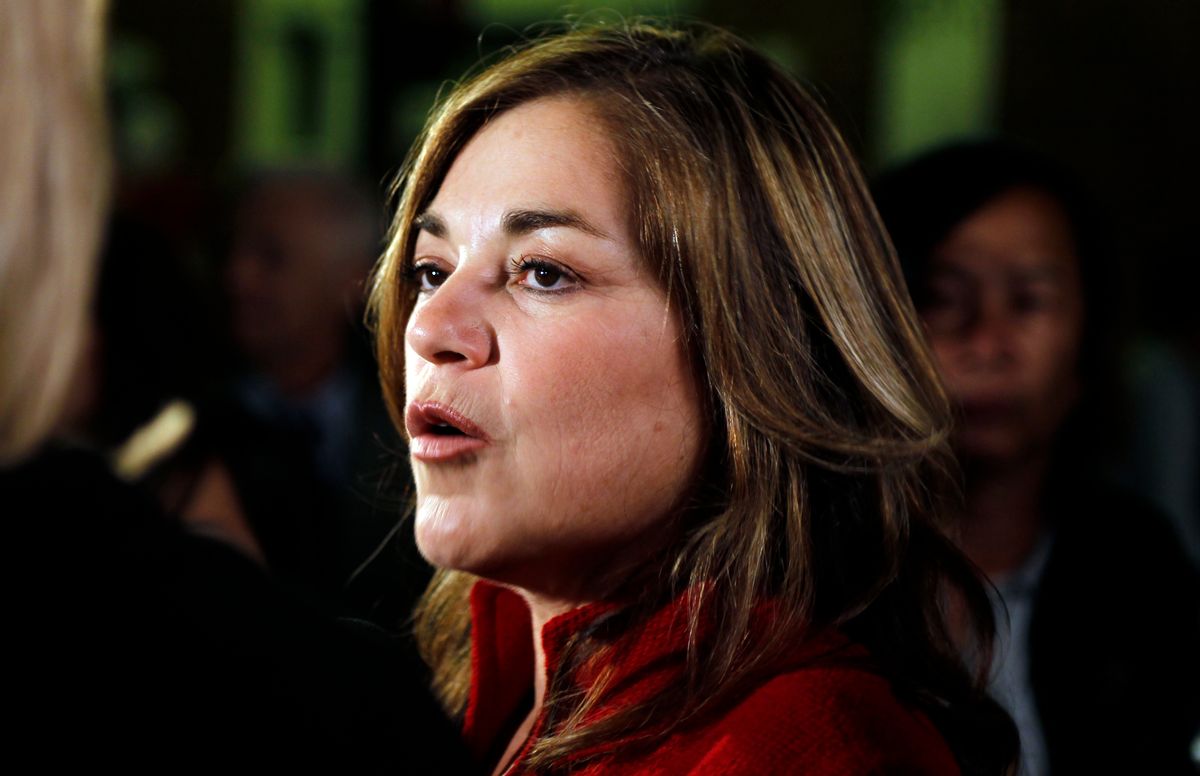 For those who regularly write and read about civil liberties abuses, it's sometimes easy to lose perspective of just how extreme and outrageous certain erosions are.  One becomes inured to them, and even severe incursions start to seem ordinary.  Such was the case, at least for me, with Homeland Security's practice of detaining American citizens upon their re-entry into the country, and as part of that detention, literally seizing their electronic products -- laptops, cellphones, Blackberries and the like -- copying and storing the data, and keeping that property for months on end, sometimes never returning it.  Worse, all of this is done not only without a warrant, probable cause or any oversight, but even without reasonable suspicion that the person is involved in any crime.  It's completely standard-less, arbitrary, and unconstrained.  There's no law authorizing this power nor any judicial or Congressional body overseeing or regulating what DHS is doing.  And the citizens to whom this is done have no recourse -- not even to have their property returned to them.

When you really think about it, it's simply inconceivable that the U.S. Government gets away with doing this.  Seizing someone's laptop, digging through it, recording it all, storing the data somewhere, and then distributing it to various agencies is about the most invasive, privacy-destroying measure imaginable.  A laptop and its equivalents reveal whom you talk to, what you say, what you read, what you write, what you view, what you think, and virtually everything else about your life.  It can -- and often does -- contain not only the most private and intimate information about you, but also information which the government is legally barred from accessing (attorney/client or clergy/penitent communications, private medical and psychiatric information and the like).  But these border seizures result in all of that being limitlessly invaded.  This is infinitely more invasive than the TSA patdowns that caused so much controversy just two months ago.  What kind of society allows government agents -- without any cause -- to seize all of that whenever they want, without limits on whom they can do this to, what they access, how they can use it:  even without anyone knowing what they're doing?

This Homeland Security conduct has finally received some long-overdue attention over the past several months as a result of people associated with WikiLeaks or Bradley Manning being subjected to it.  In July, Jacob Appelbaum, a WikiLeaks volunteer, was detained for hours at Newark Airport, had his laptop and cellphones seized (the cellphones still have not been returned), and was told that the same thing would happen to him every time he tried to re-enter the country; last week, it indeed occurred again when he arrived in Seattle after a trip to Iceland, only this time he was afraid to travel with a laptop or cellphone and they were thus unable to seize them (they did seize his memory sticks, onto which he had saved a copy of the Bill of Rights).  The same thing happened to 23-year-old American David House after he visited Bradley Manning in the Quantico brig and worked for Manning's legal defense fund:  in November, House returned to the U.S. from a vacation in Mexico with his girlfriend and her family, was detained, and had his laptop and memory sticks seized (they were returned only after he retained the ACLU of Massachusetts to demand their return).

But this is happening to far more than people associated with WikiLeaks.  As a result of writing about this, I've spoken with several writers, filmmakers, and activists who are critics of the government and who have been subjected to similar seizures -- some every time they re-enter the country.  In September, the ACLU filed a lawsuit challenging the constitutionality of these suspicionless searches; one of the plaintiffs on whose behalf they sued is Pascal Abidor, a 26-year-old dual French-American citizen who had his laptop seized at the border when returning to the U.S. last year:

Abidor was traveling from Montreal to New York on an Amtrak train in May when he had his laptop searched and confiscated by Custom and Border Patrol officers. Abidor, an Islamic Studies Ph.D. student, was questioned, handcuffed, taken off the train and kept in a holding cell for several hours before being released without charge. When his laptop was returned 11 days later, there was evidence that many of his personal files, including research, photos and chats with his girlfriend, had been searched.

A FOIA request from the ACLU revealed that in the 18-month period beginning October 1, 2008, more than 6,600 people -- roughly half of whom are American citizens -- were subjected to electronic device searches at the border by DHS, all without a search warrant.  But the willingness of courts to act is unclear at best.  The judiciary, with a few exceptions, has been shamelessly deferential in the post-9/11 era to even the most egregious assertions of Executive Branch power in the name of security.  Combine that with the stunning ignorance of technology on the part of many judges -- many of whom have been on the bench a long time and are insulated by their office from everyday life -- and it's not hard to envision these practices being endorsed.  Indeed, two appellate courts have thus far held -- reversing the rulings of lower courts -- that Homeland Security agents do not even need to show "reasonable suspicion" to search and seize a citizens' electronic products when re-entering their country.  Some lower court judges, however, continue to rule the practice unconstitutional:  see here for one federal judge's emphatic rejection of the Obama DOJ's arguments as to why such searches fall outside of the Bill of Rights.

In a July, 2008 Senate hearing, then-Sen. Russ Feingold hosted the Association of Corporate Travel Executives, which vehemently opposes this practice, and Feingold said this:

Over the last two years, reports have surfaced that customs agents have been asking U.S. citizens to turn over their cell phones or give them the passwords to their laptops. The travelers have been given a choice between complying with the request or being kept out of their own country. They have been forced to wait for hours while customs agents reviewed and sometimes copied the contents of the electronic devices. In some cases, the laptops or cell phones were confiscated and returned weeks or even months later, with no explanation.

Back then, this was painted as yet another Bush/Cheney assault on civil liberties, so one frequently heard denunciations like this from leading Democrats such as Sen. Pat Leahy:  "It may surprise many Americans that their basic constitutional rights do not exist at our ports of entry even to protect private information contained on a computer. It concerns me, and I believe that actions taken under the cover of these decisions have the potential to turn the Constitution on its head."  But now that this practice has continued -- and seemingly expanded -- under the Obama presidency, few in Congress seem to care.

Indeed, even in the wake of increasing complaints, Congress has done nothing to curb these abuses or even regulate them.  But at least one member of the House, Rep. Loretta Sanchez, a California Democrat, is attempting to do something.  Rep. Sanchez has introduced a very modest bill -- H.R. 216 -- requiring Homeland Security to issue rules governing these searches and seizures so that they are no longer able to operate completely in the dark and without standards.  The bill would also impose some reporting requirements on DHS (Section 4); provide some very modest rights to those subjected to these seizures as well as some minor procedural limits on DHS agents (Sec. 2); and would compel "a civil liberties impact assessment of the rule, as prepared by the Officer for Civil Rights and Civil Liberties of the Department of Homeland Security" (Sec. 2(b)(9)).

Yesterday, I spoke with Rep. Sanchez about her bill, and the 8-minute interview can be heard on the player below.  I actually anticipated this interview would be somewhat confrontational because I think this bill -- though well-intentioned -- is woefully inadequate and potentially even counter-productive.  The bill does not in any way curb the central abuse:  Homeland Security's seizure of people's property without any probable cause or even reasonable suspicion (a bill introduced by then-Sen. Feingold would have barred all such searches in the absence of reasonable suspicion).  Rep. Sanchez's bill also leaves it up to DHS to promulgate its own rules rather than having Congress fulfill its oversight duties by imposing rules on the agency.  And worst of all, the bill could be seen as codifying -- granting the Congressional stamp of approval and thus strengthening -- Homeland Security's power to conduct these suspicionless seizures.

But the more I listened to her, the more I thought that perhaps this is a good first step -- at least arguably better than nothing (I'm still ambivalent on that question).  At the very least, this bill would force into the sunlight information about what DHS is actually doing, perhaps generating some controversy and enabling more stringent restrictions.  It would provide some formal mechanism for citizens to complain about abuse and try to have their laptops returned (though, as computer expert Jacob Appelbaum told me, he would never trust a laptop hard drive that had been in the custody of government agents, as it could easily be fixed, without detection, to surveil all future use).  And it would impose at least some guidelines against invading attorney/client communications, medical information, and other sensitive data (though without any enforcement mechanism, it'd be less like a requirement and more like a suggestion that would likely be ignored).

One point Rep. Sanchez emphasized is that even if she wanted a stronger bill (and it seems clear she does), the chance of enacting it in the GOP House is very small.  After all, the Democratic Congress did nothing about this problem.  But that underscores one amazing point:  the right-wing of the Republican Party and its "Tea Party" faction endlessly tout their devotion to limited federal government powers, individual rights, property rights, and the Constitution.  If they were even minimally genuine in those claims, few things would offend and anger them more than federal agents singling out and detaining whichever citizens they want, and then taking their property, digging through and recording their most personal and private data -- all without any oversight or probable cause.  Yet with very few exceptions (a few groups on the Right, including religious conservatives, opposed some excesses of the Patriot Act, while the small libertarian faction of the GOP oppose many of these abuses), they seem indifferent to, even supportive of, the very policies that most violently injure their ostensible principles.

My interview with Rep. Sanchez: