Wal-Mart teams up with Michelle Obama on nutrition

The retail mega-giant will enforce new standards on the food in its stores. Experts weigh in on what this means 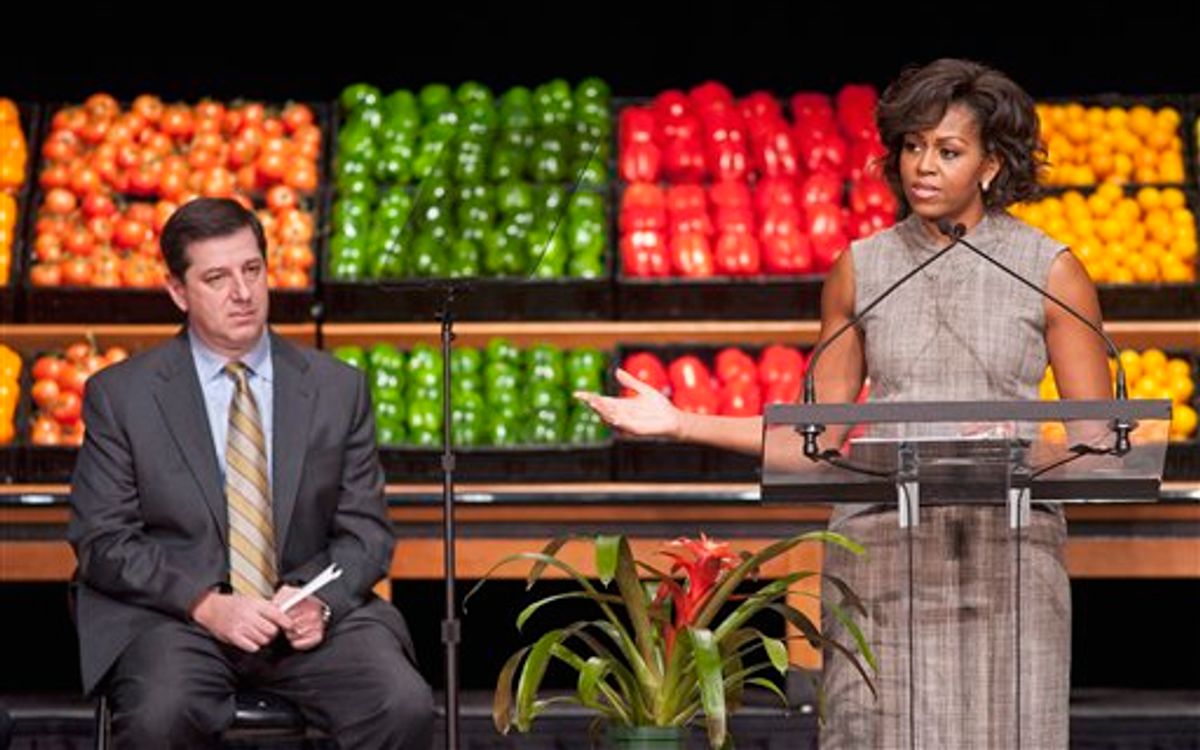 Yesterday, Wal-Mart executives joined Michelle Obama to announce an ambitious healthy food initiative at a community center in southeast Washington, D.C. Over the next five years, the retail giant will enforce new standards of nutrition in its stores -- a mission very much in line with the first lady's commitment to eradicating childhood obesity. Wal-Mart will also build new stores with grocery departments in so-called food deserts, poor urban areas with little access to affordable fresh fruits and vegetables.

The new standards dictate that by 2016, Wal-Mart will reduce the sodium content and sugar content as well as completely eradicate transfat in food sold in its stores. All the while, Wal-Mart promises to keep the food cheap. Wal-Mart's executive vice president of corporate affairs, Leslie Dach, told the New York Times, "We’ve always said that we don’t think the Wal-Mart shopper should have to choose between a product that is healthier for them and what they can afford."

This isn't the first time Wal-Mart has made an investment in good food. Last October, the company pledged to invest $1 billion in buying produce grown on small, local farms and to train 1 million farmers in sustainable agriculture. In a story on Salon, Michelle Loayza hinted at an inevitable suspicion toward Wal-Mart's real intentions:

Great! But wait ... a billion dollars, a million farms: That comes out to $1,000 per farm. And so we started to wonder if there was really much good to be had from this policy.

We wondered if folks would be equally suspicious about Wal-Mart's latest would-be social enterprise project. So we turned to Food Safety News reporter Helena Bottemiller who covered the story on Twitter. Here's an edited version of her (great) feed in chronological order:

Thu 20 Jan 09:30
"Wal-Mart is in a position almost like the [#FDA]. I think it really pushes the #food industry in the right direct." -Jacobson/CSPI

Thu 20 Jan 10:22
If #localfood is often cheaper because you don't have to ship it then why does @Walmart not have more of it? #simpleeconomics

Thu 20 Jan 10:28 (reply)
@tomphilpott right, that's my point. Small-scale farms wont ever have the scale @Walmart demands... so there's an overhead in sourcing.]

And this afternoon, Helena tweeted out her full write-up:

Tom's piece on grist is also worth a read as is this Melanie Warner criticism on bnet with the strongly worded title, "Why the Walmart-Michelle Obama Plan for Healthy Eating is Doomed."

Well, what do you think? Is Wal-Mart's new strategy a sincere effort to help Americans eat healthy? Or just another scheme by a profit-hungry company? Let us know in the comments.