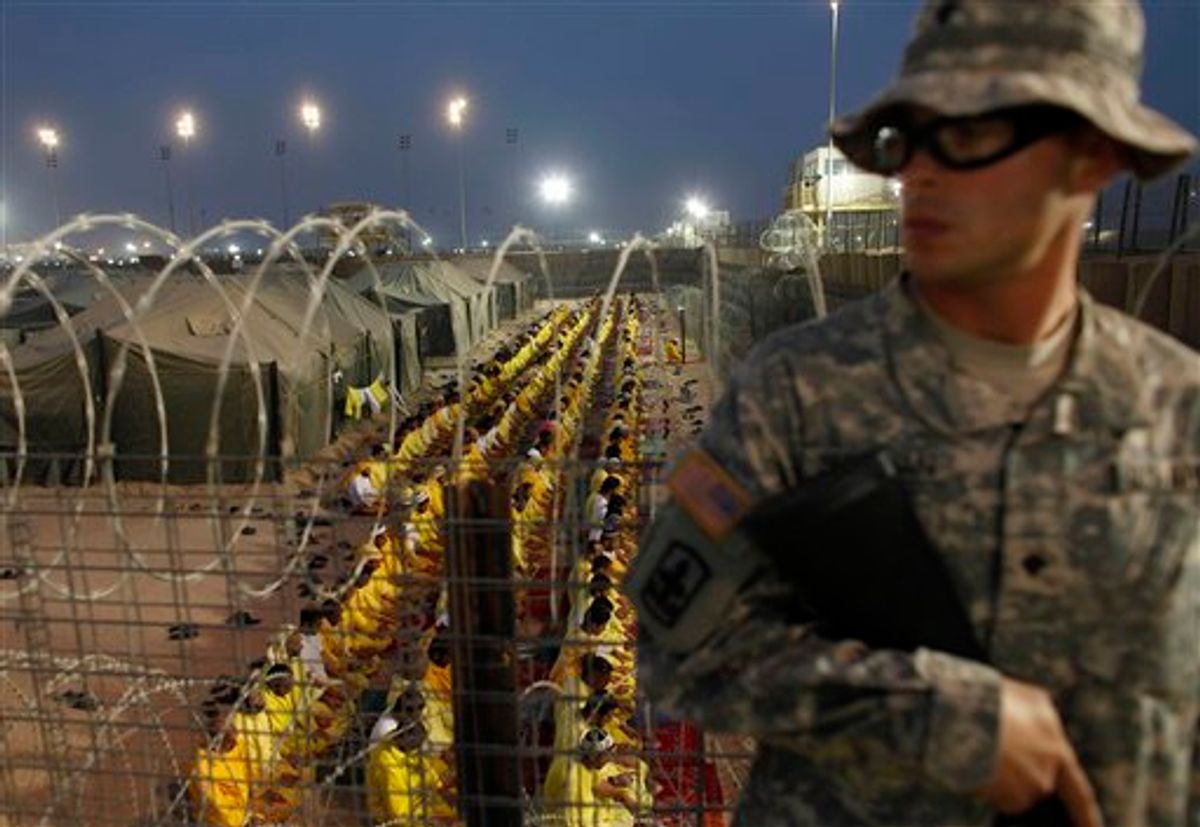 Amnesty International has written a letter to Defense Secretary Robert Gates objecting to the conditions of Bradley Manning's detention, which was first reported here.  The group denounces the oppressive conditions under which Manning is being held as "unnecessarily harsh and punitive," and further states they "appear to breach the USA’s obligations under international standards and treaties, including Article 10 of the International Covenant on Civil and Political Rights."  The letter describes Manning's treatment as particularly egregious "in view of the fact that he has no history of violence or disciplinary infractions and that he is a pre-trial detainee not yet convicted of any offence." Moreover:

The harsh conditions imposed on PFC Manning also undermine the principle of the presumption of innocence, which should be taken into account in the treatment of any person under arrest or awaiting trial. We are concerned that the effects of isolation and prolonged cellular confinement . . . may, further, undermine his ability to assist in his defence and thus his right to a fair trial.

The letter follows a report from Manning's lawyer, former Lt. Col. David Coombs, that the conditions of his detention temporarily worsened in the past week, prompting a formal complaint under the Uniform Code of Military Justice.  Amnesty's letter also follows a report that the U.N.'s leading official on torture is formally investigating the conditions of Manning's detention, a fact confirmed two weeks ago by The New York Times  ("the United Nations’ special rapporteur on torture, Juan E. Mendez, [] said he had submitted a formal inquiry about the soldier’s treatment to the State Department").

Of course, caring what Amnesty International or the U.N. have to say about the conditions of America's detainees is so very 2004.  Now, such a concern is -- to borrow a phrase from Alberto Gonzales -- a quaint and obsolete relic of the past.

Relatedly, the ACLU has obtained new documents which shed more harsh light on the 190 War on Terror detainees who died in American custody.  Specifically, many of these documents -- autopsy reports and military investigations - - show that at least 25 to 30 of those cases were "unjustified homicides," i.e., murder.  It's long been known that many detainees were killed by their treatment during interrogation.  I wrote about many of these cases here over a year ago, and Gen. Barry McCaffrey has said:  "We tortured people unmercifully.  We probably murdered dozens of them during the course of that, both the armed forces and the C.I.A."  But these new documents show that these deaths at the hands of U.S. captors were even more deliberate, brutal and widespread than previously known:

In one such case, a detainee was killed by an unnamed sergeant who walked into a room where the detainee was lying wounded "and assaulted him ... then shot him twice thus killing him," one of the investigating documents says. The sergeant than instructed the other soldiers present to lie about the incident. Later, the document says an unnamed corporal then shot the deceased detainee in the head after finding his corpse.

Appropriately, The Weekly Standard today has an interview with former Bush Attorney General Michael Mukasey in which he slams Eric Holder for the mere possibility that some of these detainee deaths will be criminally investigated, calling it a "witch hunt."  That view is not an aberration, of course.  The Brookings Institutions' Benjamin Wittes last week criticized the Obama DOJ for merely leaving open the possibility of prosecution for some of these CIA interrogators who were so sadistic and lawless that they even exceeded the boundaries of the torture permission slips given to them by the Bush DOJ.  Both Mukasey and Wittes are speaking for the consensus of America's political class.  They -- and it -- literally believe that anyone acting as part of the American government should be able to get away with murder -- which they'll argue in between sermons on the evils of other nations' human rights abuses and the need for the U.S. to "do more" to stop such abuses.

UPDATE:  As they have done several times before, Jane Hamsher today drove David House to visit Bradley Manning at the Quantico brig -- this time, as they announced ahead of time, House intended to deliver to brig officials a petition relating to Manning's detention conditions which has been signed by 42,000 people (only House is on the approved visitors list, so Hamsher typically drops him off, waits at a base McDonald's nearby [as she's been instructed to do], and then picks House up once his visit is done).  Today, they went to the brig and House attempted to enter, the same way as always, but, as of 1:45 2:15 pm EST, both of them have been detained for 45 minutes 1 hour and 20 minutes, and told that they are not permitted to leave or else they will be arrested.  They have now been told -- without explanation -- that they are not permitted to enter, and Hamsher's car is being towed off the brig's property and impounded.  Here is House's live Twitter feed sent during this episode (start at the bottom and read up): 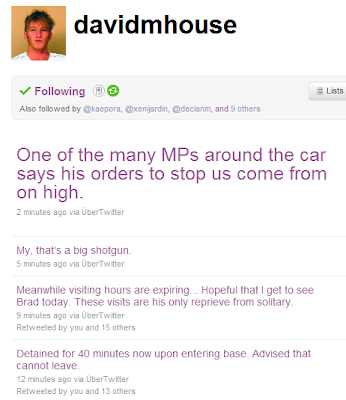 And from Hamsher (read from bottom, up): 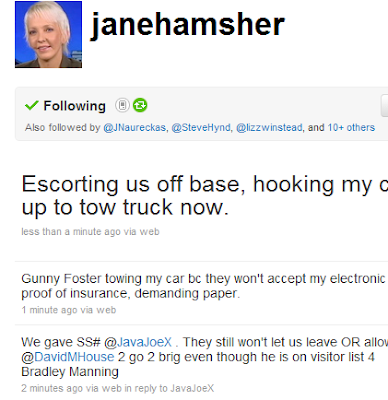 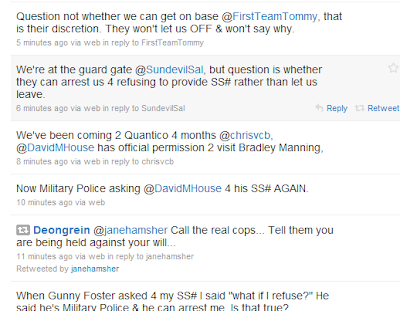 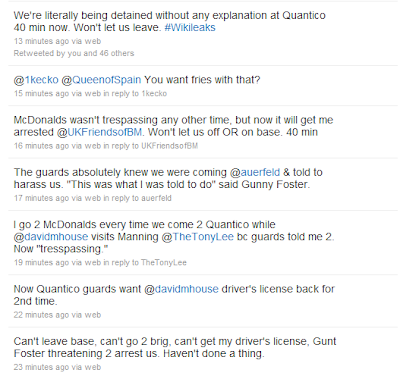 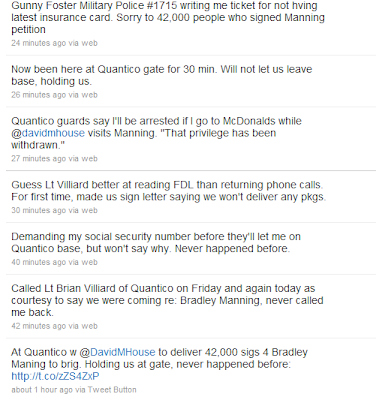 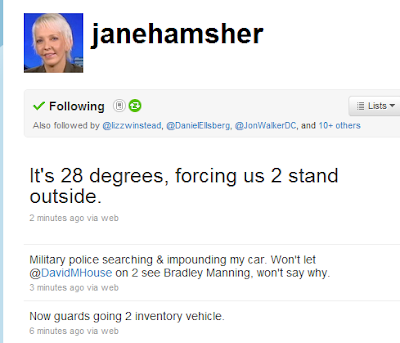 The claim is that Hamsher has only electronic rather than printed proof of car insurance -- the same proof she's had every other time she brought House there, though without a petition -- and they have thus impounded her car.  They also, though, are refusing -- without any explanation -- to let House visit Manning despite his being on the approved visitor list.  So much for Manning's once-a-week reprieve from solitary confinement.

UPDATE III:  The real purpose of this Quantico episode seems clearly to be to deny Manning his only real visitor, thus making his already hellish solitary confinement that much more unbearable, in turn increasing the likelihood that it will crack him and thus induce the anti-WikiLeaks testimony from him that they need.  But it's also critical to note that the last time House went to visit Manning was in December, and afterward, he went on MSNBC to describe the deterioration of Manning's physical and mental condition; now he's been banned, at least for today, from seeing Manning again: