The Egyptian president's abdication promise does little to quell the protests 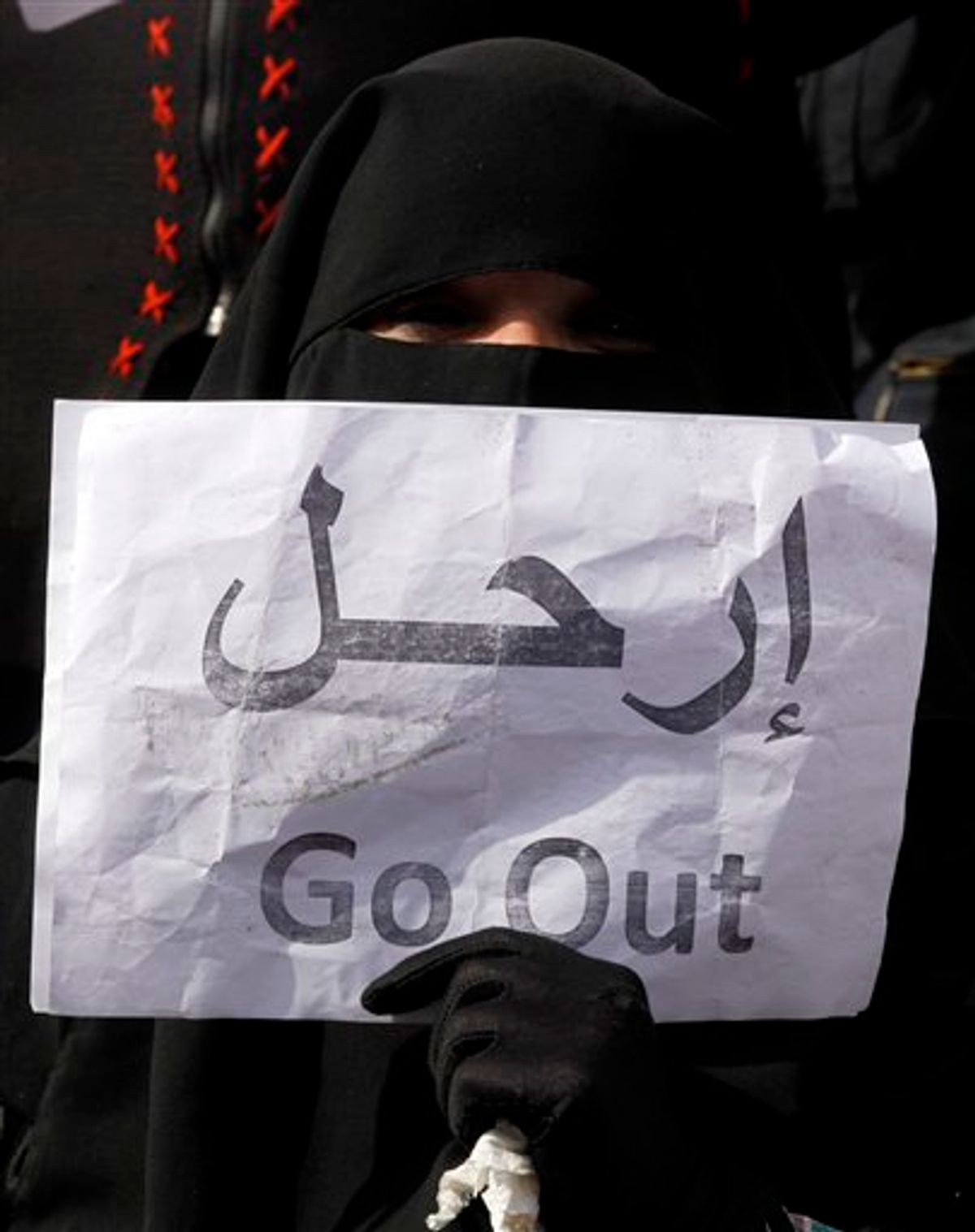 A veiled woman holds a poster calling for President Hosni Mubarak to go, in Tahrir, or Liberation, Square in Cairo, Egypt, Tuesday, Feb. 1, 2011. Tens of thousands of people flooded into the heart of Cairo Tuesday, filling the city's main square as a call for a million protesters was answered by the largest demonstration in a week of unceasing demands for President Hosni Mubarak to leave after nearly 30 years in power. (AP Photo/Victoria Hazou) (AP)
--

President Hosni Mubarak announced Tuesday he will not run for a new term in September elections but rejected protesters' demands he step down immediately and leave the country, vowing to die on Egypt's soil, after a dramatic day in which a quarter-million Egyptians staged their biggest protest yet calling on him to go.

Soon after his speech, clashes erupted between protesters and government supporters in the Mediterranean city of Alexandria, and gunshots were heard, according to footage by Al-Jazeera television.

Mubarak's half-way concession -- an end to his rule seven months down the road -- threatened to inflame frustration and anger among protesters, who have been peaceful in recent days but have made clear they will not end their unprecedented week-old wave of demonstrations until he is out.

In the 10-minute address, Mubarak appeared somber but spoke firmly without an air of defeat. The president who has ruled the country for nearly three decades -- and during that time has rarely if ever admitted to making a mistake or reversing himself under pressure -- insisted that his decision not to run for a new six-year term had nothing to do with the protests.

"I tell you in all sincerity, regardless of the current circumstances, I never intended to be a candidate for another term," he said. "I will work for the final remaining months of the current term to accomplish the necessary steps for the peaceful transfer of power."

Mubarak, a former air force commander, resolutely vowed not to flee the country. "This is my dear homeland ... I have lived in it, I fought for it and defended its soil, sovereignty and interests. On its soil I will die. History will judge me and all of us."

The United States has been struggling to find a way to ease Mubarak out of office while maintaining stability in Egypt, a key ally in the Mideast that has a 30-year-old peace treaty with Israel and has been a bullwark against Islamic militantcy. An envoy sent by President Barack Obama to work out a transition -- former U.S. ambassador to Egypt Frank Wisner, a friend of the Egyptian president -- told Mubarak directly that that the U.S "view that his tenure as president is coming to close," according to an administration official, who spoke on condition of anonymity because of the delicacy of the ongoing diplomacy.

The U.S. ambassador in Cairo, Margaret Scobey, spoke by telephone Tuesday with Nobel Peace laureate Mohamed ElBaradei, one of the most prominent leaders of the opposition, the embassy said. The pro-democracy advocate has taken a key role with other opposition groups in formulating the movement's demands for Mubarak to step down and allow a transitional government paving the way for free elections. There was no immediate word on what they discussed.

Only a month ago, Mubarak's announcement could have been seen as a formula for a stable handover and would certainly have been a stunning development greeted with joy by reform activists -- many Egyptians have assumed he was certain to run again despite health issues. But after the past week of unheaval, it struck many of those in the streets as too little and as an infuriating stubbornness.

Tuesday's protest marked a dramatic escalation that organizers said aims to drive Mubarak out by Friday. In a single day, the protesters' numbers multiplied more than tenfold, with more than a quarter-million people flooding into Tahrir, or Liberation, Square.

Protesters jammed in shoulder-to-shoulder, with schoolteachers, farmers, unemployed university graduates, women in conservative headscarves and women in high heels, men in suits and working-class men in scuffed shoes. Joining the crowds were significant numbers who defied a government transportation shutdown and roadblocks on intercity highways to make their way from rural provinces.

They sang nationalist songs, danced, beat drums and chanted the anti-Mubarak slogan "Leave! Leave! Leave!" as military helicopters buzzed overhead. Organizers said the aim was to intensify marches to get the president out of power by Friday, and similar demonstrations erupted in at least five other cities around Egypt.

Soldiers at checkpoints set up at the entrances of the square did nothing to stop the crowds from entering. The military promised on state TV Monday night that it would not fire on protesters answering a call for a million to demonstrate, a sign that army support for Mubarak may be unraveling.

Mubarak would be the second Arab leader pushed from office by a popular uprising in the history of the modern Middle East, following the ouster last month of the president of Tunisia -- another North African nation.

The movement to drive Mubarak out has been built on the work of online activists and fueled by deep frustration with an autocratic regime blamed for ignoring the needs of the poor and allowing corruption and official abuse to run rampant. After years of tight state control, protesters emboldened by the Tunisia unrest took to the streets on Jan. 25 and mounted a once-unimaginable series of protests across this nation of 80 million.

The repercussions were being felt around the Mideast, as other authoritarian governments fearing popular discontent pre-emptively tried to burnish their democratic image.

Jordan's King Abdullah II fired his government Tuesday in the face of smaller street protests, named an ex-prime minister to form a new Cabinet and ordered him to launch political reforms. The Palestinian Cabinet in the West Bank said it would hold long-promised municipal elections "as soon as possible."

So far, Egypt's protesters have rejected earlier concessions by Mubarak, including the dissolution of his government, the naming of a new one and the appointment of a vice president, Omar Suleiman, who offered a dialogue with "political forces" over constitutional and legislative reforms.

In an interview with Al-Arabiya television Tuesdsay, ElBaradei dismissed Suleiman's offer, saying there could be no negotiations until Mubarak leaves. In his speech, Mubarak said the offer still stands and promised to change constitutional articles that allow the president unlimited terms and limit those who can run for the office.

Egypt's state TV on Tuesday ran a statement by the new prime minister, Ahmed Shafiq, pleading with the public to "give a chance" to his government.

The United States ordered non-essential U.S. government personnel and their families to leave Egypt. They join a wave of people rushing to flee the country -- over 18,000 overwhelmed Cairo's international airport and threw it into chaos. EgyptAir staff scuffled with frantic passengers, food supplies were dwindling and some policemen even demanded substantial bribes before allowing foreigners to board their planes.

Banks, schools and the stock market in Cairo were closed for the third working day, making cash tight. Bread prices spiraled. An unprecedented shutdown of the Internet was in its fifth day.

The official death toll from the crisis stood at 97, with thousands injured, though reports from witnesses across the country indicated the actual toll was far higher.

But perhaps most startling was how peaceful the protests have been in recent days, after the military replaced the police around Tahrir Square and made no move to try to suppress the demonstrations. No clashes between the military and protesters have been reported since Friday night, after pitched street battles with the police throughout the day Friday.

Egypt's military leadership has reassured the U.S. that they do not intend to crack down on demonstrators, but instead they are allowing the protesters to "wear themselves out," according to a former U.S. official in contact with several top Egyptian army officers. The official spoke on condition of anonymity to discuss private conversations.

Troops alongside Soviet-era and newer U.S.-made Abrams tanks stood guard at roads leading into Tahrir Square, a plaza overlooked by the headquarters of the Arab League, the campus of the American University in Cairo, the famed Egyptian Museum and the Mugammma, an enormous building housing departments of the notoriously corrupt and inefficient bureaucracy.

Protester volunteers wearing tags reading "the People's Security" circulated through the crowds in the square, saying they were watching for government infiltrators who might try to instigate violence. Organizers said the protest would remain in the square and not attempt to march to the presidential palace to avoid frictions with the military.

Two effigies of Mubarak dangled from traffic lights. On their chests was written: "We want to put the murderous president on trial." Their faces were scrawled with the Star of David, an allusion to many protesters' feeling that Mubarak is a friend of Israel, still seen by most Egyptians as their country's archenemy more than 30 years after the two nations signed a peace treaty.

Every protester had their own story of why they came -- with a shared theme of frustration with a life pinned in by corruption, low wages, crushed opportunities and abuse by authorities. Under Mubarak, Egypt has seen a widening gap between rich and poor, with 40 percent of the population living under or just above the poverty line set by the World Bank at $2 a day.

Sahar Ahmad, a 41-year-old school teacher and mother of one, said she has taught for 22 years and still only makes about $70 a month.

"There are 120 students in my classroom. That's more than any teacher can handle," said Ahmad. "Change would mean a better education system I can teach in and one that guarantees my students a good life after school. If there is democracy in my country, then I can ask for democracy in my own home."

Tamer Adly, a driver of one of the thousands of minibuses that ferry commuters around Cairo, said he was sick of the daily humiliation he felt from police who demand free rides and send him on petty errands, reflecting the widespread public anger at police high-handedness.

"They would force me to share my breakfast with them ... force me to go fetch them a newspaper. This country should not just be about one person," the 30-year-old lamented, referring to Mubarak.

Among the older protesters, there was also a sense of amazement after three decades of unquestioned control by Mubarak's security forces over the streets.

"We could never say no to Mubarak when we were young, but our young people today proved that they can say no, and I'm here to support them," said Yusra Mahmoud, a 46-year-old school principal who said she had been sleeping in the square alongside other protesters for the past two nights.

Tens of thousands rallied in the cities of Alexandria, Suez and Mansoura, north of Cairo, as well as in the southern province of Assiut and the southern city of Luxor.

Authorities shut down all roads and public transportation to Cairo and in and out of other main cities, security officials said. Train services nationwide were suspended for a second day and all bus services between cities were halted.

Still, many from the provinces managed to make it to the square. Hamada Massoud, a 32-year-old a lawyer, said he and 50 others came in cars and minibuses from the impoverished province of Beni Sweif south of Cairo.

"Cairo today is all of Egypt," he said. "I want my son to have a better life and not suffer as much as I did ... I want to feel like I chose my president."