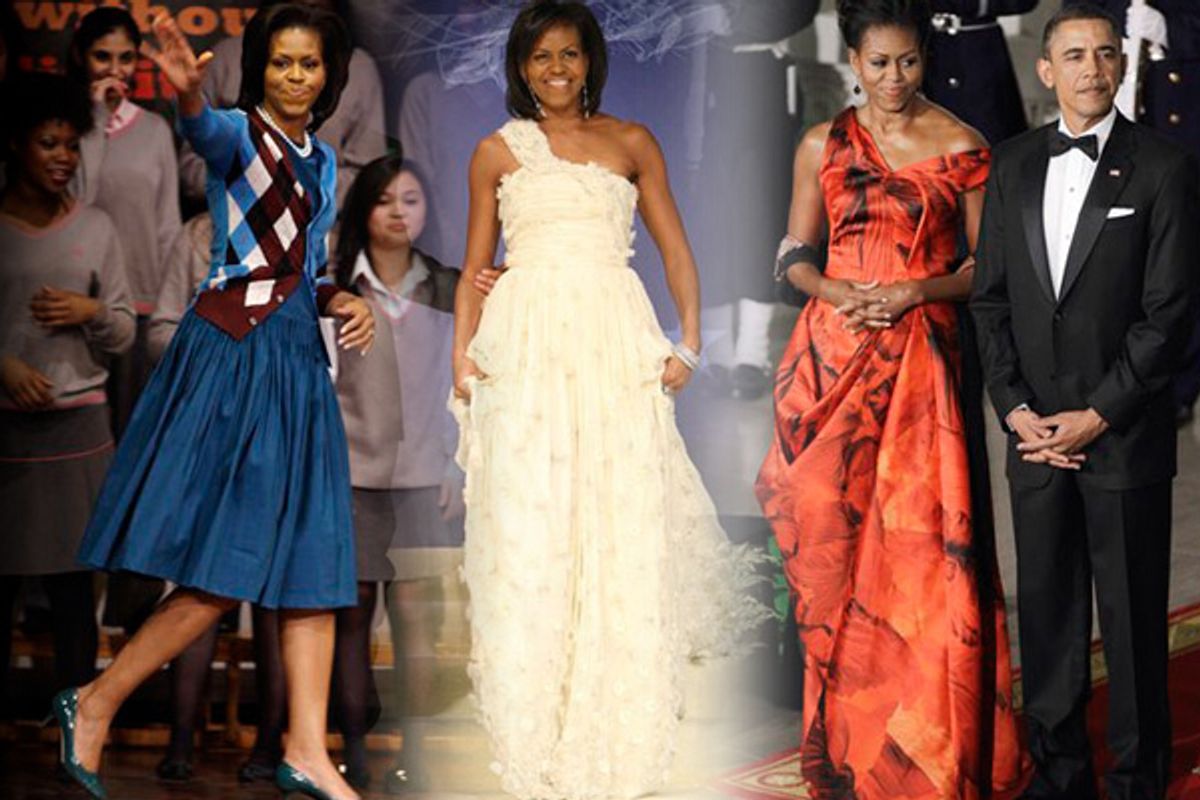 Like other first ladies around the world -- Jackie Kennedy, Carla Bruni-Sarkozy -- Michelle Obama is not just as the president's better half, but an icon of fashion. She's youthful, attractive and fit; she's a working mother who can hula-hoop with her kids and grace a black tie event in the same day. Obviously, she's doing something wrong.

In the two years since her husband's inauguration, Ms. Obama has been criticized for her hairstyles, her occasional overdependence on belts, and, of course, those notoriously powerful, frequently bare arms, the ones David Brooks facetiously referred to as "Thunder and Lightning." Her most recent crime against humanity, the donning of a bold red Alexander McQueen for a state dinner with China's President Hu Jintao earlier this month, prompted the Times' perpetually condescending Cathy Horyn to pen a recent column declaring her fear that Obama's "deeds are being overshadowed by what she wears." "I want her to be known for something other than her fashion," she wrote. "I want her to be a great first lady who truly cares about the lives of Americans at the time when many need help. I want her to be far more than 'prime placement' for a dress label." By wearing what, exactly? Sackcloth and ashes? Elastic-waist Mom jeans? Maybe sensible pantsuits, because God knows Hillary isn't still getting crap for that?

That's the price of being a woman. If you dress down, you're a slob. If you dress up, you're a snob. If you dress conservatively, you're just trying to act like a man. You're trying to be sexy. You're not sexy enough. And that dress makes you look fat, girlfriend. Whoever said clothes make the man was a goddamn liar. It's wardrobe that defines a woman, even if she's a lawyer, mother and health activist who's married to the president of the United States. That's why Kate Betts' new book, to be published next month, isn't called "Everyday Icon, Michelle Obama and Power." It's called "Everyday Icon, Michelle Obama and the Power of Style."

But despite critical comments and breathless speculation over what she'll put on next, Ms. Obama keeps it in context. As she told "Good Morning America" recently, "Women, wear what you love. That's all I can say." She has defined herself by wearing what she loves -- and the way that's been interpreted has been like couture Rorschach for the American mind.