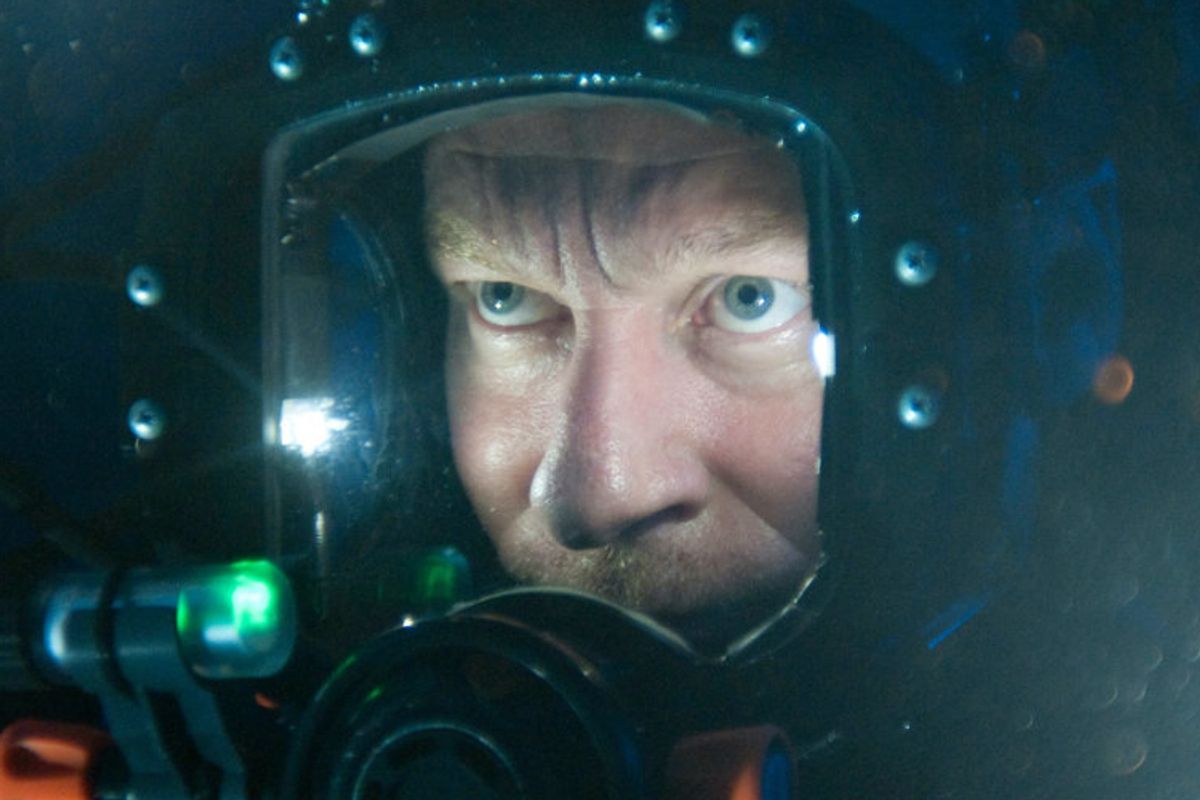 As you may have heard, Werner Herzog's forthcoming subterranean documentary "Cave of Forgotten Dreams" strives to push 3-D technology in new and more adventurous directions. James Cameron -- or his company, or at least some people he's presumably met -- tries to steal a march on Herzog with the far more conventional 3-D action saga "Sanctum," which could also be titled "The Cave of Aussie Arse-Kickers" or "The Cave of Holy Crap That's a Lot of Water" or "The Cave of I Love You Dad You Impossible Bastard."

In one of those Hollywood marketing gambits that's simultaneously truthful and intended to spread confusion, "Sanctum" is described as a film "from executive producer James Cameron, the creator of 'Titanic' and 'Avatar.'" In some ad copy, the words "executive producer" are omitted, and in all cases they're in teeny little letters. And then there's the fact that nobody knows what an executive producer is or does. I don't just mean that nobody in the general public knows, although that's true; nobody in the movie industry really knows either, except that it almost never describes anyone who played a hands-on role in making a film. Most likely, Cameron served as an investor and consultant to "Sanctum" director Alister Grierson, lending the project his imprimatur, his expertise in underwater photography and his 3-D digital technology.

Which is fine and all, but I'm not sure the combination does anyone any favors. Whatever his faults as a filmmaker may be, Cameron would never make an adventure flick that felt this bland and generic. When it isn't killing off its characters one by one during a cave-diving expedition gone wrong, "Sanctum" resembles a Hemingway short story without the story part. Or an episode of "Flipper" without the dolphin. On the other side of the coin, Cameron's involvement pumps what ought to be a low-budget, modestly entertaining Australian action film -- a Roger Corman movie without a monster, let's say -- into a would-be winter blockbuster that's likely to leave both investors and audiences disappointed. As usual, the murky, distorted, through-a-glass-darkly, mildly migrainous 3-D photography is more of a distraction than anything else. Beyond a handful of underwater oohs and ahhs -- mostly involving bobbing, bloated corpses -- the tech wizardry probably subtracts from the overall experience.

I think I only heard the line "Let's do this!" once in "Sanctum," but it's got exactly that kind of pseudo-telegraphic action script (by John Garvin and Andrew Wight). Then again, a whole bunch of the movie occurs underwater, and there's not much talking involved when people are gasping, wheezing, blowing bloody decompression-sickness bubbles and intentionally drowning each other. Lines I did actually hear include: "She's gone, Josh!" "He's gone, Dad!" "You killed her, you bastard!" "He's broken every bone in his body!" "I'm not wearing a wetsuit off a dead person!" and "Have you no decency?" That last one got a laugh, which speaks well for the historical literacy of a Manhattan screening audience, but in the context of some Australians trying to escape from a flooded cave in New Guinea the quotation seems completely random.

At the center of "Sanctum" is Frank (Richard Roxburgh), a growly veteran cave diver viewed by extreme-outdoors National Geographic types as one of the world's great explorers. We know this because his American jerkass boss, Carl (played, somewhat perversely, by Welsh actor Ioan Gruffudd), tells Frank's son Josh (Rhys Wakefield), "Your dad is one of the world's great explorers. He's like Columbus, or Neil Armstrong." Josh doesn't ask who exactly those old-ass dudes might be, but he sure looks like that's what he's thinking. Wakefield, a fast-rising Aussie TV star, is supremely handsome in boy-band, surferish, gym-toned fashion, but cannot simulate self-reflection, even in the boiled-down, Oprah-tized father-son idiom of "Sanctum." When Carl comments that Josh isn't like his father, Josh blurts out, "You mean I'm not an emotionally shut-down Nazi asshole," but the phrase, and the thought process it's meant to convey, is totally divorced from anything else he ever says or does.

Anyway, Frank growls, Carl preens and Josh pouts, and then things start to go horribly wrong in the massive New Guinea cave system they're exploring. A colleague drowns in a risky dive, and a huge tropical storm hits suddenly, trapping our adventurers in fast-rising water with no way back to the surface. Frank, Josh, Carl and a couple of stragglers -- Carl's novice-diver girlfriend, Victoria (Alice Parkinson), and Frank's longtime sidekick, Crazy George (Dan Wyllie) -- will have to navigate the underwater labyrinth, with inadequate oxygen, food and supplies, or die trying.

So "Sanctum" resolves into a combination of "Sphere," "The Descent" and "127 Hours," loaded with extreme-sports action sequences and a near-pornographic assortment of outdoor gear. All this macho adventure of course begins to heal the wounds between father and son, and there's no doubt that Grierson and cinematographer Jules O'Loughlin shoot some impressive underwater images, accompanied by CGI effects. But I'm not sure that the movie's second-rate drama, or its shards of manly philosophy, come anywhere close to justifying the arduous and frequently graphic violence of the journey. Will any of these people ever see daylight again? And is it worth leaving your couch to find out? It would be dishonorable to answer those questions, and anyway the second one is entirely subjective. How comfy is your couch?