"We did not -- repeat -- did not trade weapons or anything else for hostages. Nor will we" 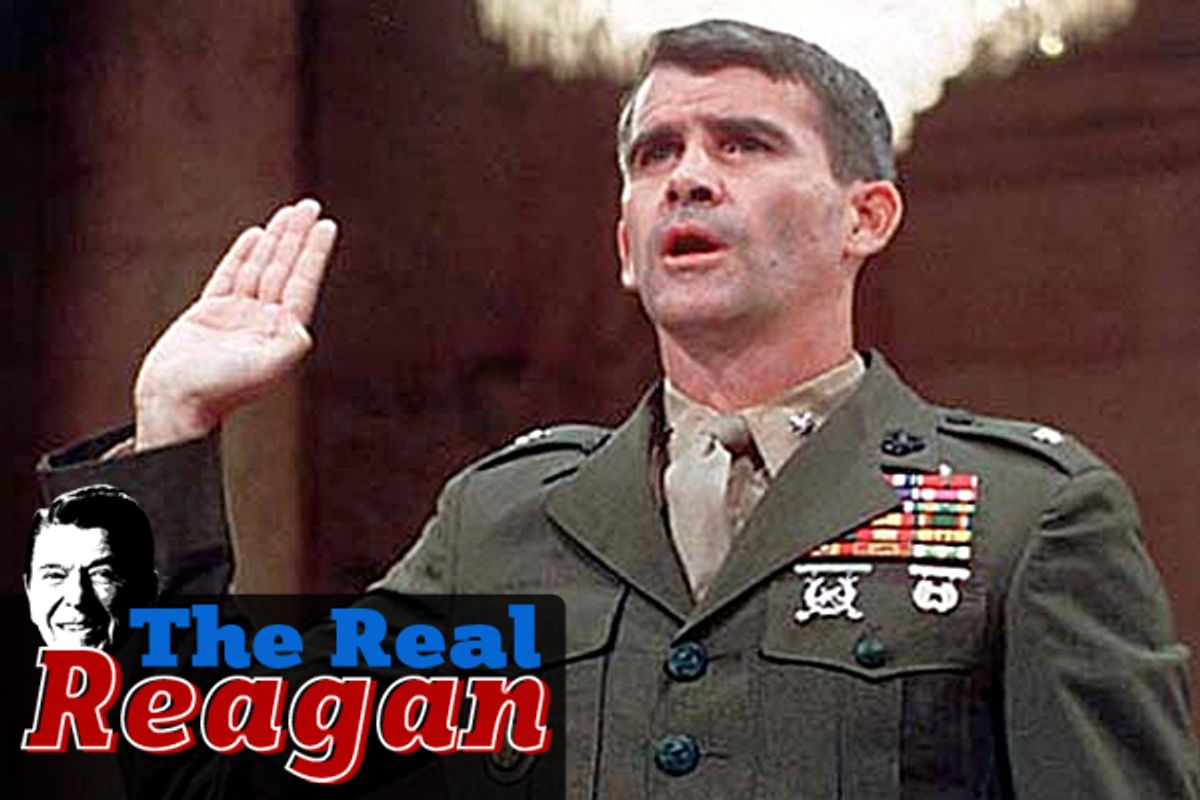 On Nov. 13, 1986, President Reagan declared in a national address, "We did not -- repeat -- did not trade weapons or anything else for hostages -- nor will we." His assertion ran counter to covert operations that had been ongoing for several years. Reagan was faced with an uncomfortable question, transposed from the Watergate scandal, which threatened to strike at his credibility. What did the president know and when did he know it? Having secured a landslide win against Walter Mondale in 1984, Reagan’s second term appeared to be one in which the Cold War, arms control and relations with the Soviet Union would dominate the presidential agenda. Instead, Reagan found himself in the midst of a crisis that threatened his presidency.

Covert arms transactions with Iran and the diversion of profits of the sales to the Contra guerrilla force in Nicaragua lay at the heart of the controversy. The arms sales in the first instance were supposed to act as leverage to assist in getting American hostages released from Lebanon. Missile shipments were significant. Two thousand and four TOW missiles were transferred, along with 18 HAWK missiles. The arms sales were covert. Both Secretary of State George Shultz and Secretary of Defense Caspar Weinberger claimed at the time to have been unaware of the actions. They were carried out by members of the National Security Council, including National Security Advisors Robert McFarlane and John Poindexter and Lt. Col. Oliver North, an NSC staff member. On account of the Iran-Iraq war, restrictions on arms sales to Iran were in place at the time of the weapons transfers. Members of Reagan's own administration and members of Congress believed that the administration’s decree that there should be no deals with terrorists was being adhered to.

In Central America, different challenges faced the president. Congress had enacted several restrictions on the nature of government aid that could be supplied to the Contras, a guerrilla army fighting the leftist Sandinista government in Nicaragua. The Boland Amendment specified the volume of funds that could be spent on this cause and the type of assistance that could be provided. The Contra cause was passionately supported by Reagan. Beginning in 1984, members of the National Security Council, particularly North, began seeking alternative non-U.S. government sources of support. King Fahd of Saudi Arabia, for example, provided a million dollars per month from May to December 1984. The upkeep of the Contras continued in a covert fashion, with support from a disparate array of U.S. government officials, opportunistic middlemen and operatives in the NSC and CIA. In essence, Reagan's foreign policy was being privatized and shielded from both Congress and the American people.

The linkage of these two covert elements in U.S. foreign policy was enacted primarily through the endeavors of North, assisted and shielded by close associates both within and out of the government. By early 1986, profits from the arms sales were being channeled to provide unauthorized support for the Contras. Two disparate elements of covert operations merged, and a logistical and financial web underpinned complex international transactions, replete with risks to several areas of America's diplomatic interests. Reagan's precise knowledge of the detail of the covert operations is unclear, and with a lack of written detail from the president on what he had and had not authorized, it was plausible for him to deny knowledge of, and involvement in, the operations. However, as chief executive, his constitutional duty to ensure that the laws had been faithfully exercised was placed in doubt.

Operations unraveled when a transport plane supplying Contra forces crashed in Nicaragua in the fall of 1986. Records recovered from the aircraft suggested unwarranted U.S. government involvement. As questions mounted, North and his secretary, Fawn Hall, shredded records and implemented a coverup. President Reagan quickly became entangled in the scandal. He appeared on television in November '86, denying that arms had been traded for hostages. Thereafter, in a press conference held with Attorney General Ed Meese, he detailed that an investigation had shown that proceeds from the arms sales had been diverted to the Contras. Poindexter resigned and North was dismissed. Poll numbers for the president proved calamitous. He suffered the biggest recorded one month fall in job approval, from 67 percent to 46 percent. In another survey, only 12 percent believed Reagan's assertion that he didn't have prior knowledge of the diversion of funds.

1987 proved to be a challenging year for the president. A slow drip of information, much of it detrimental to Reagan’s credibility, sapped at public support. Media speculation abounded as to the depth of presidential involvement, and an independent counsel was appointed to address issues of legality. The Tower Report, an investigation into the National Security Council, held Reagan accountable for a lax managerial style and aloofness from policy detail. Congressional hearings on Iran-Contra provided a media circus in the summer of 1987, with North, resplendent in a Marine uniform, giving a captivating testimony as to his involvement in covert operations. This performance divided public opinion, with conflict emerging as to whether North was an American patriot, or an individual who had neglected both the letter and the spirit of the law. Although fluctuations in public opinion were initially detrimental to Reagan, they also provided his salvation. Reagan’s strategy distanced him from the covert action. He cast himself as uninformed, accepting condemnation for account -- as opposed to admitting participation, with the associated legal implications and potential impeachment proceedings. Legal proceedings followed the Iran-Contra hearings, including testimony by Reagan after he left office. A lack of hard detail, conflicting memories and the former president’s inability to recall specifics regarding the operations created a closure to the scandal, which allowed it to have prominence without necessarily entertaining drastic consequence.

Iran-Contra altered impressions of Reagan and his presidency. The Great Communicator struggled to articulate a message regarding his involvement in the scandal and to explain how a complex operation originating in the White House could have taken place without his knowledge or authority. Dealings with terrorists, covert arms trades and the transfer of funds to supply an insurgent army suggested that the spirit -- if not the letter -- of the law had been undermined by Reagan’s operatives. President Reagan, despite the scandal, recovered his credibility, resurrected his poll numbers and reestablished his authority by the end of his second term in January 1989. Nevertheless, the scandal circus of the Iran-Contra affair blighted his legacy and suggested that his Teflon reputation had pronounced limitations.

Robert Busby is the author of "Reagan and the Iran-Contra Affair: The Politics of Presidential Recovery."