There is much to appreciate and even like about America's 40th president, and his two terms in office were not without significant achievements. But Ronald Reagan and his presidency are also badly misunderstood. To mark the 100th anniversary of his birth, we are offering what we hope will be a respite from the hagiography that has taken hold elsewhere -- a critical, but fair and respectful, exploration of the real Ronald Reagan. Read the intro. » The divisive underbelly of Reagan's sunny optimism by Matthew Dallek » The "Southern Strategy," fulfilled by Steve Kornacki » The scandal that almost destroyed Ronald Reagan by Robert Busby » We fought a war on lies, and lies won by Joan Walsh » The era of big spending and massive deficits by Andrew Leonard » Ronald Reagan cared more about UFOs than AIDS by Alex Pareene » Reagan's embrace of apartheid South Africa by Justin Elliott » When Reagan was (much) less popular than Carter by Steve Kornacki Related Stories » Um, yeah, about Ronald Reagan's popularity ... » Ron Reagan talks about his father's Alzheimer's » About that Palin-Reagan comparison » This week in baseless Reagan hagiography » Mondale on Obama, and how he could've beaten Reagan » Watch Reagan and the GOP get crushed in a midterm » Goodbye, Ulysses; Hello, Ronnie » What Sarah Palin forgets (or never knew) about Ronald Reagan 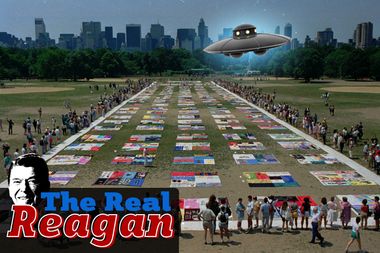