What the right won't admit about Reagan

What happens when a caller confronts Rush Limbaugh with the Gipper's actual record? 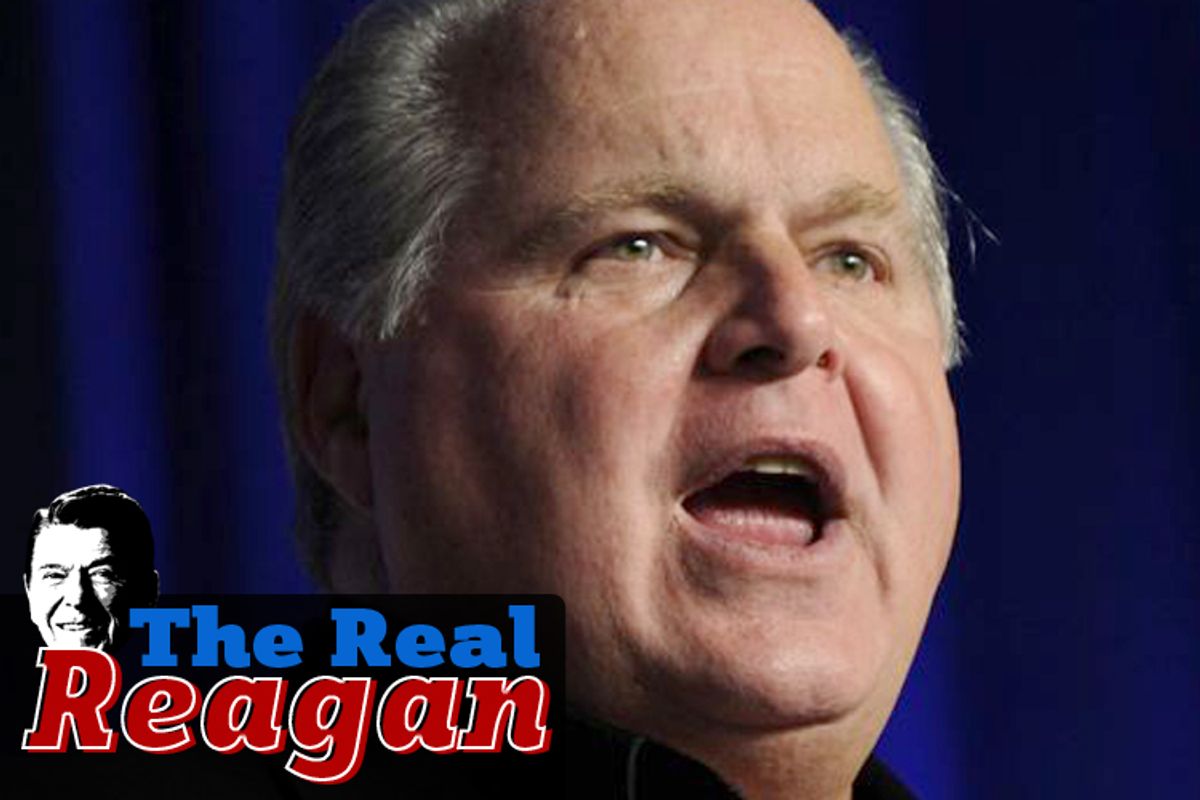 Nothing better symbolized Ronald Reagan's 100th birthday celebration than that it should fall on Super Bowl Sunday, with Air Force jets roaring unseen over a hermetically sealed stadium, almost, but not quite, drowning out a tarted-up former Mouseketeer who mangled the lyrics of the Star-Spangled Banner.

It was all there: the bombast, the grandiose self-congratulation, the willful blindness, the elevation of showbiz spectacle to patriotic rite. After which, thankfully, a pretty good NFL football game broke out. It's for pseudo-events like the Super Bowl, I believe, that a merciful God gave us high-def DVRs.

How fitting that George W. Bush, the late President Reagan's vicar on Earth, was seated in a front-row celebrity box to witness the spectacle. Reagan's genius as a politician was that he repackaged and sold to millions of Americans the comforting daydreams of the 1950s. Not the '50s as they were -- no Korean War, no Army-McCarthy hearings, no lynchings, no John Birch Society denouncing commie traitor "Ike the Kike" -- but as depicted in TV sitcoms like "Ozzie and Harriet, "Leave It to Beaver" and "The Andy Griffith Show."

Playing the president, Reagan essentially recapitulated the Robert Young role in "Father Knows Best" -- firm but fair, and unfailingly optimistic. True, Reagan had a disconcerting habit of conflating film scripts with reality: talking feelingly, for example, of his experiences liberating Nazi death camps at the end of World War II, which never happened.

Captain Reagan of the First Motion Picture Unit served in California for the duration of the war. But he got away with exaggerating, biographer Edmund Morris believes, because he'd spent weeks editing raw film footage from Buchenwald. His emotional reaction was sincere.

To an America still nursing a Woodstock, Kent State, Vietnam and Watergate hangover, Reagan's performance was reassuring. Although his personal coolness was notorious -- aides wondered if he knew their names, and even his children complained that he treated them like strangers -- the character Reagan played in the Oval Office was hard to dislike.

That's not to say Reagan did no harm. George W. Bush's epic failures came about largely because, unlike Reagan, whose fealty to right-wing ideology was at best inconsistent, he put dogmatic "Reaganism" into action.

Consider a telling exchange on -- where else? -- Rush Limbaugh's program last week. Presumably by decoying Limbaugh's screeners, whose job it is to prevent the host from being confronted by anybody who knows what they're talking about, liberal blogger Mike Stark got through.

Stark said that he couldn't understand why conservatives idolize Ronald Reagan. He listed his reasons: "Instead of privatizing Social Security," Stark said, "he raised taxes. We're all paying higher taxes today out of our paychecks every single week because he decided to save Social Security."

Talking over Limbaugh's constant interruptions, he continued. "The Greenspan Commission. He signed it into law, and it raised taxes on Social Security."

"What?" Limbaugh blustered. "Wait, you're talking about Reagan or Clinton?"

"I'm talking about Reagan. Reagan did that. He raised taxes on Social Security. He negotiated with terrorists, sending -- over and over again -- arms to Iran in exchange for hostages."

That would be the Iran-Contra scandal that probably would have ended in Reagan's impeachment had he been a Democrat.

"He's a tax-raiser, an amnesty-giver, a cut-and-runner, and he negotiated with terrorists," Stark continued. "Why is he a hero to conservatives?"

Limbaugh was beside himself. "Where did you get this silly notion that Reagan raised taxes on Social Security? What websites do you read? Where did you pick that up?"

"Look up the Greenspan Commission," Stark advised. "It's not too hard to find. It's a matter of history."

He's right. Reagan increased payroll taxes in 1983. History records that, alarmed by spiraling deficits, he signed tax increases during six of his eight years in office. Even so, his administration tripled the national debt, to almost $3 trillion.

Consistent with the GOP's faith-based War on Arithmetic, his acolyte Dubya then redoubled the debt to $10.4 trillion, leaving a $1.4 trillion yearly deficit.

Note to the Tea Party: Had President Clinton's tax policies remained in place since 2001, the national debt GOP politicians pretend to agonize over would no longer exist.

But Stark never got that far, because Limbaugh hit the mute button, then delivered a lengthy soliloquy about how liberals can't be reasoned with, only defeated. Is there a bigger faker in American life?

"Ronald Reagan," Sen. Lindsey Graham, R-S.C., has ruefully observed, "would have a hard time getting elected as a Republican today."

There's no doubt about it.