We fought a war on lies, and lies won

Trashing the War on Poverty, Reagan destroyed the social compact that built the postwar American dream 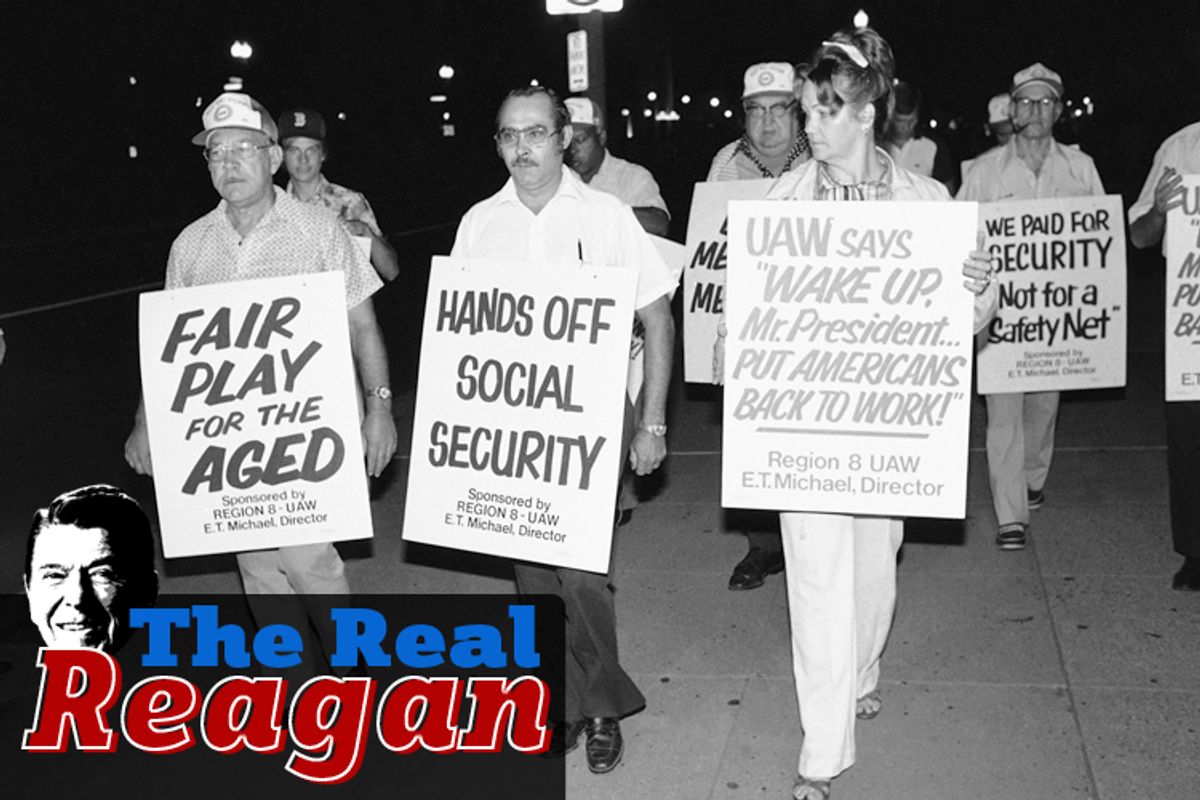 Ronald Reagan gave America so many pretty sayings, but when it comes to social equality, he'll go down in history for his lyrical lie, "The federal government declared a war on poverty, and poverty won." (He said it many times, many ways; that exact quote is from his 1988 State of the Union address.)

Of course, Reagan was wrong. Poverty declined sharply after the war on poverty commenced. According to the Institute for Research on Poverty, in 1959 the individual poverty rate was 22 percent. It hovered there until about 1964, when it began to drop; by 1973, it was 11 percent. Then it began to climb again, to 15 percent in 1983. Thanks to the economic boom at the end of Reagan's tenure, it dropped by about a point, and then jumped back to 15 percent by the time President Clinton took office. Under Clinton, it fell to 11 percent. Under George W. Bush, it climbed back over 14 percent, and it has continued to inch upward under Barack Obama.

I pushed myself to see whether maybe poverty rates declined faster before the war on poverty than they did afterward. It's tough to do; the Census Bureau didn't keep detailed data on poverty until 1959, which is why you'll see that year used so often. But there were agencies and researchers studying poverty. In a majestic Dwight MacDonald New Yorker review of Michael Harrington's "The Other America," I found estimates for the years from the Depression through 1960. They're fascinating. It's clear the New Deal did little to reduce poverty; the war plus the postwar reconstruction was the real anti-poverty program: The number of Americans making under $4,000 (the poverty estimate in Harrington's book) dropped by a quarter from 1947 to 1953, and by another sixth by 1960. But as MacDonald (and Harrington) noted, despite America's affluence, the decline in poverty rates had slowed. A recession during the Kennedy administration pushed the rate up a little bit, but then, under Johnson, it began to plummet.

It's hard to tease out how much of the drop in poverty was due to government spending and how much was the strong (for a while) 1960s economy. Still, the postwar boom only cut the rate by a third, so it seems safe to conclude we cut it in half with the help of the War on Poverty. We should remember that the Great Society gave the most help to elderly Americans, whose poverty rates dropped even more sharply. For the non-elderly, government assistance helped some, but not nearly as much. That's different from saying government programs hurt the poor. Mostly, for the non-elderly poor, the poverty rate closely tracks the median income. Meaning, "It's the economy, stupid," not, "It's the stupid poverty programs."

Not coincidentally, the Reagan years saw a boom in dishonest research "proving" that welfare itself caused the rise in single-female-headed families (who are in fact more likely to be poor). Charles Murray's "Losing Ground" purported to put meat on the bones of Reagan's "Poverty won" argument, marshaling an arsenal of statistics to show that poverty programs, especially what was known as "Aid to Families With Dependent Children," encouraged promiscuity, rewarded the lazy and destroyed the family -- especially the black family. Anti-poverty scholars fought back with their own statistics: The number of white female-headed households not on welfare exploded in the same years, making it unlikely welfare was causing the trend; the share of children born to low-income black single mothers rose sharply largely because married black mothers were having many fewer children, not because single women were having more. But thanks to Reagan's sunny claims from his bully presidential pulpit, and the right-wing philanthropy enlisted to spread Murray's lies, the other side prevailed. You might say those scholars fought a war on lies, and lies won.

It's difficult to overstate how much Reagan-era propaganda hurt the country. It distorted our understanding of how to help low-income people, as well as our optimism they could be helped, and it corroded the social contract that had prevailed since the New Deal. With hindsight, I'm a skeptic of the '60s push to increase the welfare rolls; I wish we'd worked harder to guarantee the poor jobs instead. We didn't worsen poverty, but we contributed to the isolation of the urban poor from the rest of us, and failed to create a vision of an economy that had a productive place for everyone. Ironically, as Reagan was ranting about the government doing too much for the poor, no one was talking about the real beneficiaries of public largess in those years: the wealthiest Americans.

Despite his reputation as a tax slasher, Reagan raised taxes three times, and tripled the deficit during his eight years in office. Sadly, his working-class "Reagan Democrat" admirers don’t seem to remember that one of his tax hikes raised payroll taxes, which hurt poor and middle-class Americans and shielded the wealthy. The main reason he's remembered as a tax-cutter is because of what he did to tax rates for the uber-rich: He slashed the top rate from 70 percent to 28 percent, and income inequality has soared ever since, so that today, the top 1 percent of Americans controls a quarter of the nation's wealth, as opposed to 8 percent when Reagan became president.

If that 70 percent rate sounds a little high, it's useful to remember that the top rate was 94 percent at the end of World War II, and after a brief drop to 82 percent, it stayed in the 90s under Republican Dwight Eisenhower; it was Democrat John F. Kennedy who slashed it to 70 percent. (It's actually worth reading this whole article.) The über-rich -- the top tenth of 1 percent -- saw their share of income drop from nearly 12 percent before the Great Depression, to under 3 percent by the 1970s. Those are the tax rates that powered the postwar boom -- the expansion of public education and universities, highway construction and home-ownership, government-funded research and development -- that we think of as the American dream.

So let's be clear: Reagan began a destructive spiral of concentrating wealth in the hands of fewer people, and deregulating business, that culminated in the economic crash we're still digging out of today. He even heralded it, by signing the Garn-St. Germain Depository Institution Act, which waved the "Go" flag on the savings and loan scandal, and foreshadowed the repeal of Glass-Steagall a decade later. To review: Under Reagan, income inequality began to grow, household savings dwindled, household debt correspondingly began to rise, and the clout of the financial industry exploded. The top 0.1 percent of Americans saw their share of income climb higher than it was before the Great Depression. And here we are.

Finally, while President Reagan is remembered as a genial optimist, Matthew Dallek and Steve Kornacki are right to remind us of the original Reagan: the proto-Nixon, who used race and fear to become California's governor in 1966. Reagan defeated California Gov. Pat Brown, running against Brown's supposed tolerance for black Watts rioters and Berkeley radicals, channeling white fears of urban violence, and riding a backlash against civil rights and the Great Society. When Reagan beat Brown he vanquished liberalism, and liberalism "never really recovered," Dallek wrote in "The Right Moment," his book about Reagan's first victory. Nixon learned from Reagan, and played on white fears that government was helping undeserving blacks; Reagan then learned from Nixon, and cut out the nasty racial rhetoric, attacking government, rather than its beneficiaries. By the time he became president, he talked less about "welfare queens," and he'd stopped railing about "young bucks" buying steaks with food stamps, or calling city streets "jungle paths after dark." But the damage had been done, and all but the super-rich are poorer for it.