His foreign policy legacy includes an alliance with a racist government 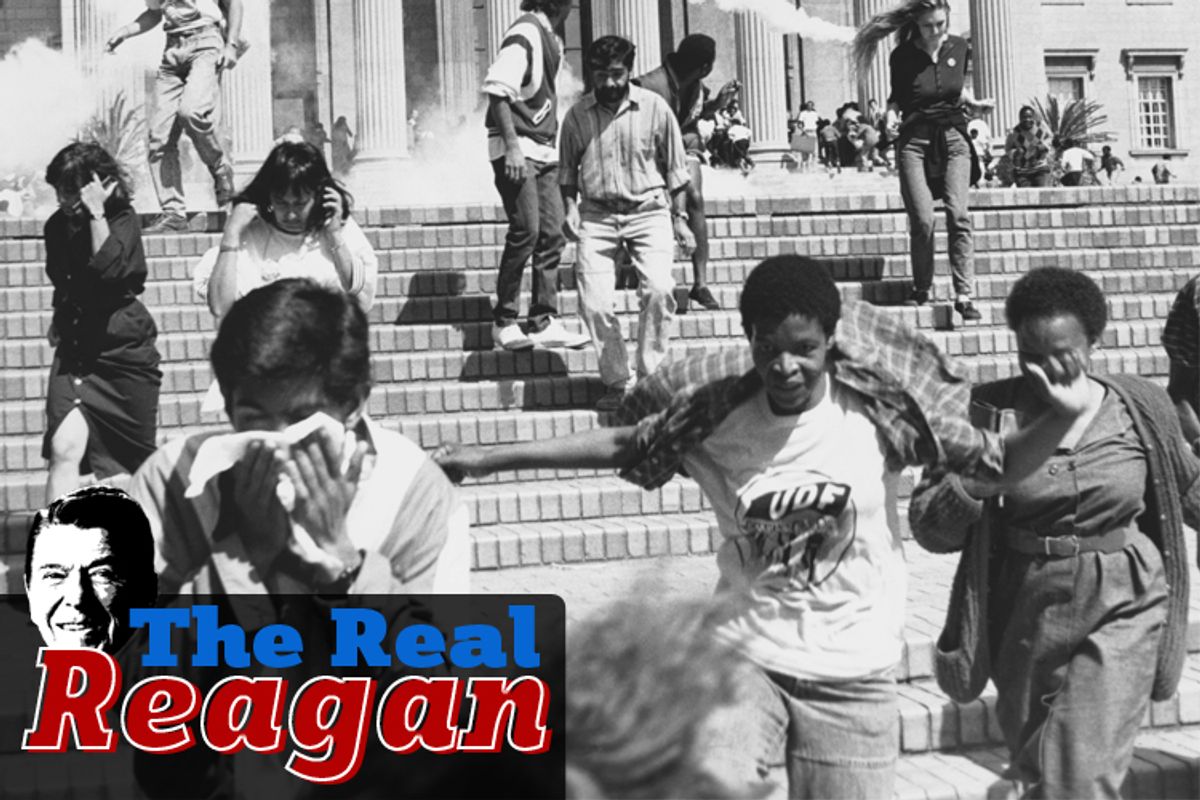 Student demonstrators at Johannesburg's Witwatersrand University flee as police fire tear gas at them during an anti-apartheid protest rally August 31, 1989.
--

The regime of apartheid in South Africa, under which nonwhites were systematically oppressed and deprived of their rights, is remembered as one of the worst crimes against humanity of the 20th century.

Despite a growing international movement to topple apartheid in the 1980s, President Ronald Reagan maintained a close alliance with a South African government that was showing no signs of serious reform. And the Reagan administration demonized opponents of apartheid, most notably the African National Congress, as dangerous and pro-communist. Reagan even vetoed a bill to impose sanctions on South Africa, only to be overruled by Congress.

On a trip to the United States after winning the Nobel Prize in 1984, Bishop Desmond Tutu memorably declared that Reagan's policy was "immoral, evil and totally un-Christian." Reagan's record on South Africa was also marked by at least one embarrassing gaffe, when he told a radio interviewer in 1985: "They have eliminated the segregation that we once had in our own country -- the type of thing where hotels and restaurants and places of entertainment and so forth were segregated -- that has all been eliminated." Of course, that was simply not true, and Reagan later walked the statement back.

To learn more about  Reagan's policy on South Africa, I spoke with David Schmitz, a historian at Whitman College who has written widely on U.S. foreign policy. His new book is a biography of Brent Scowcroft. What follows is a transcript of our conversation, edited for length and clarity.

Where did things stand between the U.S. and South Africa when Reagan entered office in 1981?

Carter had imposed sanctions and restrictions on South Africa and also had publicly criticized the South African government many times. Reagan went back to supporting the government, and he did it under the guise of the policy of "constructive engagement." This policy had been worked out by Chester Crocker, later a Reagan State Department official, who wrote about it in Foreign Affairs in 1980.

Can you define that term, constructive engagement?

The idea of constructive engagement was that there were moderates in the South African government and so you wanted to encourage them. And if you constructively engaged with them, they would promote gradual change, political reform and so on. But to just oppose the government would make it intransigent and that would create greater polarization, and that was a situation that only extremists would benefit from. The Reagan administration saw the African National Congress (ANC) as a dangerous, pro-communist movement. So the notion of constructive engagement was gradual reform. It was also linked to Reagan supporting the Sullivan principles as a proper way to bring about change.

What were the Sullivan principles?

They were an idea promoted by an American religious leader, Reverend Leon Sullivan, a Baptist minister in Philadelphia. What he said was that, if corporations agree to certain standards of fair employment in South Africa, they shouldn't be subjected to protests or divestiture. At that time there were a lot of protests in the United States demanding that universities and corporations divest from South Africa. Sullivan argued that these principles would be part of a middle ground between two extremes that would allow for change and betterment of the conditions of blacks in South Africa. Reagan seized upon that. Constructive engagement was presented as a middle ground between apartheid forever and those that wanted immediate change -- which Reagan and Crocker argued would lead to chaos that the Soviets would take advantage of.

So what did that policy mean on the ground? Were the two governments close?

Yes, the Reagan administration worked very closely with [South African Prime Minister] P.W. Botha. He came to Washington and there were meetings in Europe as well. Reagan gave a lot of public support to the South African government, portraying Botha as a moderate who was willing to start political reforms and would stay on the side of the United States and help us block Soviet influence in southern Africa.

How did that square with what was actually going on in South Africa?

Nothing was going on. The reforms were cosmetic at best. Sullivan would eventually say in 1987 that it didn't work. The crackdown of 1986 and the reimposition of martial law just made a total lie out of the notion that there were moderates in the Afrikaner government.

Talk about that crackdown and the U.S. response to it.

There was a lot of pressure building up in the United States, and Congress was threatening to pass legislation that would put sanctions on South Africa and restrict the flow of American aid to South Africa. Reagan always said he would veto that. Then Botha gave a speech on Aug. 15, 1985, in the face of increasing unrest in South Africa -- this known as the "Rubicon speech." And he said that South Africa would never accept one man, one vote in a unitary system. Real democracy, he said, would lead to chaos. This disappointed Reagan. But he stuck with Botha. Pressure built both inside of South Africa and outside, and the protest inside of South Africa led to the imposition of martial law. Congress then voted sanctions.

Was this the incident in which sanctions were voted and Reagan vetoed and was then overruled?

Yes. Sen. Nancy Kassebaum took the lead of the Republicans. She said that the situation in South Africa was virtually beyond hope and that constructive engagement was irrelevant. This regime was not going to change unless forced to. The United States was just party to this continued oppression. That sort of broke the Republican unity behind Reagan on this policy. The larger context was that Reagan had just failed in the Philippines in trying to back [Ferdinand] Marcos to the end. The Reagan doctrine was collapsing in Central America as well, with opposition growing to his interventions there. So that was also now happening in South Africa. The House vote wasn't even recorded, it was so overwhelming in favor of imposing sanctions. The Senate vote was more than enough to override the veto, which it did.

They called the ANC terrorists. It was just continuing this notion that the ANC members are the extremists and the South African government has these moderates, and you're going to end up with one extreme against the other if you don't work with the government. Clearly, it never worked. This was a flawed policy.

By the end of the Reagan years, had the policy changed?

Well, Reagan's attitudes hadn't changed, but the policy changed because Congress changed it and voted sanctions. That cut off a lot of the flow of American capital. Sullivan renounced his position. Bishop Desmond Tutu came to the United States in 1984 after being awarded the Nobel Prize. He speaks in the House of Representatives and says that constructive engagement is a farce, and that it just entrenched the existing order. He said Reagan's policy was "immoral, evil and totally un-Christian."

After Reagan met with Tutu, he was asked at a press conference to talk about their meeting. Reagan said, "It is counterproductive for one country to splash itself all over the headlines, demanding that another government do something." Then he claimed that black tribal leaders had expressed their support for American investment. He was trying to discredit Tutu's argument that U.S. policy had hurt blacks. Anti-communism trumped so much in Reagan's view of the non-Western world.

Would you argue that Reagan's foreign policy extended the life of the regime in South Africa?

I think a lot of well-meaning people in the United States bought the Sullivan principles and constructive engagement, because it seems reasonable. Reagan would say, "If we're willing to talk to the Russians, why aren't we willing to talk to the South African government?" We're going to encourage them to moderate and reform -- it sounds reasonable. But there was no real pressure. It was all talk. And it was exposed as that.