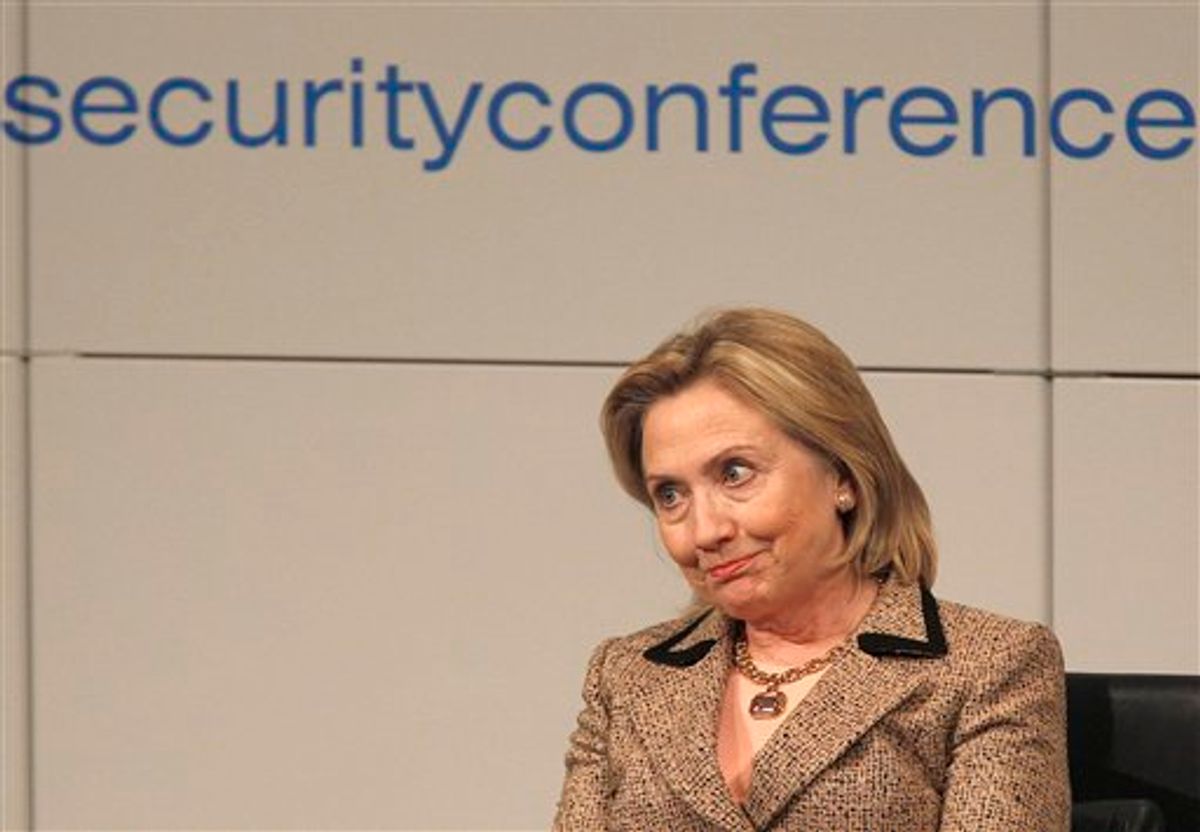 The U.S. threw its weight behind nascent reforms led by Egypt's new vice president as Secretary of State Hillary Rodham Clinton said Saturday that international support was crucial to prevent extremists from hijacking the political transition.

Clinton's comments at an international security conference suggested that the U.S. believes Egyptian President Hosni Mubarak has set in motion the "orderly transition" it had demanded by appointing Suleiman, pledging not to run for re-election in a scheduled September vote and taking his son, Gamal, out of the succession picture.

"We have to send a consistent message supporting the orderly transition that has begun," Clinton told government officials, politicians, security experts and policy analysts.

Suleiman, appointed as Egypt's first vice president during Mubarak's three-decade reign, has begun to reach out to long-ignored opposition figures and aims to make constitutional and other changes before the elections are held. Suleiman was elevated from intelligence chief amid violent anti-government protests seeking to topple Mubarak.

Clinton said support for Suleiman's efforts was essential despite the risks of short-term instability, as illustrated by reports of an alleged attack Saturday on an oil pipeline in the Sinai Peninsula. An Egyptian gas company official said the explosion and fire was caused by a gas leak; a regional official said earlier that sabotage was suspected.

Such unsubstantiated reports bring "into sharp relief the challenges that we are facing as we navigate through this period," Clinton said.

"There are forces at work in any society and particularly one that is facing these kinds of challenges that will try to derail or overtake the process to pursue their own specific agenda," she said. "It's important to support the transition process announced by the Egyptian government actually headed by now-Vice President Omar Suleiman."

Her comments were a departure from the administration's earlier stance that centered almost entirely on the need for the transition to begin immediately.

"It takes time to think those through, to decide how one is going to proceed, who will emerge as leaders. The principles are very clear. The operational details are very challenging," she said.

Frank Wisner, the retired American diplomat sent by President Barack Obama to Cairo this past week to tell Mubarak that the U.S. saw his rule coming to an end, said Mubarak had to keep a leadership role at least temporarily if the "fragile glimmerings" of progress were to take hold as quickly as needed.

"President Mubarak's role remains utterly critical in the days ahead while we sort our way toward a future" in which Egypt is peaceful and moderate, and committed to its international obligations, including its peace treaty with Israel, Wisner said in his first public comments about the mission.

He told the conference by a video from New York that the international community had to play a "protective and encouraging role."

"There is a chance but we are in the early stages of seeing this take shape," Wisner said. "It is not certain that matters cannot slip off the rails, that you can't have renewed violence, violence in which radicals can push their case forward."

"The region is being battered by a perfect storm of powerful trends," she said. "Leaders in the region may be able to hold back the tide for a little while, but not for long."

She said change is a "strategic necessity" that will make Arab nations stronger and their people more prosperous and less susceptible to extremist ideologies. The region will face greater threats and insecurity without such actions, she said.

"This is not simply a matter of idealism; it is a strategic necessity," she said. "Without genuine progress toward open and accountable political systems, the gap between people and their governments will grow, and instability will only deepen."

Clinton's speech mirrored one she delivered last month in Qatar, when she warned regional leaders that the foundations of progress and development were "sinking into the sand" and would continue to do so unless those leader acted to meet the aspirations of their people, particularly youth populations.

A day after that speech, Tunisia's longtime autocratic president was driven into exile amid a rebellion that in turned inspired protesters in Egypt to step up demonstrations against their leadership.

She said incremental steps that do not give people full freedom and opportunity will breed further discontent.

"This is what has driven demonstrators into the streets of Tunis, Cairo, and cities throughout the area," she said. "The status quo is simply not sustainable."

"Some leaders may believe that their country is an exception -- that their people will not demand greater political or economic opportunities, or that they can be placated with half-measures," she said. "In the short term, that may be true. But in the long-term that is untenable."

Many Middle Eastern leaders, including Mubarak, long had argued that opening up political space without controls would empower extremists bent on destabilizing their countries and the region.

Israeli officials have questioned calls for sweeping democratic reform in the region. They fear that peace deals with Egypt and Jordan could be threatened and their security imperiled if friendly Arab governments are ousted by popular uprisings backed by radical Islamists.

Clinton said democratic transitions can be messy and can fail when "hijacked by new autocrats who use violence, deception, and rigged elections to stay in power or to advance an agenda of extremism."

But she said leaders who deny their people basic rights open the door to instability rather than close it.

"If the events of these past few weeks prove anything, it is that the governments who consistently deny their people freedom and opportunity are the ones who will, in the end, open the door to instability."