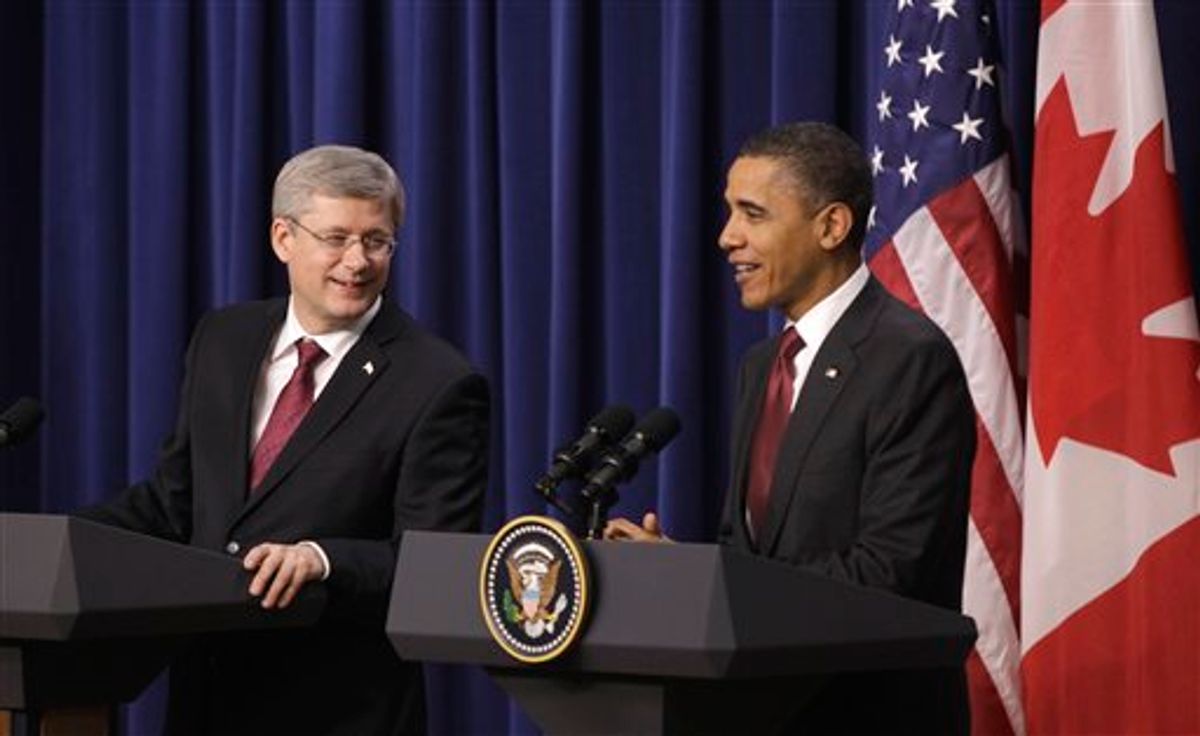 His beloved Chicago Bears aren't in the big game, but President Barack Obama is swallowing hard and throwing a Super Bowl party anyhow, in a bipartisan celebration of the nation's biggest sporting event.

But it's hard to know which part of the evening will give him more heartburn -- seeing the Bears' archrivals, the Green Bay Packers, clashing with the Pittsburgh Steelers for football's crown, chewing on the Wisconsin sausage the mayor of Milwaukee is bringing or sitting for a pregame interview with Fox's Bill O'Reilly.

The conservative show-host and pundit has been granted the interview since Fox is broadcasting this year's game from Cowboys stadium in Arlington, Texas. It's certainly not out of love for Fox, which has been denounced by Obama aides as a vitriolic mouthpiece for his foes. Last year, when CBS had the game, Obama was interviewed by Katie Couric.

Ahead of his interview, O'Reilly forecast it'll be "the most watched . that's ever been done in the history of mankind."

Despite the sometimes hard feelings, it's hardly Obama's first interview with Fox, and not even his first with O'Reilly. The two faced off in September 2008 when he was a candidate.

Still, the interview, which was being taped during the day Sunday, fit neatly into Obama's theme for this year's Super Bowl bash: an above-the-fray -- albeit somewhat resigned -- good fellowship. And its background includes his appeals to turn down the heat of political rhetoric, first after his November election "shellacking," then after the deadly shootings last month at a Tucson, Ariz., congressional district meeting.

Hence the White House guest list, which numbers around 100 and includes lawmakers and officials from both parties -- and both states with a stake in Sunday's game. It included Pennsylvania senators Robert Casey, a Democrat, and Pat Toomey, a Republican; Wisconsin Rep. Reid Ribble, a Republican who represents Green Bay; and Transportation Secretary Ray LaHood, one of two Republicans in the Obama Cabinet.

As to the game itself, since the Bears aren't in it, Obama has pronounced himself neutral -- unlike last year, when he openly rooted for the Steelers or the previous year when he was "pretty sympathetic" to the New Orleans Saints.

His neutrality is born of a diehard fan's pain.

The Bears were trounced by the Packers in the NFC championship game. Three days later, the day after his State of the Union speech, Obama flew into Green Bay for a political speech and was promptly handed a Packers jersey and obliged to pose for pictures. He accused his hosts of "rubbing it in."

Later, during a factory tour, while saluting the long Packers-Bears rivalry and wishing the Packers good luck, he couldn't help adding, "We will get you next year."

Then, this past week, Obama showed his AFC side -- and stressed his Steelers credentials -- during a speech at Penn State. Noting he's named team owner Dan Rooney ambassador to Ireland, he said he's "got some love for the Steelers," too.

No sitting president has ever been to a Super Bowl. Obama said he'd like to go -- if the Bears were in it.

But given the mass viewership and the hoopla surrounding the game, recent presidents have developed a not-very-surprising need to see and be seen on the big day.

Jimmy Carter famously made a $5 bet with his mother, Miss Lillian, on the outcome of the 1979 Super Bowl -- and lost, when the Dallas Cowboys beat the Steelers.

In 1985, just hours after being sworn in for his second term, Ronald Reagan, who portrayed a football player in the movies (1940's "Knute Rocknet All American"), tossed the coin for the Super Bowl in a live White House hookup to the game in Stanford, Calif.

In 1998, President Bill Clinton managed to host a Super Bowl viewing party at the depths of the Monica Lewinsky scandal. Afterward, a spokesman said Clinton was "amazingly upbeat."

Even President George W. Bush, whose true passion was baseball (he was a former co-owner of the Texas Rangers), made sure to phone the winning Super Bowl coaches during his two terms, even if the game was out West and he had to stay up long past his normal bedtime.

Meantime, at Obama's Super Bowl party on Sunday, the Wisconsin contingent will include Milwaukee Mayor Tom Barrett, who saw the president during his Green Bay-area stop.

Barrett said watching the big game with the number-one Bears fan will be "particularly satisfying". He plans to bring his 18-year-old son and baskets from two well-known Milwaukee companies, Usinger's Sausage and Klement's Sausage.

It's unclear if Obama will see that, too, as rubbing it in.

Associated Press writers Hope Yen in Washington and Carrie Antlfinger in Milwaukee contributed to this report.