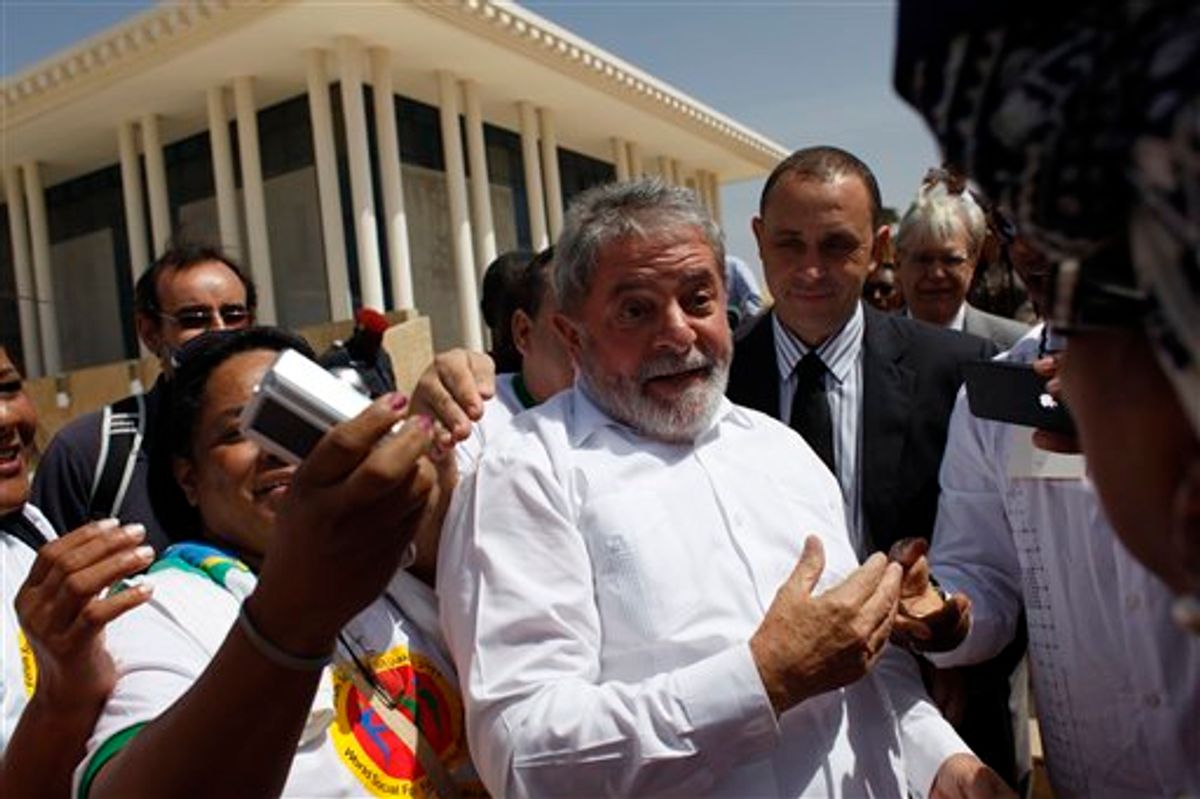 Supporters surround former Brazilian President Luiz Inacio Lula da Silva, center, as he arrives for a World Social Forum event at Place du Souvenir in Dakar, Senegal, Monday, Feb. 7, 2011. The World Social Forum kicked off in this corner of west Africa on Sunday, its mantra of social change "another world is possible" proving especially resonant as anti-government uprisings continue to rock Egypt in the northern part of the continent. (AP Photo/Rebecca Blackwell) (AP)
--

Brazil's first working class president and an icon of the downtrodden said Monday that the global financial crisis proves capitalism is broken.

Luiz Inacio Lula da Silva also said it was time for affluent countries to begin paying attention to nations like Senegal, ranked as one of the world's poorest.

"For too long, rich countries saw us as peripheral, problematic, even dangerous," said Silva, who stepped down last year with one of the highest approval ratings in his country's history, "Today we are an essential, undeniable part of the solution to the biggest crisis of the last decade -- a crisis that was not created by us, but that emerged from the great centers of world capitalism."

His speech marked the second day of the six-day World Social Forum, an annual counterpunch to the World Economic Forum in Davos, Switzerland.

While the latter draws CEOs who sleep in four-star hotels and take turns on the Swiss slopes, the participants in the World Social Forum are happy to camp on the sides of roads or sleep with locals in order to take part in the yearly anti-capitalist gathering.

Instead of suits, they arrive wearing tie-die shirts and trousers of organic cotton, like Lula who addressed the cheering crowd in a short-sleeved shirt. Presentations are frequently ad lib, including a fiery impromptu speech by Bolivian President Evo Morales on Sunday who told the assembled crowd that capitalism was in its death throes.

"We can see it with the global financial crisis. We can see it with climate change and global warming," said Morales, who in 2005 became the first leader to be elected from Bolivia's indigenous majority. "The capitalism of today is a capitalism that no longer produces but just consumes."

The weeklong conference, which has drawn some 30,000 participants from 123 countries, aims to create "open space" for debate on subjects ranging from "the crisis of capitalism" to the African Diaspora. Many participants pointed out that the event is also taking place at a same time of change in Africa.

"If you look across the democratization struggle in Egypt and Tunisia and the challenges in Ivory Coast and Zimbabwe, it is very important for people to express their views and indicate that there is a ruling elite, a very small group of people who are holding us hostage," said Zimbabwean journalist and participant Thomas Deves.

Nilza Iraci, a member of the forum's international organizing committee, says that in the early years, the forum attempted to bridge the gap with Davos. They held a teleconference with members of the Davos conference in an attempt to exchange ideas.

Critics of the forum say it has not effected real change in the 11 years since it started.

Iraci says the event is not meant to effect change, but rather to create a space to network and to share ideas for a new world.

The opening march included a delegation of women from Senegal's provinces who had made their way to Dakar to try to lobby for land rights. In the oceanlike crowd, they ran into Liv Sovik, a communications professor at a school in Rio de Janeiro. She helped the women connect with a leader of the land rights movement that was also at the march, she said.

"It's like a trade fair. You meet to make connections," said Sovik.