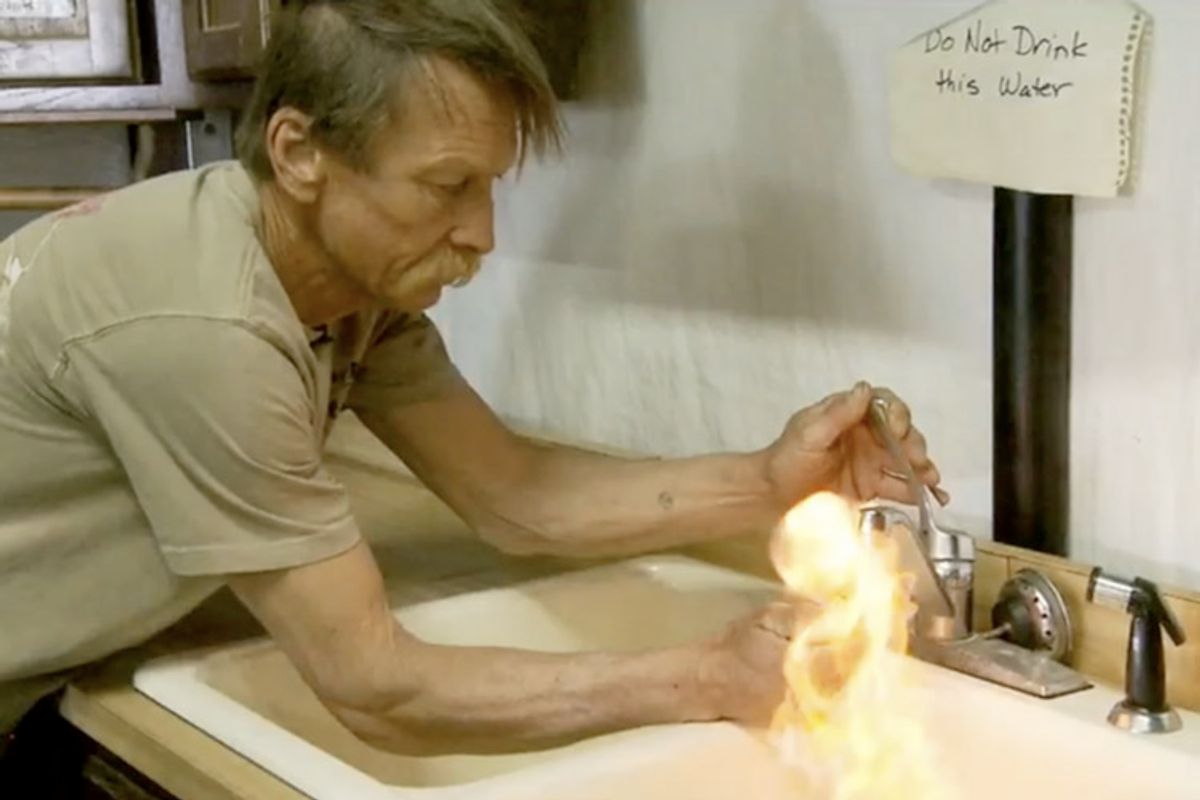 Josh Fox's Oscar-nominated film "Gasland" definitely isn't the first prominent documentary to spark a vigorous counterattack from the corporate interests it seeks to expose. Michael Moore's movies, from "Bowling for Columbine" onward, have provoked extended debates about their accuracy and fairness, and Davis Guggenheim's Oscar-winning climate-change documentary, "An Inconvenient Truth," was widely picked apart for possible exaggerations, generalizations and misstatements of scientific fact. Joe Berlinger's film "Crude," about oil industry practices in Ecuador, became the focus of a lawsuit by Chevron Corp. that threatens to strip issue-oriented documentarians of their First Amendment protection.

"Gasland" is a highly compelling grass-roots-level exposé of the explosion of natural gas drilling across the United States since 2005, when a little-noticed clause in Dick Cheney's energy bill exempted the aggressive and invasive extraction process known as hydraulic fracturing, or "hydrofracking," from any federal regulation or oversight. Fracking, at least in its recent, higher-tech reinvention, involves the explosive injection of millions of gallons of water, laced with tons of toxic chemicals, in an effort to free natural gas trapped deep in the shale. It appears anecdotally connected to hundreds if not thousands of cases of groundwater contamination and a wide range of health problems.

Suddenly on the defensive after half a decade of doing pretty much as it pleased, the gas industry can feel the boom slipping away. New York state recently passed a temporary moratorium on hydrofracking, which is likely to launch a national examination of the practice. So gas advocates are fighting back hard against "Gasland" and the activist movement it represents. In a letter sent to the Academy of Motion Picture Arts and Sciences on Feb. 1, the head of Energy in Depth, a murky P.R. and lobbying organization funded by a variety of oil and gas companies and industry associations, urged the academy to reconsider its nomination of "Gasland":

... "GasLand" puts forth a thesis on natural gas development in the United States founded on a mistaken understanding of the process required to access these resources, and factually incorrect interpretation of the myriad rules and regulations in place designed to safeguard those operations wherever they take place. Along the way, the filmmaker alternates between misstating and outright ignoring basic and verifiable facts related to the impact of these activities on the health and welfare of humans, wildlife and the environment.

... Although we believe the film has value as an expression of stylized fiction, the many errors, inconsistencies and outright falsehoods catalogued in the appendix attached to this letter -- and the many more we withheld for sake of brevity -- cast serious doubt on "GasLand's" worthiness for this most honored award, and directly violate both the letter and spirit of the published criteria that presumably must be met by "GasLand's" competitors in this category.

This oddly formal missive, so full of sweeping charges yet so light on specifics, is signed by Lee O. Fuller, who is described as executive director of Energy in Depth, although his name appears nowhere on the group's website (which includes almost no names and deeply buried contact info pointing at a couple of Washington P.R. flacks). This is presumably the same Lee O. Fuller who served as counsel to the GOP-controlled Senate Environment and Public Works Committee in the mid-'90s and is now listed as vice president of federal resources and political affairs at the Independent Petroleum Association of America.

Attached to Fuller's letter is a lengthy addendum titled "Debunking 'GasLand,'" which you can read on the EID site. It simultaneously accuses Fox of several potentially serious errors and misstatements and also tries, none too subtly, to paint him as a big-city freakazoid elitist, out of touch with the drill-baby-drill American heartland. On the one hand, EID says that Fox falsely claims that gas drilling is not subject to regulation, unfairly asserts that gas companies are hiding the brew of toxic chemicals used in fracking, and overlooks alternative explanations for the intriguing fact that numerous Colorado homeowners who live next door to gas wells can light their tap water on fire. Just as damningly, perhaps, EID describes Fox as "an avant-garde filmmaker and stage director whose previous work has been recognized by the 'Fringe Festival' of New York City." (The scare quotes around the name of a long-standing theater festival, one of many such around the world, are especially nice.)

As Fox told me after returning home to New York from the Oscar nominees' lunch in Los Angeles, "The gas industry has done a pretty good job of making it look like this is some kind of liberal, city-based concern. But that's completely not true, and they're underestimating this movement."

On his own website, Fox has posted a lengthy, point-by-point rebuttal of EID's charges, with links to an impressive array of supporting material. In general, he argues that the allegations against him amount to a bunch of weasel words, semantic distortions and legal dodges, often drawn from government regulators whose independence from the industry they are supposed to police is very much in doubt. "Everything in the film is backed up by data," he says. "I stand behind every second of the movie 100 percent. It was all carefully vetted."

Fox became interested in the hydrofracking issue in the first place because he was raised in Milanville, Pa., in a house he still owns that was built by his "hippie parents." A small town in the northeastern corner of Pennsylvania near the Delaware River, Milanville sits smack in the middle of the Marcellus Shale, an enormous natural gas deposit that extends from New York through Pennsylvania, Ohio and West Virginia. (My own interest stems from a similar cause; my family owns a house in Delaware County, N.Y., less than 50 miles from Milanville.) When a gas company offered him nearly $100,000 for drilling rights on his property, he began to explore the question further, which led him first to Dimock, an isolated town in west-central Pennsylvania that has been extensively contaminated by gas drilling, and then further afield to meet dozens of people affected by gas wells in New Mexico, Colorado, Wyoming, Texas, Arkansas and Louisiana.

During his travels, Fox came up against an uncomfortable demographic fact: Gas exploration has disproportionately affected lower-income rural communities, which tend to be overwhelmingly white, overwhelmingly Republican and distrustful of metropolitan liberals. The gas industry has evidently set out to exploit this fact. "The campaign against 'Gasland' plays to a serious cultural divide," says Fox, "which is something I was actually trying to address in the film. I made the film initially to allow some of the people I interview in the film, like ranchers in Texas or cowboys in Wyoming, to speak directly to the people in the Catskills or in rural Pennsylvania -- these red patches of the Northeast -- who were like, 'Drill baby drill!'"

I don't imagine that the gas industry really believes it can convince the members of the academy -- which has long viewed the documentary category as an opportunity to strike political positions -- to withdraw Fox's Oscar nomination. Even so, you have to wonder if the Energy in Depth strategists have considered that they may be helping "Gasland," both in terms of the Oscar campaign and in terms of putting the movie, and the hydrofracking issue, on society's radar screen.

"You could ask why they're expending all this energy on attacking me, instead of making things better for people who've been affected by gas drilling," Fox says. "I personally think it's because they don't think they can make it better. They think it's collateral damage. We're talking about thousands of contaminations affecting hundreds of families and endangering the water supply for millions of people. But there's a long-standing culture within the oil and gas industry which is bullying, aggressive and willing to lie. They take everything that goes wrong and shove it under the rug. They buy people's silence with nondisclosure agreements, and take away their First Amendment rights for money. You shouldn't be able to do that in America.

"I think what's happening now is that they can't suppress the story and it's driving them crazy. Look, out West in places like Texas and Wyoming and Colorado, oil and gas have been developed for a very long time, and still we see people who are outraged and fighting back about this particular form of insanity. In the East, things are changing very rapidly. I think there's no chance that they will get to drill in New York and Pennsylvania. I think we're going to win."

"Gasland" is now available on DVD, or as a streaming rental from Amazon, Netflix and other vendors.