The president doesn't seem to understand why corporate profits are soaring 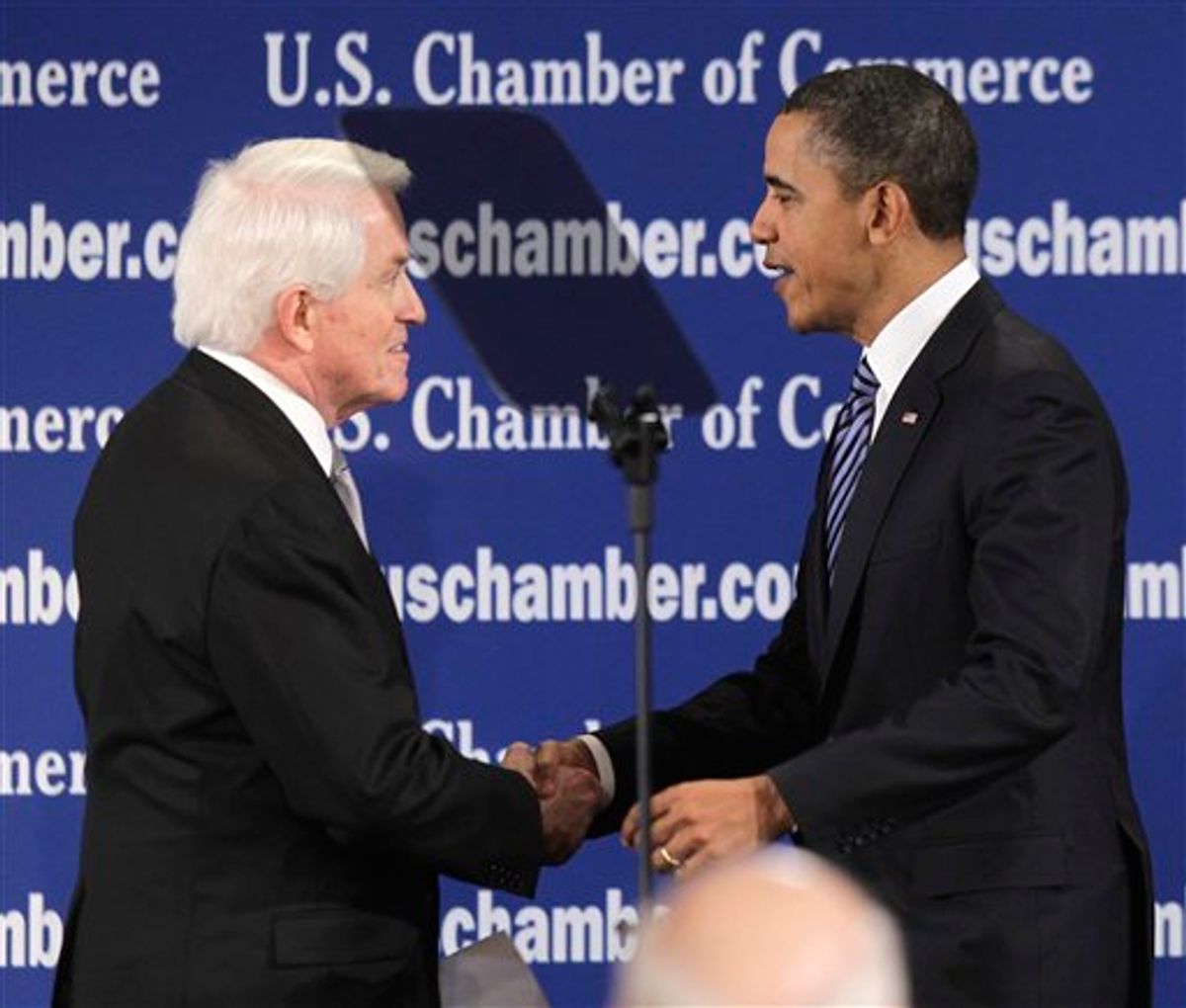 "We can, and we must, work together," President Obama told the U.S. Chamber of Commerce on Monday. "Whatever differences we may have, I know that all of us share a deep, abiding belief in this country, a belief in our people, a belief in the principles that have made America's economy the envy of the world."

Really? I've been watching (and occasionally trying to deal with) the Chamber for years, and all I know is it has a deep, abiding belief in cutting taxes on the wealthy, eroding regulations that constrain Wall Street, cutting back on rules that promote worker health and safety, getting rid of the minimum wage, repealing the new health-care law, fighting unions, cutting back Medicare and Social Security, reducing or eliminating corporate taxes, and, in general, taking the nation back to the days before the New Deal.

So what, exactly, is the deal Obama is pitching to the Chamber?

He said his administration will "help lay the foundation for you to grow and innovate," by eliminating "barriers that make it harder for you to compete - from the tax code to the regulatory system," and by completing more trade deals.

In return, the president said he wants businesses to hire more Americans. "Many of your own economists and salespeople are now forecasting a healthy increase in demand. So I want to encourage you to get in the game," he said. "And as you hire, you know that more Americans working means more sales, greater demand and higher profits for your companies. We can create a virtuous cycle."

Virtuous cycle? American businesses are doing quite nicely as it is. Their profits are soaring. And one reason they're doing so well is they're holding down costs, especially payrolls. So why would they ever agree to add more workers now?

From the standpoint of the nation as a whole more Americans working may mean even higher profits overall. But publicly-traded companies aren't in the business of spending money to help other companies. To the contrary, they're competing with one another to show high quarterly earnings in order to boost their share prices. They'll "get in the game" and begin to hire large numbers of Americans only when it helps their own bottom lines.

And when will that be? Not long ago I debated a conservative economist who argued American workers had priced themselves out of the global labor market and would therefore have to settle for lower real wages and benefits before they'd be hired back in large numbers. By his logic, many health and safety regulations would also have to be compromised or abandoned, since they also make American workers more expensive.

If this is the tacit bargain the president is offering business, it's not a good deal for American workers.

There's no secret to creating lots of jobs by reducing the median wage, slashing benefits, compromising health and safety at the workplace, and, effectively, reducing the standard of living of millions of Americans. We've been doing it for years.

And it doesn't lead to a "virtuous cycle." It leads to the kind of economy we've had for years – including, right now, the most anemic recovery from a deep trough since the mid-1930s. Indeed, when the debt bubble popped in 2008, we discovered how many Americans no longer had the ability to buy enough to keep the economy going. In this and other ways, 2008 bore an uncomfortable resemblance to 1929.

The alternative is to create lots of jobs with high disposable incomes.

In the short term, this means expanding the Earned Income Tax Credit wage subsidy right up through the middle class, and cutting income and payroll taxes for everyone earning less than $80,000 a year – making up the lost revenues by raising the ceiling on Social Security payroll taxes and hiking marginal taxes on the rich.

In the longer term, this means investing in a world-class education for all the nation's kids, including college or high-quality technical education beyond high school. Here again, we'd have to rely on the top 1 percent (who now take home more than 20 percent of all income) to foot the bill.

Might the CEOs and top executives who comprise the U.S. Chamber of Commerce go along with this? After all, they profess to be patriotic. As the president said, they "share a deep, abiding belief in this country, a belief in our people, a belief in the principles that have made America's economy the envy of the world."

I don't mean to sound cynical but I doubt it