The quarterback's alleged relationship with a high school girl is gripping the press. Are we being prudish? 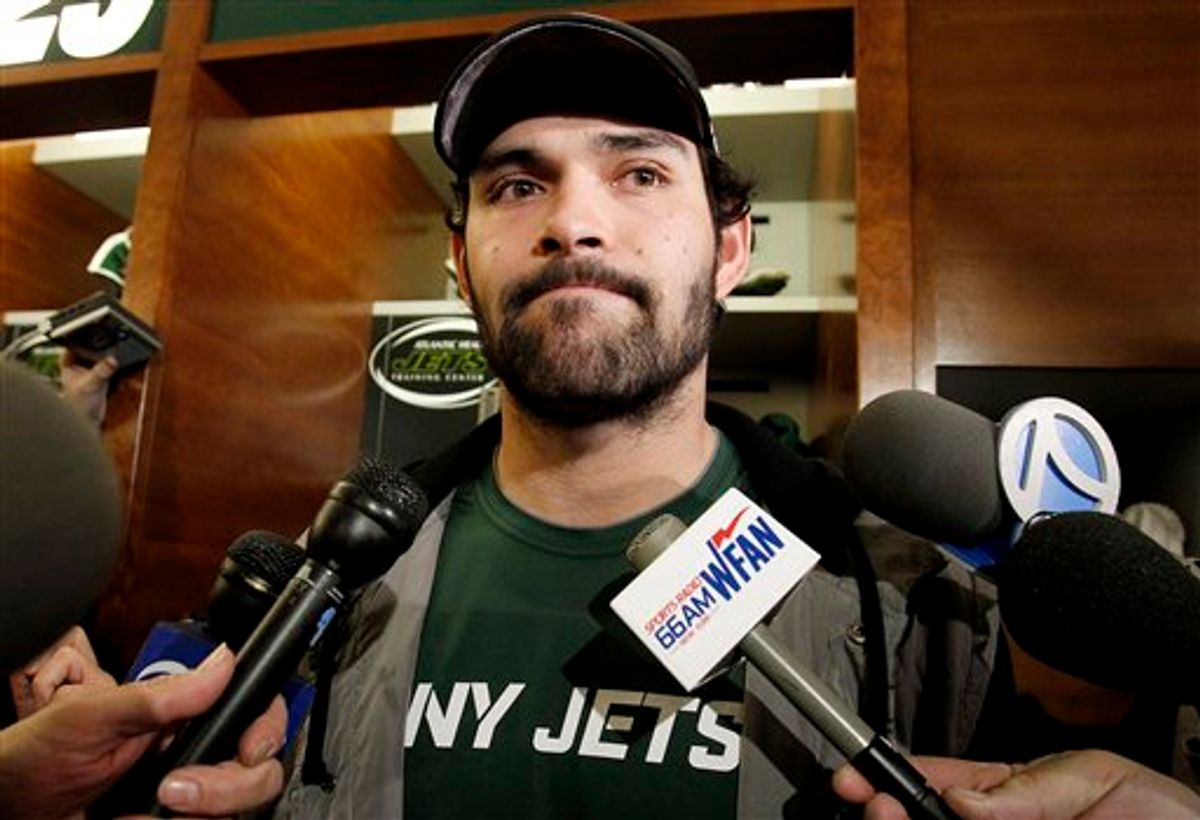 Mark Sanchez is not, contrary to what you have heard, doing anything illegal with that girl. But when Deadspin, the people who gave us Jenn Sterger, Brett Favre and Brett Favre's alleged man jewels, broke the story this week of the romantic escapades of another high-profile member of the New York Jets, the story had all the makings of a tawdry, jailbait-tinged scandal.

Sanchez, the good-looking quarterback with a 2006 arrest for sexual assault on his curriculum vitae, certainly makes a handy target for assumptions of impropriety. So when ever-salacious Deadspin first hinted last week that it had the goods on his liaison with a high school student, it described the story as one that would take us "Back into the grime. Again." The "grime," Deadspin seemed to imply, would be of the famous athlete and the underage girl variety. Certainly it wouldn't have to do with what the lady's lawyer referred to as Deadspin's "repeated and unwanted attempts to communicate" with her and the potential "intentional emotional distress" its reporting on her personal life might bring, right?

Grime fears be damned, you can't keep a story involving the words "football," "sex" and "teenage girl" from an eager populace, and sure enough, by Tuesday, new details had emerged of a chance New Year's Eve meeting at a Manhattan nightclub and a relationship -- in which as Deadspin was quick to butt-coveringly note, "No one committed any crimes" -- with Connecticut high schooler Eliza Kruger. In an e-mail to editor A.J. Daulerio, Kruger claims she told Sanchez when she met him, "You know I'm 17, right?" to which he replied, "Well, we can still talk, but I can't see you until you're 18." Suave. "Actually," she lobbed back, "17 is legal in New York." Which apparently was good enough to put Sanchez in an empire state of mind.

Kruger, for her part, then employed all the wisdom and discretion of a 17-year-old girl when she rather understandably gushed on her Facebook page that "MARK F*CKING SANCHEZ JUST TEXTED ME!!!!!!!!!!" The two soon met up again, and went back to his place in Jersey, where, she pointed out to him, the age of consent is 16.

Perhaps it was her diligent attention to the law that struck his fancy. Whatever the case, enough transpired between the two that she was later able to, after some coaxing from Deadspin, produce photographs of the quarterback's boudoir. (In case you've never had the pleasure, there's a picture of the stadium over his rumpled bed, and a collection of tiny helmets on the desk.) Caught now between a rock and a hard place, she admitted that "I'm still 'close' w mark and he knows about you so jets pr was like here" and suggested, "Publish what you no and ill just be like it was a deceitful friend of mine. You no?"

Well, her plan didn't quite work out that way. Instead, the daughter of a millionaire hedge fund manager in Connecticut (where, FYI, the age of consent is 16) finds herself now, on a homework night, a full-blown Google and Twitter trending topic.

Appalling though it may be for parents – and titillating as it may be for the editors of Barely Legal – the notion of a pretty, blond and wealthy 17-year-old hooking up with an athlete seven years her senior shouldn't be so shocking. But there's something about being on the wrong side of voting age that gives the tale its tabloid allure. Why else would a source tell the New York Post Thursday that Sanchez innocently "thought she was 18"? You'll never read a story in which someone dating a 22-year-old gets a pass because he "thought she was 23."

There is something admittedly ridiculous about the fact that Kruger is four years younger than the age of admission to the club where she met Sanchez, and still too young to legally enjoy relations with him in Arizona, California , Delaware, Florida, Idaho, North Dakota, Oregon, Tennessee, Utah , Virginia, Wisconsin, or Wyoming. It's not as if an individual's level of erotic maturity somehow varies in accordance to one's congressional district. Had Sanchez hooked up with Kruger in Los Angeles instead of the Meadowlands, he could be looking at a world of legal problems right now instead of just the embarrassment of the world knowing he likes young women and miniature football helmets.

The lavish attention the story has generated -- along with the questions of whether Sanchez should be "skewered" for hooking up with a high schooler and if his "judgment" reveals a man whose behavior is "unsettling, quite a bit creepy and just not a good idea" -- suggests that the issue of age of consent is actually important to us. Would the story be more "unsettling" if Sanchez were not 24 but 34? Or if the girl were not 17 but 15? (Answer: yes to both -- the higher and lower you go, agewise, the odder the odds.)

Not all 17-year-olds are the same, and one adroit enough to know her legal sexual status may be dealing from a different deck than the one wearing a purity ring. But we make consent laws because we need guidelines, some benchmark that offers protection to those who require it, and that's mostly a good thing -- even if the "creepiness" of a private story between two consenting individuals rarely hinges on the date on either party's driver's license. Sexual maturity doesn't happen because one reaches a particular birthday. That strange twilight place between the innocence of childhood and the experience of adulthood exists over the span of years, and it's different for everybody. That's what makes it potentially dangerous and easily exploitable. And it's why, as the Sanchez Deadspin story illustrates, it's such an endless source of uneasy fascination.