"Poetry": An unlikely masterpiece from Korea

A heartbreaking fable about a fading grandmother, a dead teenager and a poetry class is 2011's best film so far 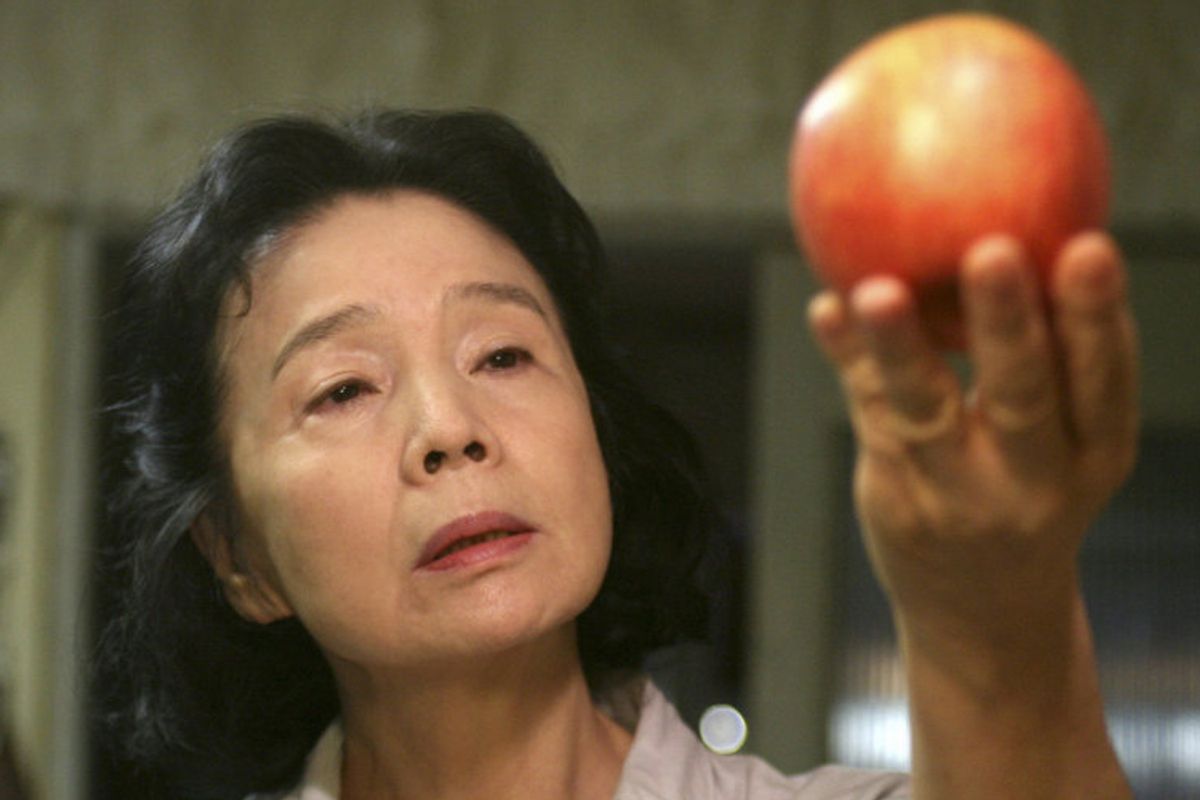 I'm here to tell you that Korean director Lee Chang-dong's film "Poetry" is both beautiful and moving, a quietly haunting meditation on death and life that combines lovely cinematic craft, a memorable central performance and prodigious emotional depth. You'll cry, you'll laugh -- you won't want to leave this story and its unlikely heroine behind. This word gets chucked around too much by critics, including me, but I've seen the film twice and I strongly suspect it's a masterpiece. So why didn't I rank it as my Salon Pick of the Week? (Even though -- in case you're keeping score at home -- it is now No. 1 on my 2011 Movie List.)

Let's review: "Poetry" is almost two-and-a-half hours long. It's in Korean, and it's a fairly slow-moving character drama, not a ghost story or a shoot-'em-up. It's got a director and a star you've most likely never heard of, and its central character is an oddly girlish 66-year-old woman who dresses like a dingbat and is probably suffering from early-stage Alzheimer's or a similar dementia disorder. She lives alone with her teenage grandson and has to cope, after her slightly befuddled fashion, with the fact that he's apparently done something terrible. She takes a poetry class, and the movie features considerable reading and discussion of poetry. It's called "Poetry." It would be difficult to design a movie less likely to appeal to the American public if you tried, and no matter what I say now, you may still come away with the idea that it's some kind of arduous and preachy message picture. The folks at the small and adventurous distributor Kino Lorber are to be commended for getting this into theaters; I guarantee you they're not in this business for the money.

All I can tell you is that if you give "Poetry" 10 minutes of your attention, and then 10 more if you're still on the fence, that you'll be grateful to yourself the rest of your life. Even before we meet dotty, flower-print wearing Mija (she's played, mesmerizingly, by Yun Jung-hee, a semi-retired Korean star who has appeared in more than 300 movies), we know that all is not right in her provincial town. A local girl has been found dead in the river -- in the film's subtle, startling opening scene -- and it turns out that she's a classmate of Mija's grandson Wook (David Lee). I won't mislead you by claiming that "Poetry" is much of a thriller, since Wook's relationship to the girl's death is revealed pretty quickly. Instead, the story is about Mija, and how she confronts both this turning point in her grandson's life and her own illness (not to mention a society that prefers to sweep all such crimes and tragedies under the rug).

Director Lee Chang-dong is a former academic and Korean government minister who's made four films, and even among aficionados of Korean film he's not as famous as, say, Park Chan-wook (of "Oldboy" and "Sympathy for Mr. Vengeance), Bong Joon-ho ("The Host," "Mother") or Im Sang-soo ("The Housemaid"). Both "Poetry" and Lee's last film, "Secret Sunshine," are leisurely female-centric studies of ordinary Korean life, focused on the aftermath of traumatic acts of violence, and on the moral and emotional costs they demand from survivors. With his long takes, his resolute and pure images (the cinematography is by Kim Hyun-seok), his focus on what's in front of him and his intense interest in art and religion, Lee strikes me as a 21st-century East Asian answer to Robert Bresson, the rigorous French master behind "Diary of a Country Priest" and "Au Hasard Balthazar." As this silly, vain and resolute grandmother struggles to do right by her grandson and her conscience and to write the first poem of her life, Lee tells a heartbreaking individual story that also transcends itself and seems to speak for all of us, caught in our beautiful moments between life and death, light and darkness, remembering and forgetting.

"Poetry" is now playing at the Lincoln Plaza Cinema and Quad Cinema in New York, and opens Feb. 25 at the Music Box in Chicago; March 4 in Boston, Denver, Philadelphia and Tallahassee, Fla.; March 8 in Gloucester, Mass.; March 11 in Seattle; March 18 in Detroit and Minneapolis; April 8 in Kansas City, Nashville and St. Louis; and April 15 in Atlanta, with more cities to be announced.