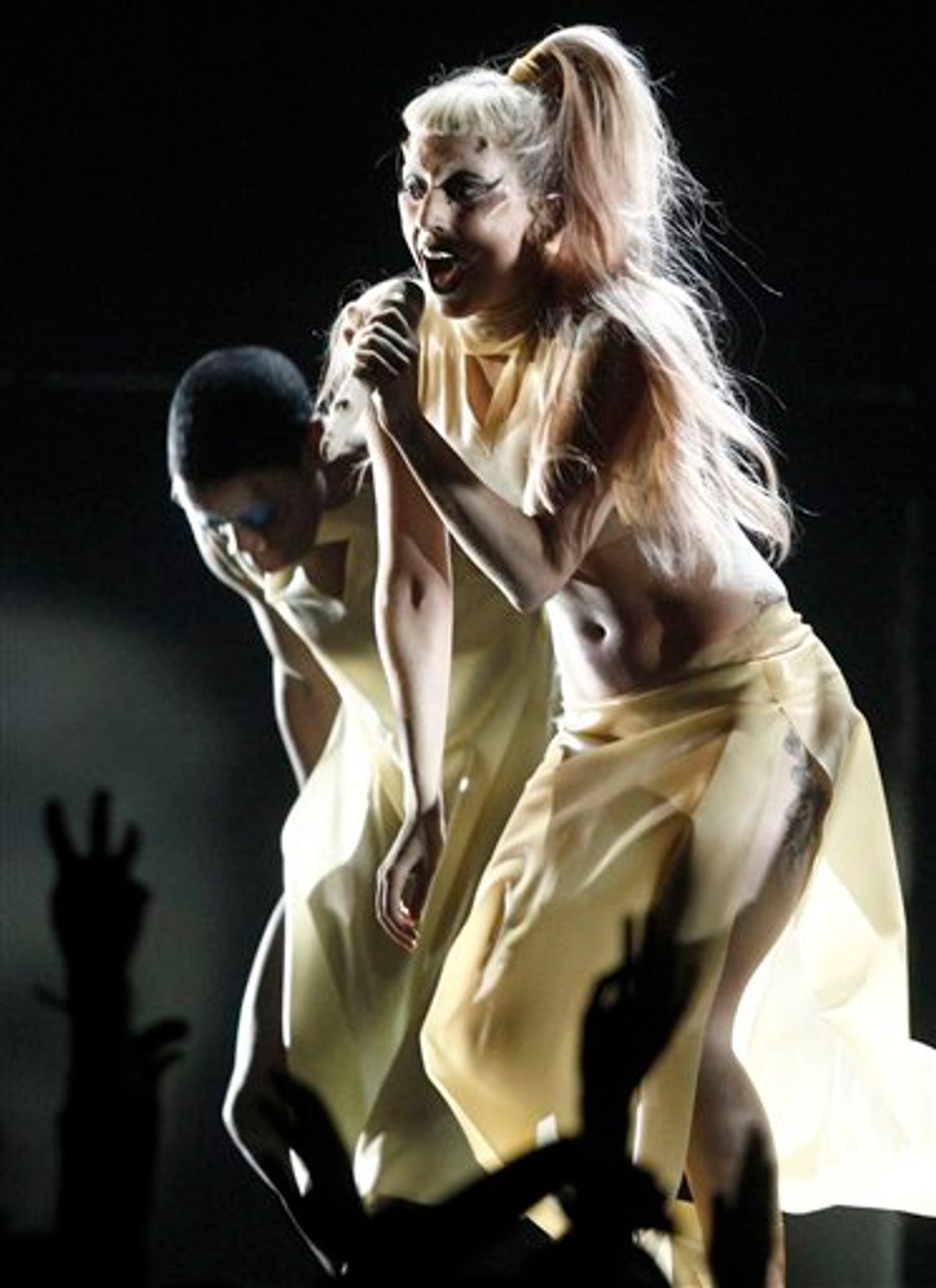 There's something almost touchingly awkward about the Grammys. It's music's biggest night, but its eternally flailing combination of staid industry awards gala and "Whoooooooo, let's put on a show!" always makes for compelling train wreck theater. Is it possible to slap together the VMAs and the CMAs in one night, bringing Barbra Streisand and B.O.B. and Miranda Lambert and God help us, Train, together for something that aspires to be a beautiful mess and not just a conventional mess? Not yet. This year was an intensely restrained affair -- unusual for a show in which every production number seemed to involve tons of smoke and giant, ceiling-licking flames. Yet despite no truly epic moments of rock 'n' roll bad behavior, the evening still had its standout moments of weirdness, awfulness and even, on occasion, true entertainment. Herewith the ones too memorable to channel-surf through.

Paying R-E-S-P-E-C-T to the Queen of Soul, who is recovering from cancer, Christina Aguilera, Jennifer Hudson, Florence Welch, Yolanda Adams and Martina McBride belted out a medley of her biggest hits like it was VH1 Divas night -- and this time it was not a competition. (If it had been, Welch assuredly would not have won.) It was a typically Grammy-like mix of the stodgy and the trying-to-be-relevant, notable mostly because Aguilera redemptively remembered all the words she'd been obliged to sing. And when diamond-encrusted Aretha herself appeared via video to express regret she couldn't attend in person with an uncharacteristically humble, "Next year, OK?" it felt like the show was ghoulishly exploiting the possibility that she might not.

You can just imagine the agony of Grammy organizers figuring out how to introduce Gaga's brand-new, determined-to-be-the-gay-national-anthem single "Born This Way." Damnit, she sang with Elton John last year; what other openly homosexual, flamboyant people in the music business are there? Cue Ricky Martin, speaking of "a song about loving who you love and being who you are." Emerging like a butterfly or member of Spinal Tap from her cocoon, Gaga whipped Madonna's Blonde Ambition-era ponytail back and forth, jutted out her artificially pointy shoulders, and at one point played an organ festooned with heads. It was theatrical, absurd and derivative. It was also a rousing, infectious statement of solidarity and pride.

Mumford and Sons' rollicking, joyous rendition of "The Cave" could make a temporary believer out of even a Bieber fan, and as just half of the one-two punch that included the Avett Brothers' fierce "Head Full of Doubt, Road Full of Promise," it seemed even more luminous. That Dylan then trotted out for a dry, statesman-like rendering of "Maggie's Farm" would have been superfluous were it not for the clearly psyched accompanying growlings from the two obviously thrilled younger bands.

Reprising his oil-and-water VMA duet of "Love the Way You Lie" right down to the folded arms, Eminem seemed ablaze in contrast to Rihanna's yodely cool. But when Dr. Dre showed up to parry with him for "I Need a Doctor," the two old pals bounced ferocious energy off each other in the evening's most riveting moment. No wonder Eminem looked genuinely stunned when he later won for 'The Recovery" -- he was probably still coming down from all the adrenaline he and Dre were radiating.

In a decidedly retro-themed evening, the powerful trinity managed at once to be old school and exuberantly bright young things. Backed by a lush string section, Mars' and B.o.B.'s "Nothin' on You" proved itself even more so to be one of the most sweetly, sincerely romantic ballads to come along in years. (And it will likely long hold the title of greatest love song to include a reference to paying taxes, ever.) Going old school to the point of black and white for Mars' "Grenade" and finally busting full out for Monae's crowd-surfing rendition of "Cold War," it was a soulfully show-stopping extravaganza. Bonus points for B.o.B.'s monocle.

Not that their freaky, destroy the banks or money or whatever that mini riot of a performance of "Uprising" was about didn't have its charms. But the real highlight Muse brought to the evening came soon after, during their acceptance speech for best rock album, when Matt Bellamay gave a shout-out to his "beautiful pregnant girlfriend." Congratulations on fertilizing Kate Hudson, dude. All this and a Grammy too.

Belting out what would for the rest of the evening be referred to by presenters as 'The song otherwise known as 'Forget You,'" Green, dressed as Elton John at the height of his "Muppet Show" giant turkey/knight in shining armor-era, transformed his anthem to bitterness into something "Yo Gabba Gabba"-level warm and cuddly. Adding to the oddness was the slinky, "Glee"-reprising Queen of Goop, who shimmied in the discarded, feathery remnants of Green's costume and solidified her place as the luckiest non-singer to ever sing at the Grammys. Absurd as the whole thing was, damned if Paltrow and Green didn't look as if they were having an absolute hoot. Rock 'n' roll? No. A shamelessly, awesomely wacko version of a gloriously profane ditty? That was clear from the moment the two bleated "Whyyyyyyyyy?" into each other's faces.

Sure, haters gonna hate. But paying tribute to the late "Mr. Solomon Burke" on "Everybody Needs Somebody to Love" and strutting around like a man one-fifth his age, the 67-year-old Jagger was as pouty, as whippet-sleek, as inexhaustible and as shiny as ever. Vocally on his game, Jagger was enough to wake up the show and remind five decades' worth of Stones fans why this man is the dictionary definition of "rock star." And if you doubt that an elder showing that much pure chutzpah is no mean feat, you need only have waited a few moments to endure the legendary Barbra Streisand's brutally flat rendering of "Evergreen" just minutes later.

Honoring new Grammy Hall of Fame inductee Dolly Parton, the trio did a stripped-down version of Parton's achingly lovely "Jolene." When did the white-clad, shaggy-haired Mayer morph into Johnny Depp? It's a mystery for the ages. But the quiet surprise of the trio's performance was a standout in an evening of pyrotechnics and robotic choreography.

In a sweaty, stadium-worthy performance of "'Month of May," Arcade Fire rocked their hearts out while a troupe of bike-riding ersatz-hooligans broadcast the action on their helmet cameras. It was far from their most powerful performance, a showing so earnestly serious it verged on silly. But, moments before they would win for album of the year, the Canadian band's first time out at the Grammys marked a transformation that trumped even Gaga's chrysalis act. By the time they closed out the awards with "Ready to Start," radiant with victory for album of the year, they had officially crossed over from that lush, moody group you play in your bedroom to Springsteen and U2 territory. And as the credits rolled, America was now gazing on the biggest band in the world.