Rise of the celebrity stoner

Lady Gaga, Seth Rogen, Zach Galifianakis: Why are so many stars being honest about lighting up? 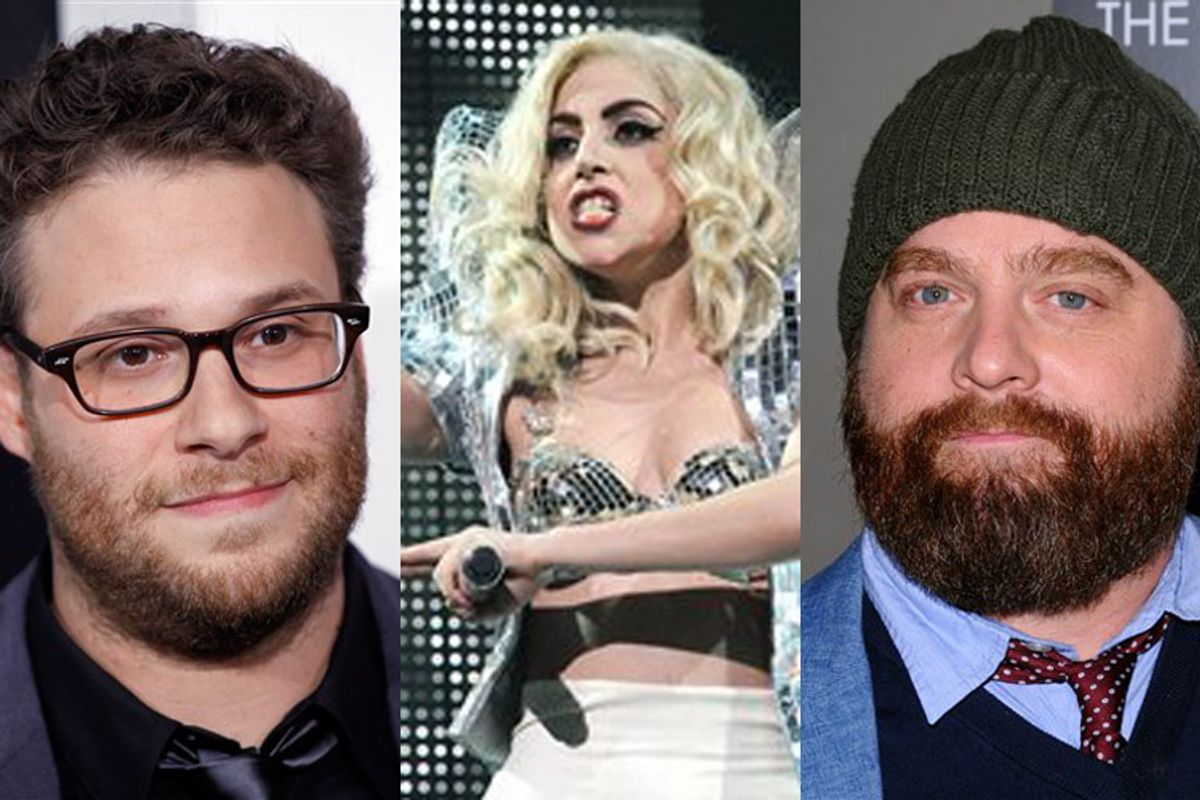 Sit down, America; this may come as a shock. Sometimes Lady Gaga, among other people in the entertainment industry, gets high. I know, you think you know -- you've heard about that Charlie Sheen and that Lindsay Lohan and their arrests and their rehabs and E! True Hollywood Stories. But get this: Sometimes famous people just smoke a little weed and they don't even develop a substance abuse problem or go to jail. Crazier still, this happens all the time to regular folks as well.

Maybe this isn't revelatory to you, Cheech. The history of pop culture is infused with the herbal aroma of the "Harold and Kumar" franchise, certain green-themed Showtime series, and the Black Crowes' set list. Actor Jack Black has admitted to "an occasional celebratory jay," while Sarah Silverman says, "I have contempt for pretty much every drug other than pot." And Woody Harrelson and Snoop Dogg have practically made second careers of their enthusiasm for it, predilections slyly referenced in such mainstream venues as Martha Stewart's show.

Lately, however, it seems we've reached a new level of openness about a recreational -- and, in most places and circumstances, illegal -- indulgence that lots of people enjoy regularly. Last October, Zach Galifianakis sparked controversy when he lit up a suspicious-looking funny cigarette on Bill Maher's show to make a point about California's soon-to-be-doomed, marijuana-tolerant Proposition 19. Then in January, Roseanne Barr declared in her new memoir that "Pot is the only drug that should be legal. In fact, it should be mandatory."

But we must really be in high stoner season now. Just last week Kevin Smith candidly praised his "Zack and Miri Make a Porno" star Seth Rogen to MTV, saying, "I got so much from him. He reenergized me in a weird way. I became a stoner because of Seth Rogen." Smith, whose recent weight loss would seem to disprove the popular notion of plus-size potheads, seemed eager to dispel another common perception about them as well, describing Rogen as a "constantly writing [and] productive ... functioning stoner" full of "brilliant ideas."  He further stated that, "The moment I start smoking, I start working."

As if to lend support to Smith's testimonial on the productivity-boosting power of pot, on "60 Minutes" Sunday night, the overachieving Lady Gaga stated plainly to Anderson Cooper: "I smoke a lot of pot when I write music. I'm not gonna sugarcoat it for '60 Minutes.' I drink a lot of whiskey and I smoke weed when I write." She added, "I don't do it a lot because it's not good for my voice." Her admission was followed by an inevitable slew of online comments regarding the colorful, not-afraid-to-wear-a-steak-or-two entertainer's obviously weed-muddled brain.  "I can tell, Gaga!" wrote a commenter on CNN, while another on PopEater huffed, "Gee who would have guessed that this walking freak show uses drugs?" Dude, if everybody who smoked pot acted like Gaga, a whole lot more people would be making entrances in giant eggs.

Gaga's Sunday evening frankness was at once casual and revelatory, a theme that continued into the night during the Grammys. First, David Letterman cracked about how "Willie Nelson provided the Grammy show snacks," and later, "functioning stoner" Seth Rogen himself joking before presenting an award that "I was backstage getting high with Miley Cyrus." (Cyrus was famously caught on video enjoying some salvia last autumn.)

We turned a corner culturally when, 14 years after Bill Clinton blustered that he tried marijuana in England but "didn't like it" and "didn't inhale," Barack Obama unrepentantly duh-ed, "I inhaled frequently. That was the point." But the willingness of public figures to cop not only to having smoked pot but to still be doing it on a regular basis has in recent months gained a new kind of traction, fueled no doubt in part by challenges to the drug laws, loosening of restrictions on medical marijuana,  and a growing body of research on its medicinal effectiveness.

And there remains something ridiculous about not being able to open a magazine or turn on a television without being bombarded with ads for alcohol and prescription drugs, while the government continues to wage a "drug war" on something you can grow in your yard. And consider the fact that the much-joked-about Willie Nelson, age 77, was arrested last November for possession, and a report issued just last week showed that "more people were arrested last year in New York City on charges of marijuana possession than during the entire 19-year period from 1978 to 1996," a rate of about 140 arrests a day. Thanks, Mayor Bloomberg, a man who's stated of his own pot smoking that "You bet I did, and I enjoyed it." I'd hate my city tax dollars to go toward improving the public school system or anything.

While Gaga or Rogen or Smith may believe their high profiles make them relatively low risk for backlash when they discuss their own pot smoking, their admissions nevertheless come with a raft of still deeply embedded cultural taboos -- and potential legal retribution. Maybe speaking up and even joking about their marijuana use won't effect a sea change in the drug laws. But their candor might at least open the door for others to come out of the closet on the subject too, and eliminate some of the stigma and misconceptions about pot smokers. It's not all "Dark Side of the Moon" and Ben & Jerrys binges, you Internet scolds and DEA officials, you. As with many other things in life, it's silly to have so much secrecy and denial attached to something so many people do. As Gaga explained Sunday night, it's not about getting high; it's just about elevating the conversation. "I don't want to encourage kids to do drugs," she said. "But what artists do wrong is they lie, and I don't lie." And you don't have to be an artist to appreciate someone being refreshingly blunt.