The president proposes a budget with spending cuts ... which have nothing to do with reviving the economy 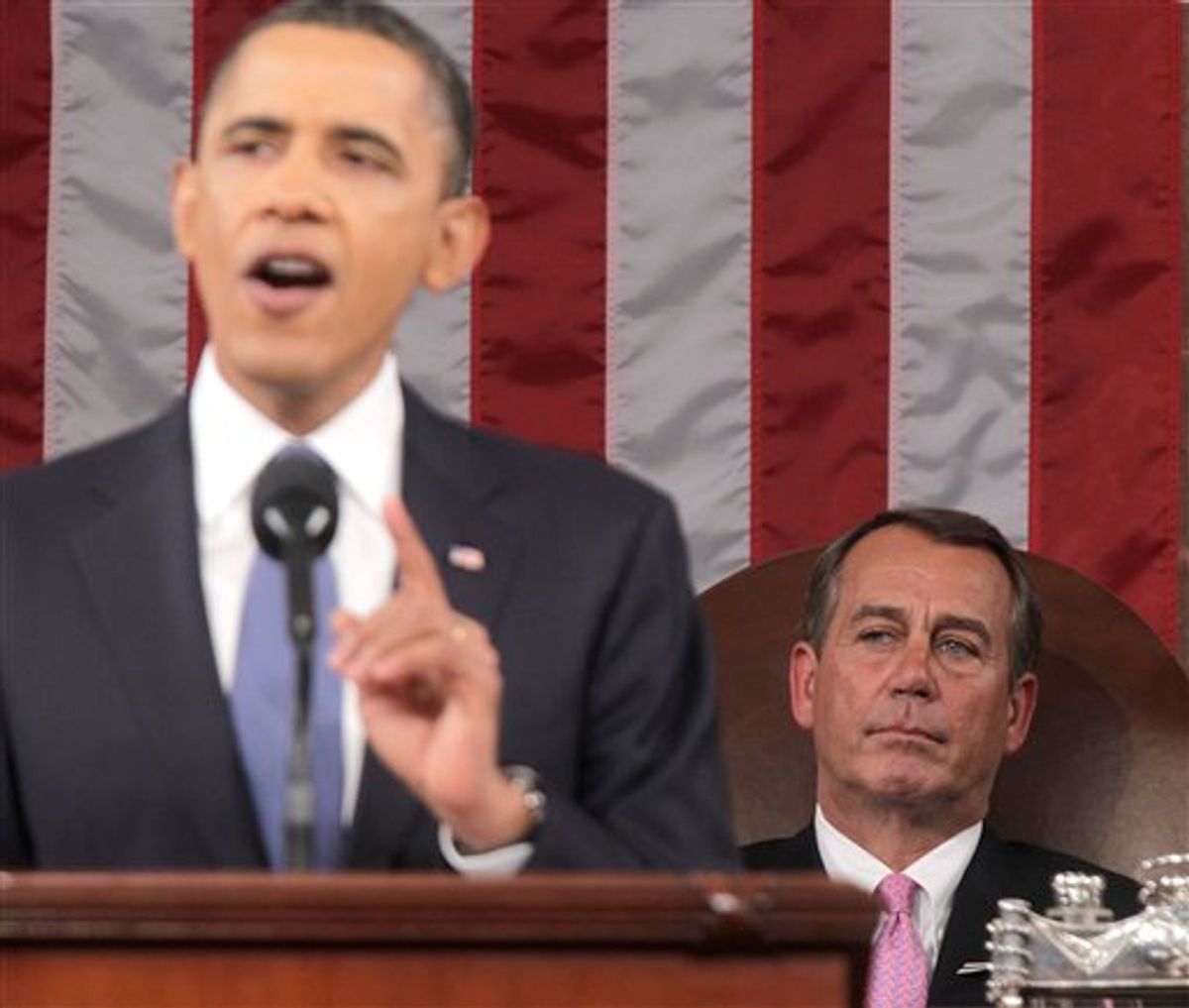 President Obama has chosen to fight fire with gasoline.

Today, Obama pours gas on the Republican flame by proposing a 2012 federal budget that cuts the federal deficit by $1.1 trillion over 10 years. About $400 billion of this will come from a five-year freeze on non-security discretionary spending -- including all sorts of programs for poor and working-class Americans, such as heating assistance to low-income people and community-service block grants. Most of the rest from additional spending cuts, such as grants to states for water treatment plants and other environmental projects and higher interest charges on federal loans to graduate students.

That means the Great Debate starting this week will be set by Republicans: Does Obama cut enough spending? How much more will he have cut in order to appease Republicans? If they don’t get the spending cuts they want, will Tea Party Republicans demand a shut-down?

Framed this way, the debate invites deficit hawks on both sides of the aisle to criticize Democrats and Republicans alike for failing to take on Social Security and Medicare entitlements. Expect Erskine Bowles and Alan Simpson, co-chairs of Obama’s deficit commission, to say the President needs to do more. Expect Alice Rivlin and Paul Ryan, respectively former Clinton hawk and current Republican budget hawk, to tout their plan for chopping Medicare.

To official Washington it seems like 1995 all over again, when Bill Clinton and Newt Gingrich played a game of chicken over cutting the budget deficit, the hawks warned about the perils of giant deficits, and the 1996 general election loomed over all. Washington politicians and the media know this playbook by heart, so it’s natural for them to take on the same roles, make the same arguments, and build up to the same showdown over a government shutdown and a climactic presidential election.

But the 1995 playbook is irrelevant. In 1995 the economy was roaring back to life. The recession of 1991 had been caused (as are most recessions) by the Fed raising interest rates too high to ward off inflation. So reversing course was relatively simple. Alan Greenspan and the Fed cut interest rates.

In 2011 most Americans are still in the throes of the Great Recession, which was caused by the bursting of a giant debt bubble. The Fed can’t reverse course by cutting interest rates; rates have been near zero for two years.

Big American companies are sitting on almost $2 trillion of cash because there aren’t enough customers to buy additional goods and services. The only people with money are the richest 10 percent whose stock portfolios have been roaring back to life, but their spending isn’t enough to spur much additional hiring.

The Republican bromide -- cut federal spending -- is precisely the wrong response to this ongoing crisis, which is more analogous to the Great Depression than to any recent recession. Herbert Hoover responded the same way between 1929 and 1932. Insufficient spending only deepened the Great Depression.

The best way to revive the economy is not to cut the federal deficit right now. It’s to put more money into the pockets of average working families. Not until they start spending again big time will companies begin to hire again big time.

And exempt the first $20,000 of income from payroll taxes.

And raise the ceiling on the portion of income subject to payroll taxes to $500,000.

The lion’s share of America’s income and wealth is at the top. Taxing the very rich won’t hurt the economy. They spend a much smaller portion of their incomes than everyone else.

Sure -- take some steps to cut federal spending over the longer term. Cut the bloated defense budget. Tame the growth in healthcare costs by allowing the federal government to use its bargaining clout -- as the nation’s biggest purchaser of drugs and hospital services under Medicare and Medicaid and the Veterans Administration – to get low prices. While we’re at it, cut agricultural subsidies.

But don’t believe for a moment that federal spending cuts anytime soon will get the economy growing soon. They’ll have the opposite effect because they’ll reduce total demand.

The progressive tax system I’ve outlined will get the economy growing again. This, in turn, will bring down the ratio of the debt as a proportion of the total economy — the only yardstick of fiscal prudence that counts.

But we can’t get to this point – or even to have a debate about it – if Obama allows Republicans to frame the debate as how much federal spending can be cut and how to shrink the deficit.

The President has to reframe the debate around the necessity of average families having enough to spend to get the economy moving again. He needs to remind America this is not 1995 but 2011 — and we’re still in a jobs crisis brought on by the bursting of a giant debt bubble and the implosion of total demand.