"Orgasm Inc.": The flawed quest for a "female Viagra"

A new film asks the question: Why are so many normal women convinced they need a sex booster? 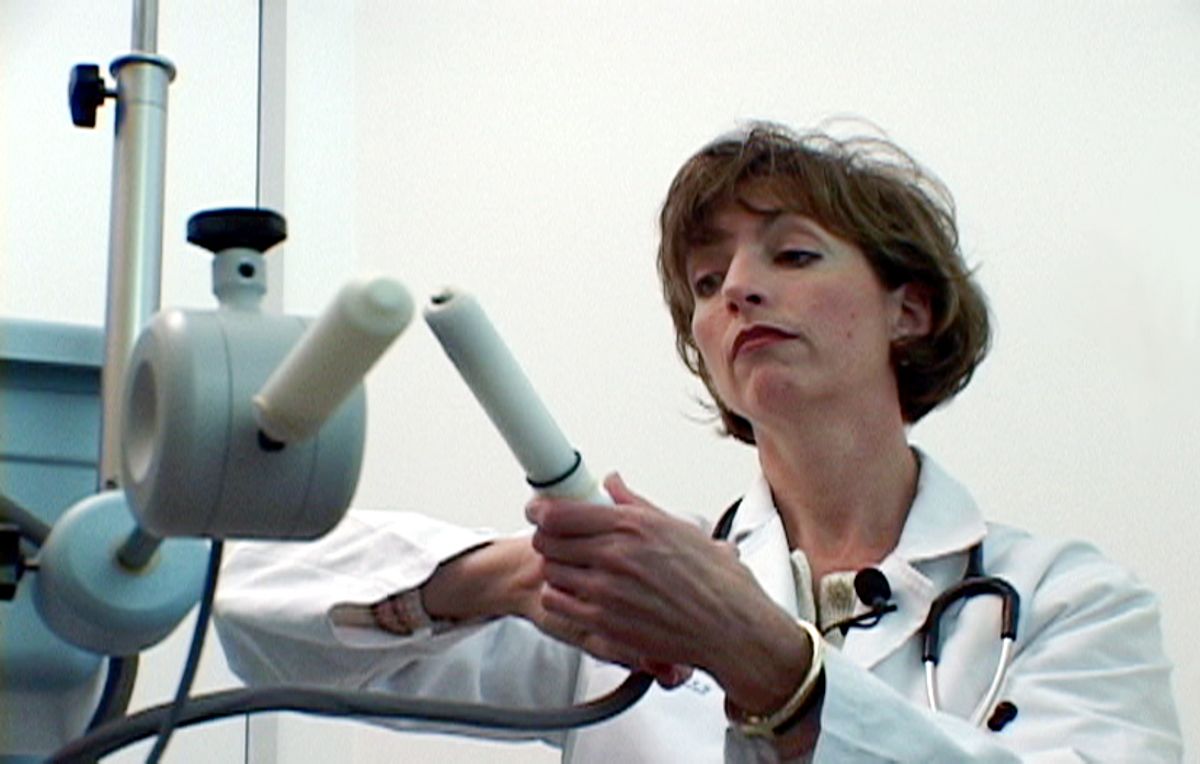 Consider the case of Charletta, a gregarious, 60-ish Southern woman we meet in "Orgasm Inc." who agrees to let a North Carolina surgeon implant an experimental device called -- as God is my witness -- the Orgasmatron into her spinal column. Is Charletta suffering from some unusual or debilitating sexual aberration? Not exactly. Her main problem, in fact, is that she doesn't know that her inability to achieve orgasm through vaginal intercourse alone is not only perfectly normal but an experience she probably shares with a majority of women. She needed a sex-education course and a copy of "Our Bodies, Ourselves," not some gold-digging bozo performing invasive and unnecessary neurosurgery on her. (To add insult to injury, the push-button orgasm device didn't work, and gave her leg tremors.)

Ostensibly, "Orgasm Inc." is a film about the pharmaceutical industry's recent race to cook up a "female Viagra," meaning some kind of pill or cream or patch or whatsit that will deliver better sex for women (whatever that means) and, oh, just incidentally, generate enormous profits and soaring stock prices. But Canner correctly observes that what's really at stake is more complicated. First of all, to sell medicine you need a disease to treat, and "Orgasm Inc." argues that the medical-industrial complex has concocted the catchall diagnosis of "female sexual dysfunction" at least partly for this reason.

It's not that Canner or her interviewees dispute that some women suffer from sexual problems that might benefit from medical intervention, including pain during intercourse or a complete lack of sexual desire. But the definition of FSD -- "persistent, recurrent problems with sexual response or desire," according to the Mayo Clinic -- is so non-specific as to encompass a wide range of personal, psychological and/or physiological issues. And the ubiquitous pop statistic that 43 percent of American women are believed to suffer from FSD derives from dubious, early-'90s sociological data, promulgated in a journal article written by doctors with financial ties to the pharmaceutical industry.

None of which has stopped the development of an enormous FSD industry, epitomized by the sisters Jennifer Berman and Laura Berman, a urologist and sex therapist (respectively) who have become Oprah-tized TV celebrities, best-selling authors and leading entrepreneurs of both brick-and-mortar clinics and Internet advice. I don't think Canner gives the Berman sisters credit for the subtle and complicated character of what they're selling, an ambiguous blend of post-feminist self-empowerment, medical expertise, pharmaceuticals and gizmology. Still, she's right that they're big players in the industrialization of female sexuality, and there is strong circumstantial evidence that they should be understood as paid spokeswomen for Big Pharma.

Essentially, "Orgasm Inc." illustrates a time-honored principle of capitalism, which is that you'll never go broke by convincing women that something is wrong with them and then selling them something to make it better. (Arguably men got the same treatment with Viagra, which clearly addresses the symptoms of erectile dysfunction, but does nothing to address underlying causes like stress, diet, weight, poor health or the aging process.) And although this theme is never visible on the film's surface, Canner also explores the ways that women -- just to go all theoretical on you for a second -- collaborate in their own oppression.

Playing the hero role in "Orgasm Inc." is New York University psychiatry professor Leonore Tiefer, a longtime activist who leads an advocacy movement arguing that the clinical evidence supporting FSD is weak and that women's sexual problems are complex and multifactorial, and generally can't be cured with a pill. But that's a nuanced and negative message, which can't easily compete with the feminine, upbeat, women's-magazine P.R. presentation of the Berman sisters. Canner's biggest gotcha moment in the film is a heartbreaker, when she captures a saleswoman at a medical convention confessing her unease with the "designer vagina" cosmetic surgery technology she's selling to doctors. "Let me find another job before you show your footage," the woman jokes to Canner. But as we learn at the end of the movie, she still works there.

"Orgasm Inc." is now playing at the Quad Cinema in New York and the Gene Siskel Film Center in Chicago. It opens Feb. 18 in Coral Gables, Fla., and Ottawa, Canada; March 25 in Los Angeles and April 17 in Albuquerque, N.M. Check website for more cities and festival screenings.