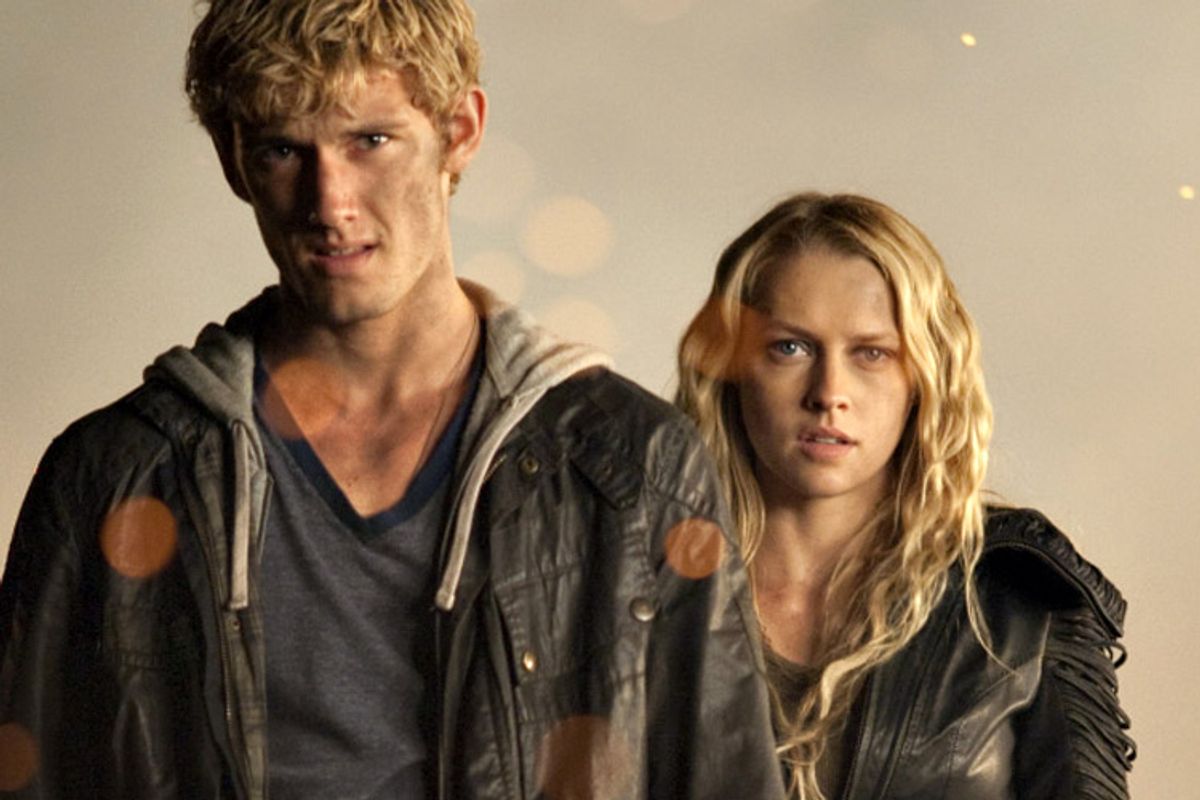 Alex Pettyfer and Teresa Palmer in "I Am Number Four"
--

If you feel like a substandard knockoff "Twilight" movie is far better than no "Twilight" movie at all -- well, first of all, there is no mockery or judgment here. This is a safe space. You can share with us. The disease is much, much bigger than you are. We get it. Yes, I think a Higher Power could help you, but that choice is yours. You understand, or at least your rational mind does, that "I Am Number Four" is an ultra-expedited movie-type product adapted from the first volume of "Lorien Legacies," the utterly cynical young-adult alien franchise created by James Frey, he of the not-entirely-truthful memoir. The distance between this movie and anybody who actually cares -- about it or anything else, frankly -- is measured in light-years and filled with dark matter, like the distance between galaxies.

But if you're simply not going to be able to resist this ludicrous yarn about young extraterrestrial hotties on the run, or the spectacle of model-rific wannabe celebrities simulating an implausible American teen romance, then I am here to tell you that I sat through all of "I Am Number Four" and it was boring and silly but not atrociously bad. No, that's much too glowing; allow me to back up and rephrase. It is atrociously bad, basically. But the thoroughgoing pointlessness of the whole enterprise is somewhat mitigated by the fact that once our human and semi-human heroes finally get to some high-powered shootouts with the trench-coated, black-hatted alien hunters, director D.J. Caruso ("Disturbia") handles them with unexpected brio. That, plus there's a badass Australian chick who shows up late, sort of a young Nicole Kidman type in leather pants. What she has to do with the story I'm not sure, but that's never a bad idea.

When first we meet brawny, lantern-jawed Number Four, aka John Smith (played by Alex Pettyfer, a 20-year-old English cover boy), he is preparing to do some night swimmin' off a Florida beach with a lithe young lady of his acquaintance who isn't particularly wearing clothes. She apparently finds it a vibe-killer when John starts to glow radioactively and emit blue-white LED-style light from his palms, and flees the scene. (No, they aren't doing that at the time. You and your mind!) So that's when John and his oddly young, neatly coiffed pseudo-dad, Henri (Timothy Olyphant), have to pack up the truck and head out for the heartland burg of Paradise, Ohio, where further adventures will of course ensue. (Still looking for your cultural-studies dissertation topic? OK, here: What's up with the weird sexualization of father figures in tween-oriented fantasy?)

While they're on the road, John gives us the blah-blah: He is the fourth in a series of nine Whatever-the-Heckian refugees from the planet Hooble-de-Hoo, who are being hunted down in order by the evil Whumpsamacallums, who sneer and wear black and look vaguely like Lord Voldemort and seem to be having more fun than anybody else in the story. OK, no, those aren't the real names, but they might as effing well be, since Frey and co-author Jobie Hughes (who write under the pseudonym Pittacus Lore) just picked their proper nouns out of the fair-use grab bag. John's home planet is called Lorien, a shameless, oughta-be-illegal J.R.R. Tolkien rip-off, while the wisecracking bad guys are from Mogador, which in our world is actually a city in Morocco. Oh, and John has a shape-shifting lizard-puppy creature called Bernie Kosar, which is sort of funny except that if you get the reference you are, like me, much too old for this entire franchise.

I digress, but that's because there's so little to say. Until the shooting started, I kept slipping off the surface of the movie, like a man clinging to the outside of an inflated balloon. John and Henri hit Paradise vowing to lie low, but John immediately hits it off with Sarah (Dianna Agron), a lovely blond girl who is of course utterly unconvincing as the cheerleader-turned-photographer social outcast she's supposed to be. Agron keeps the top button of her cute little pastel cardigans buttoned, and if that's not symbolic I'm handing in my membership card to the International Semiotics Union right now. (Yes, yes, yes, I know, yes: Pettyfer and Agron are now an off-screen couple as well. But why do I know that?) John becomes enmeshed in an uninteresting romantic triangle with Sarah and Mark (Jake Abel), her arrogant football-star ex, and comes to the aid of science nerd Sam (Callan McAuliffe), who looks suspiciously like a teenage TV star pretending to be a science nerd.

Then again, nobody in this cast shows the slightest ability or inclination to go beyond presentational, faux-sincere, prime-time-soap-style acting, except for Canadian comedian Kevin Durand, who turns a few lines as the malicious leader of a Mogadorian commando team into the movie's most enjoyable moments. Unlike everybody else in the movie, he doesn't have to wander around in the frame waiting for the MOR teen pop on the soundtrack to stop so he can say something meaningful. He just wants to kill some adorable young people, and I can't say I blame him. Caruso and his team of screenwriters (Alfred Gough, Miles Millar and Marti Noxon) never provide enough back story or drama to make us care about Lorien and Mogador or John and Sarah or Number Four and Number Six (that would be the Aussie hellcat). Which leads us to the one and only point of similarity anyone will ever note between this movie and John Milton's "Paradise Lost": In both, you kind of want the bad guy to win.