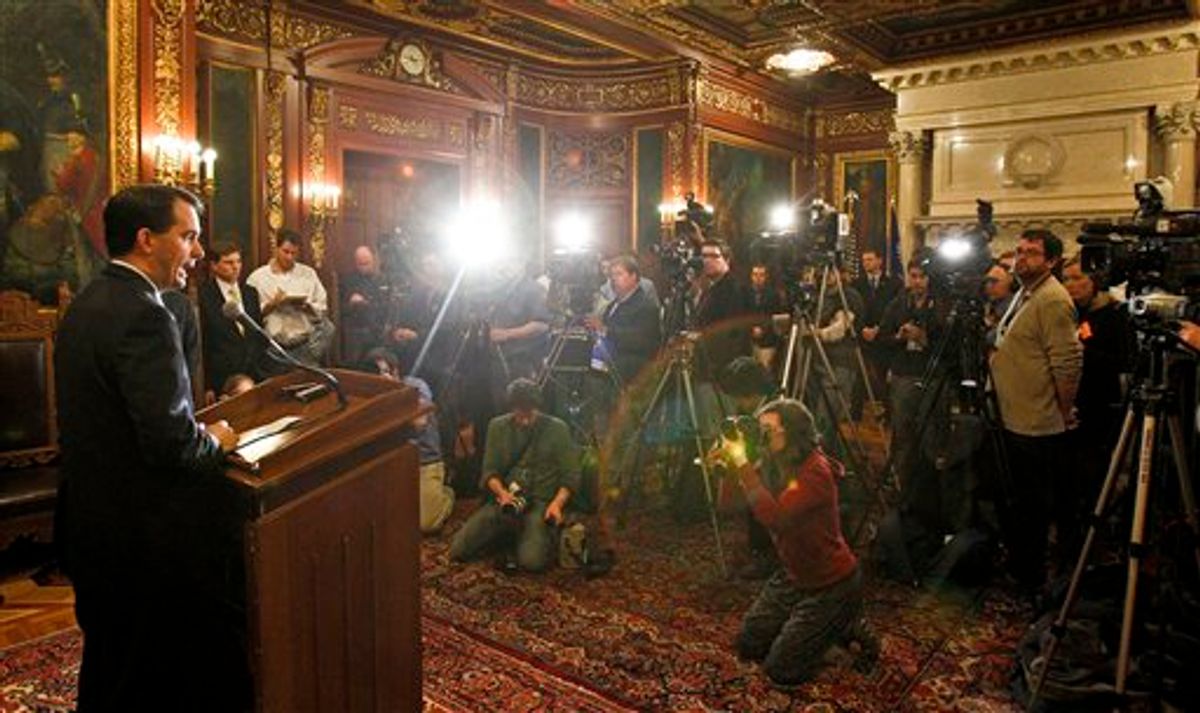 The Republican strategy is to split the vast middle and working class -- pitting unionized workers against non-unionized, public-sector workers against non-public, older workers within sight of Medicare and Social Security against younger workers who don't believe these programs will be there for them, and the poor against the working middle class.

By splitting working America along these lines, Republicans hope to deflect attention from the big story. That's the increasing share of total income and wealth going to the richest 1 percent while the jobs and wages of everyone else languish.

Republicans would rather no one notice their campaign to generate further tax cuts for the rich -- making the Bush tax cuts permanent, further reducing the estate tax, and allowing the wealthy to shift ever more of their income into capital gains taxed at 15 percent.

The strategy has three parts:

The battle over the federal budget.

The first is being played out in the budget battle in Washington. As they raise the alarm over deficit spending and simultaneously squeeze popular middle-class programs, Republicans want the majority of the American public to view it all as a giant zero-sum game among average Americans that some will have to lose.

The President has already fallen into the trap by calling for budget cuts in programs the poor and working class depend on -- assistance with home heating, community services, college loans, and the like.

The assault on public employees

The second part of the Republican strategy is being played out on the state level where public employees are being blamed for state budget crises brought on by plummeting revenues. Republicans view this as an opportunity to gut public employee unions, starting with teachers.

Republicans would rather go after teachers and other public employees than have us look at the pay of Wall Street traders, private-equity managers, and heads of hedge funds -- many of whom wouldn't have their jobs today were it not for the giant taxpayer-supported bailout.

Last year, America's top thirteen hedge-fund managers earned an average of $1 billion each. One of them took home $5 billion. Much of their income is taxed as capital gains -- at 15 percent -- due to a tax loophole that Republican members of Congress have steadfastly guarded.

The Distortion of the Constitution

The third part of the Republican strategy is being played out in the Supreme Court. It has politicized the Court more than at any time in recent memory.

Last year a majority of the justices determined that corporations have a right under the First Amendment to provide unlimited amounts of money to political candidates. Citizens United vs. the Federal Election Commission is among the most patently political and legally grotesque decisions of our highest court -- ranking right up there with Bush vs. Gore and Dred Scott.

Among those who voted in the affirmative were Clarence Thomas and Antonin Scalia. Both have become active strategists in the Republican party.

A month ago, for example, Antonin Scalia met in a closed-door session with Michele Bachmann's Tea Party caucus -- something no justice concerned about maintaining the appearance of impartiality would ever have done.

Both Thomas and Scalia have participated in political retreats organized and hosted by multi-billionaire financier Charles Koch, a major contributor to the Tea Party and other conservative organizations, and a crusader for ending all limits on money in politics. (Not incidentally, Thomas's wife is the founder of Liberty Central, a Tea Party organization that has been receiving unlimited corporate contributions due to the Citizens United decision. On his obligatory financial disclosure filings, Thomas has repeatedly failed to list her sources of income over the last twenty years, nor even to include his own four-day retreats courtesy of Charles Koch.)

Some time this year or next, the Supreme Court will be asked to consider whether the nation's new healthcare law is constitutional. Watch your wallets.

The strategy as a whole

These three aspects of the Republican strategy -- a federal budget battle to shrink government, focused on programs the vast middle class depends on; state efforts to undermine public employees, whom the middle class depends on; and a Supreme Court dedicated to bending the Constitution to enlarge and entrench the political power of the wealthy -- fit perfectly together.

They pit average working Americans against one another, distract attention from the almost unprecedented concentration of wealth and power at the top, and conceal Republican plans to further enlarge and entrench that wealth and power.

What is the Democratic strategy to counter this and reclaim America for the rest of us?