Who are the real masterminds behind a low-tech YouTube hit? 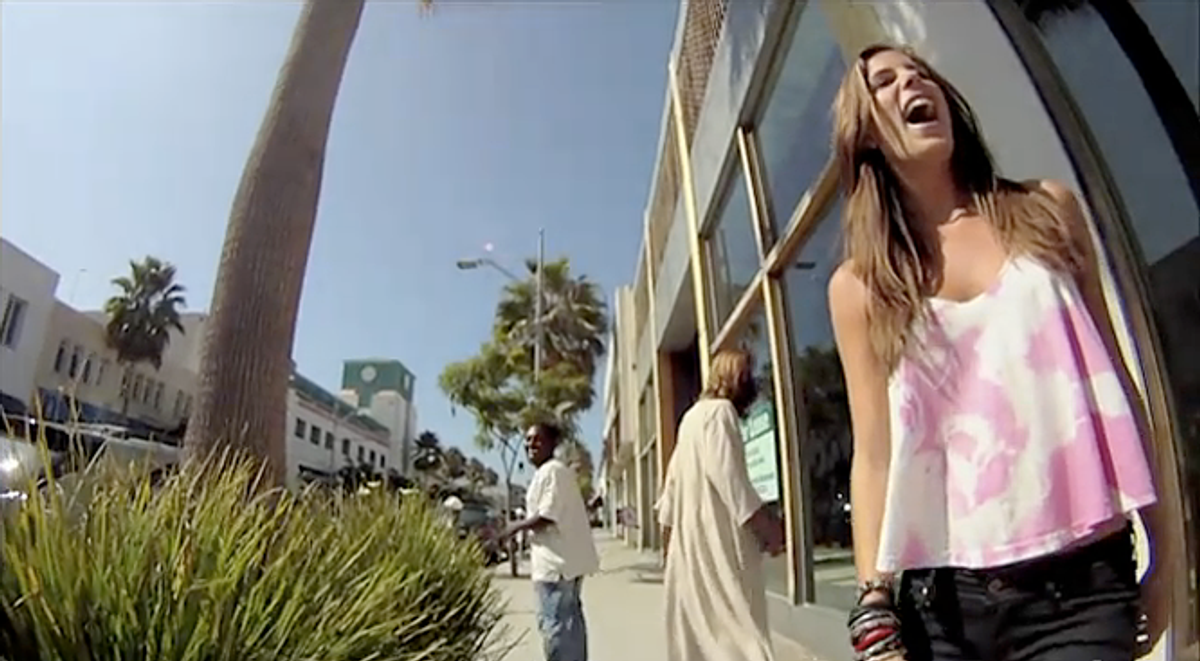 Want to create a viral hit? I suggest the phrase "ass cam." "Ever wonder what goes on behind your back?" self-proclaimed "Rear View Girl" Reanin asks from a casually cluttered bedroom, right before slipping a hidden camera into the back pocket of her accomplice Jessie's form-fitting jeans. "Well, we figured out a way to bust people." In a booty-flaunting clip that's racked up nearly 7 million views since it debuted on YouTube last week, the two then take to the streets of Los Angeles and stealthily record all the second looks their rear views attract. Was their experiment a feminist exploration of the male gaze in modern society, a Hollaback Project-inspired two-girl campaign? Was the jaunty use of Amanda Blank's "Something Bigger, Something Better" (sample lyric: "I'm owning the first class hooker shit") ironic commentary? I mean, look at all those lascivious stares! So busted! Ass cams for the people!

Actually, the clip was created by Levi's. Oh.

You'd sure never know it from the video, which never mentions the brand and barely even shows off said ogle-winning denim. There is, however, a brief partial shot of a Levi's store sign as a man dressed as Jesus openly gawks past the ladies, which I'm sure a shrink would have a field day interpreting. You probably wouldn't even guess it's a Levi's ad from the accompanying "behind-the-scenes" video, which lingers over the girls' butts, closes with an innocuous-seeming shot of a pair of jeans, but never mentions the company. But who needs to say what you're selling when you've got two hotties selling it anyway?

In its first few days, the ass cam video drew plenty of views -- and accompanying media stories about the apparently amateurish stunt. Jess tweeted jovially that the two women simply "love men!" and that "We're celebrating your appreciation 4 women everywhere! ;)" But this week, Colenso BBDO Auckland fessed up that it was the brains behind the behinds. The agency's creative director, Nick Worthington, meanwhile bragged to Campaignbrief.com that "Levi's tells us it's the fastest, most successful viral campaign Levi's has ever done, and it's only just started."

Now that the cat is out of the low-rise, boot cut bag, it's a fair assumption that Levi's has some clever next move to capitalize on all the notice that Jess and Reanin's posteriors have garnered. Nevertheless, the idea of an advertising campaign so subtle that nobody watching can even tell it's an advertising campaign is a pretty unusual one.

It's not the first of its kind, though. Two years ago, a clip of an ecstatic flash mob breaking into "Do Re Mi" in an Antwerp train station became a sensation -- but did anyone notice that it was a promotion for a Belgian reality show?  It did, however, set off an unfortunate epidemic of show-tune singing along commuter routes across the globe. And just this month, a DIY-looking video for a "shaving helmet" went viral before a company called HeadBlade admitted it had hired the Thinkmodo agency to make "an engaging and entertaining video to get people talking about head shaving." Ask yourself, were you talking about head shaving before the shaving helmet? Point to HeadBlade, then. Do you really give a crap about skull razors now? I'm going to award that point to just about everybody else.

Advertisers, in their desperation for our increasingly short attention spans, have in recent years foisted all manner of crazy, "We'd better get on this Internet thing" ideas on an unsuspecting public. Sometimes it's been terrible -- remember when Burger King offered free Whoppers to Facebook users for unfriending their loved ones?  But sometimes the results have been innovative and entertaining. You can't knock a process that would give us Isaiah Mustafa. Even subtler, more online community-inspired campaigns have had their charms -- Volkswagen's "Fun Theory" initiative, replete with piano stairs, may only tangentially have anything to do with selling cars, but it fits the brand's exuberant, outside-the-box image, and never made a pretense of being the product of some random Berlin doofus's penchant for pranks. And that's what makes the difference, that clear sense of including the consumer in the fun. Well, that and not pretending it's about "busting" people for exactly what you hope your product will make them do.

Levi's may yet pull some genius, sales-inspiring sequel out of its shapely butt here, but right now, the ass cam seems a grand example of how garnering millions of page views does not in and of itself constitute an effective advertising campaign. Instead, it just looks like a sneaky trick, one whose message boils down to "If you wear our pants, ugly guys dressed up like Jesus will stare at your caboose." Got it, Levi's. Message received. You're a bunch of asses.