Who needs the Oscars when you've got insane clowns and cats in boxes? Introducing our ceremony of online excellence 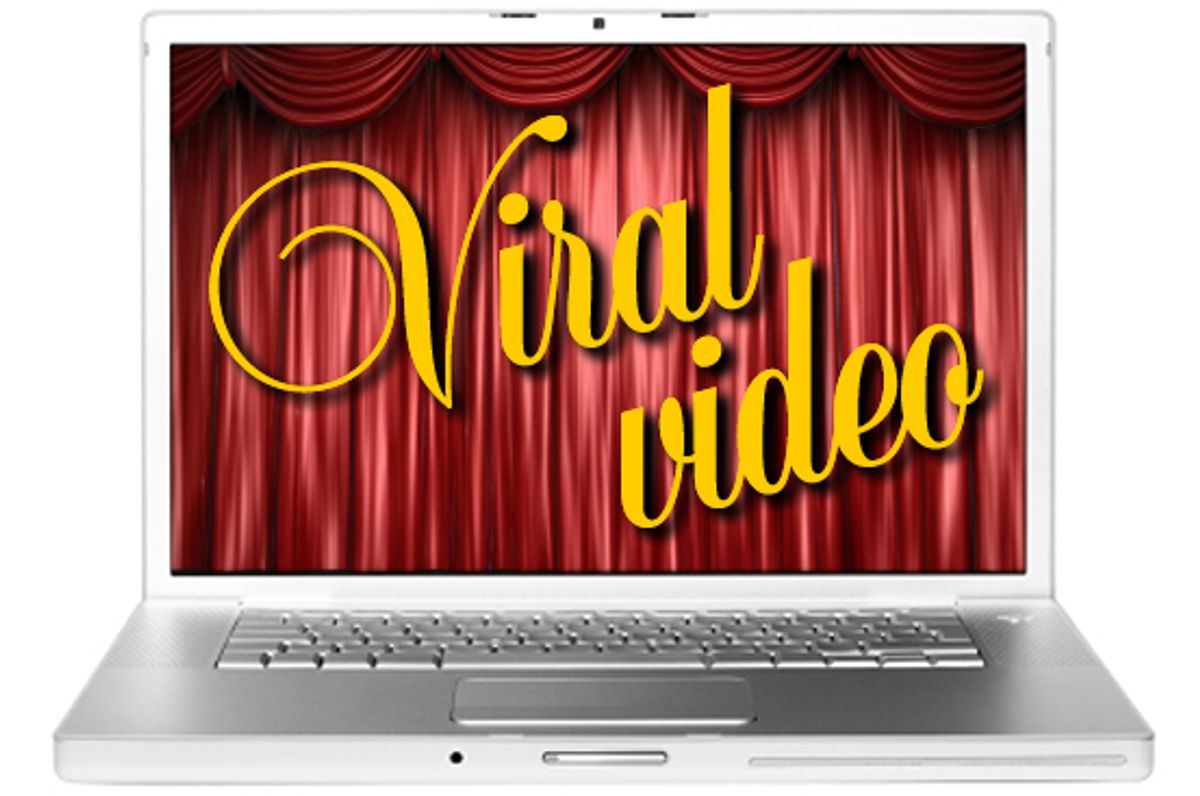 The Academy Awards are Hollywood's way of congratulating itself for the hard work it does the rest of the year, lavishing you with serious films about noble men overcoming obstacles, crazy ballerinas and Mark Zuckerberg. But here at Salon, we wanted to honor the outstanding work of the past year in that other great field of popular entertainment: the viral video. There's no weird campaigning or somber odes to those who've died, just the best viral magic in each winner's respective field. And while we can't give you Anne Hathaway, we can promise no Camille Grammer either. Let the awards begin!

There have been bigger-budgeted productions, fancier campaigns, but could anyone be more psyched out of her mind than the girl giggling her brains out over Photo Booth's twirl effect? At one point, she literally slapped her knee, that's how delighted she was. Note to Michael Bay: Maybe you're trying too hard.

Honorable Mention: Old Spice, "The Man Your Man Could Smell Like"

It's science, intensely-NSFW juggalo style. If you do not yet giggle helplessly at the word "magnets," Insane Clown Posse's wide-eyed awe at the wonders of the universe must have somehow escaped your attention. Aside from the genius of a song that involves rainbows, giraffes and ghosts, it was the killer trademark face paint that really closed the deal. We may not have learned much, but marveled nonetheless that Insane Clown offspring look like their dads -- right down to black and white markings on their little insane clown faces.

An interactive experience that will take your breath away, The Wilderness Downtown was a perfect piece of bittersweet end-of-summer nostalgia. Combining Arcade Fire's spine-tingling "We Used to Wait" with your childhood home address, the video mixed images of a faceless young runner and images pulled from Google maps to create a haunting, breathless experience of youthful longing to get the hell out of this crummy town -- and grown-up longing to return to it.

Best Screenplay: Andrea Dorfman, "How to Be Alone"

A deceptively simple testament to the joy of solitude, Dorfman's liberating, adventurous message that "You're no less intriguing a person when you're eating solo desserts and cleaning the whipped cream from the dish with your finger" was a brilliant celebration of the act of making best friends with oneself. "Because if you're happy in your head," she explained, "then solitude is blessed."

Best Documentary: It Gets Better

A redemptive message of hope to LGBT teens and a potent, often joyful response to an outrageous outbreak of cruelty and bullying, "It Gets Better" went from being a three-worded bit of encouragement from Dan Savage to a moving, international rallying cry last fall. Respect, tolerance and love. It's out there -- and now, millions more people know it.

Finding the poetry in random home videos and the evening news, the Gregory Brothers were the auto-tuned answer to the musical question, wouldn't everything be better with a remix? Without the Gregorys' songifying skills, Antoine Dodson and Double Rainbow still would have happened. But we'd be several earworms poorer.

What could be better than watching those treadmill-dancing video darlings do their synchronized stuff? Watching them do it with a bunch of adorable dogs while raising awareness for the ASPCA.  Guaranteed smiles and a good cause -- and the song's plenty catchy too.

Best Animation: "Marcel the Shell With Shoes On"

As voiced by the terrific Jenny Slate, Marcel was a strange, friendly and plucky little footwear-sporting critter, whose mini-tour of a miniature world was wickedly funny, adorable as hell and even occasionally wistful. If you never thought the sight of a shell dragging a piece of lint could trigger your awwwww reflex, you haven't met Marcel.

How did we ever enjoy the top stories of the day before Taiwan helpfully animated them for us? Like the Southeast Asian version of "Hitler Finds Out," NMA has given us unique interpretations of everything from Lindsay Lohan's jail term to the midterm elections. Funnier than "Meet the Press," more realistic than Glenn Beck, NMA, we thank you for taking the sting out of fiascoes like Scott Walker's governorship.

This year, his giddy musical numbers have become late night's sweetest surprise, letting Gwyneth Paltrow flaunt her Color Me Badd side and giving viewers a memorable, Justin Timberlake-flavored "History of Rap." But it's Fallon's continuing commitment to his Neil Young alter ego that's the show's standout, a witty triumph that reached its apex in a slowed-down November performance of "Whip My Hair" that boasted accompanying vocals by the Boss himself, Bruce Springsteen, who growled memorably, "Whip your hair-errrrr!"

Maru is a Scottish fold cat from Japan. Maru likes jumping. Maru really likes boxes. Really, really likes them, as evidenced in dozens of videos that have amassed over 75 million YouTube views. Other animals may have given broader performances over the last 12 months, but for sheer consistency and charisma, nobody beats Maru. Sorry, freaked out kitten, it just wasn't your year.

Best Male Performance: Steve Moore, "This Drummer Is at the Wrong Gig"

For sheer rocking out endurance, we salute Rick K. & the Allnighters's Steve Moore, for an unbridled, arms a-go-go performance of "Sharp Dressed Man" that would have put a lesser mortal in the hospital. He achieved sudden fame last summer when a 2-year-old clip of an amusement park performance suddenly went viral, and he took to his newfound fame like a professional. "Anybody can go apeshit," he told Philadelphia Weekly, "but making it sound decent at the same time is hard! And that's something I constantly work at."

Honorable Mention: David Grisham, "Dude, You Have No Quran"

Imagine if a low-budget version of Charlotte had been the main protagonist of "Sex and the City" and you've got Katherine Chloe Cahoon. In a series of adorably cheesy clips, an aggressively preppy, relentlessly deer-in-the-headlights Cahoon traipses around assorted parks and beaches, explaining the allure of continental men – and how to win them with hair flips, skirted bathing suits, and zombie-like line readings. Since going viral, Cahoon has insisted the videos were just "meant to be fun…. parodying a travel host" although in interviews the Vanderbilt grad seems remarkably similar to her winningly-stiff travel host persona. Great acting or mere typecasting? Either way, as Cahoon says, we're sold.

It has laughter, spit takes, and lots and lots of tears -- how could anything have compared? James Van Der Beek had already given the world its best-loved gif, the Crying Dawson, a decade ago. But this year, he outdid himself by giving again, this time with even more "intense emotional close-ups of my face." What's your pleasure, people of the Internet: stud wink, O-face, sheer panic, or the classic, dramatic Dawson? Could Colin Firth or James Franco put together have emoted more? Oh, James Van Der Memes, you're this year's "Avatar" -- a perfect encapsulation of our culture, a decade in the making.