Conflict in the oil-rich African nation continues to rattle investors 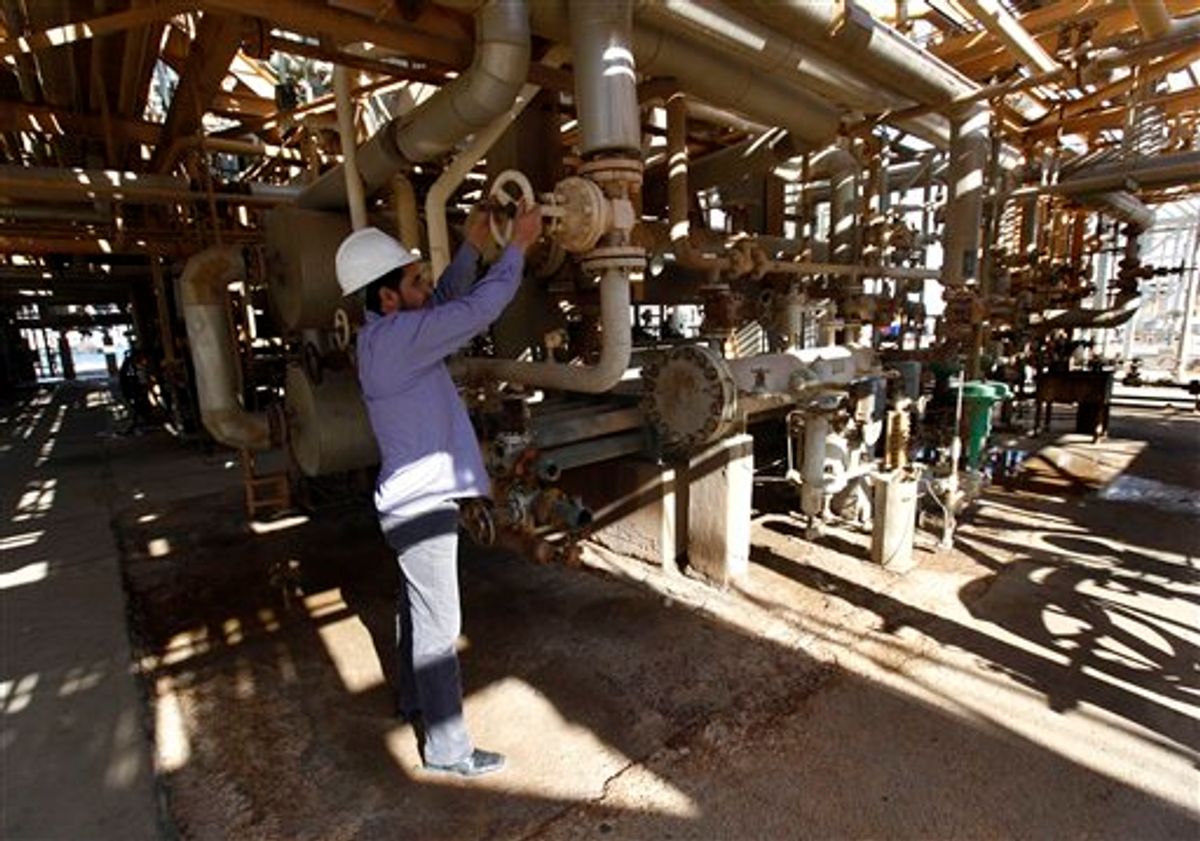 A Libyan oil worker, works at a refinery inside the Brega oil complex, in Brega east of Libya, on Saturday Feb. 26, 2011. Production at Brega has dropped by almost 90 percent amid the country's crisis because many employees have fled and few ships are coming to offload the product. (AP Photo/Hussein Malla) (AP)
--

Concerns over Libya's crisis weighed on stocks, particularly in Europe, on Monday while the euro remained well-supported despite expectations that the new Irish government will look to renegotiate the country's bailout package.

Libya once again was at the forefront of investors' minds as governments around the world piled pressure on longtime leader Moammar Gadhafi to step aside in the wake of the uprising that has split the country in two and left hundreds of people dead.

The primary market impact of the violence in the OPEC country has been on oil prices, which shot higher over the past couple of weeks as investors fretted over Libya's supplies and whether the violence in the Arab world will spread, in particular to Saudi Arabia. Already this year, the leaders of Tunisia and Egypt have quit following huge demonstrations.

The sharp rise in energy prices has had a knock-on effect on shares as concerns grow over the global economic recovery.

At current levels, oil prices have the potential to choke off growth as well as increasing inflationary pressures. If they were to rise to $200 a barrel, which many analysts think is possible in the event of contagion into the Gulf, then the dreaded double-dip recession could well materialize. Rising tensions in Saudi Arabia's oil-rich neighbor Oman are keeping those concerns alive.

"There's little reason to believe traders will deviate the core of their attention in the short term from volatility in oil prices and the evolving geopolitical structure throughout North Africa and the Middle East as the next trading month rolls around," said Terry Pratt, institutional trader at IG Markets.

With Gadhafi still in place despite his diminishing power base, tensions remain high and oil prices were up further Monday. By midmorning London time, the main New York contract was up 77 cents at $98.65 a barrel while the equivalent Brent rate in London rose 63 cents to $112.50.

As a result, share prices in Europe have started the week on the retreat.

The turmoil in the Arab world over the past few weeks has distracted attention somewhat from Europe's government debt crisis, which has already seen Greece and Ireland bailed out by their partners in the European Union and the International Monetary Fund.

However, the Irish government that agreed the bailout lost a general election last Friday and all indications are that the new government, which will most likely be a coalition between the Fine Gael and Labour parties, will want to renegotiate the terms of the package.

For now, currency traders have taken the widely-expected election result in their stride and are more interested in developments in Libya and on Thursday's monthly policy meeting of the European Central Bank. By midmorning London time, the euro was trading 0.7 percent higher at $1.3839.

Though the ECB is expected to keep its main interest rate unchanged at the record low of 1 percent, a number of rate-setters have expressed concern that inflation in the 17 countries that use the euro is rising a bit too much for comfort.

Despite the modest downward revision in January's annual rate to 2.3 percent from the previous 2.4 percent estimate, inflation is still running above the ECB's target of "close to but below" 2 percent.

Further insight will emerge Tuesday when the first inflation estimate for February is published.

Marc Ostwald, a strategist at Monument Securities, said the key will be whether the central bank's president Jean-Claude Trichet ratchets up his rhetoric in the press conference following the meeting.

"The key for Thursday's meeting will be whether Trichet sticks to saying that (inflationary) pressures will be 'closely monitored' or whether the term 'vigilance' is introduced," Ostwald said.

Earlier in Asia, investor sentiment in Asia benefited from an announcement by Tokyo that Japanese industrial production rose for a third straight month in January as overseas demand for Japanese goods continued to accelerate. That was good news for Japan's economy, which is heavily dependent on foreign markets.

However, Seoul's Kospi index dropped 1.2 percent to 1,939.30 following threats by North Korea to retaliate against South Korea for participating in annual military drills with the U.S.