Last night's frightening, incoherent interview showed how far the arrogant "Two and a Half Men" star has fallen 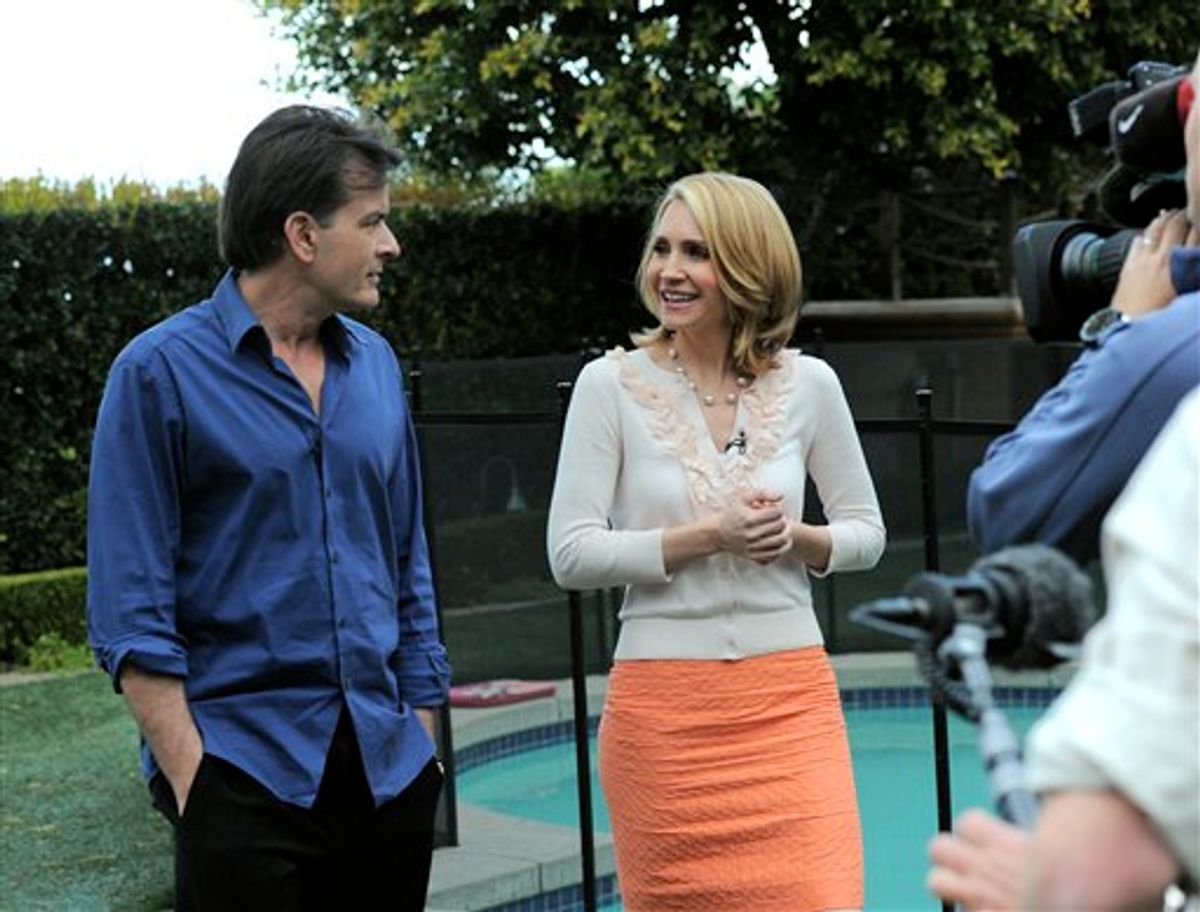 In this photo provided by ABC News, Andrea Canning interviews Charlie Sheen Saturday, Feb. 26, 2011, in Los Angeles for a Special Edition of 20/20 to be aired Tuesday. Sheen told Canning he is 100 percent clean and plans to show up for work despite CBS's pulling the plug on this season's production of "Two and a Half Men." (AP Photo/ABC News) (AP)
--

"What is going on inside the head of Charlie Sheen?" That was the question posed in the opening moments of Tuesday's special edition of "20/20." An hour later, America had the answer it has suspected for quite some time now: ego and delusion.

There wasn't much in the well-hyped ABC special on Sheen to surprise anyone who's been watching clips of the headline-grabbing star's recent torrent of sound bite-rich media appearances. Viewed in one big, black market-grade dose, however, the intimate look inside the head and home of Charlie Sheen made for riveting television. It was deeply depressing and flat-out frightening -- and often, unnervingly, very funny. The guy looks more cadaverous by the minute and his megalomaniacal fury is a slow-motion train wreck, but there's no denying the guy can turn an entertaining phrase. So when Andrea Canning promised Sheen "in his own words," there was no doubt viewers were in for some wildly colorful stuff. And sure enough, he delivered. He may just be an out-of-work sitcom actor, but if you were to read a short story in the New Yorker in which a self-destructive narcissist bragged that his exploits made the Rat Pack and the Rolling Stones look like "droopy-eyed armless children," you'd think, this writer's amazing.

As "20/20" helpfully reminded, Sheen has never had much grace from which to fall. He started smoking pot when he was 11, and at 15, stole from his dad to buy his first hooker. It's been tabloid heaven almost nonstop since. In the past few weeks, he's found a new way to misbehave, with a highly public rampage of chitchat that had him calling in to radio shows, spilling his invective toward his "Two and a Half Men" creator Chuck Lorre to TMZ, and ranting on any show that will have him. It's just a matter of time before he turns up on "Iron Chef."

Tuesday's "20/20" was the pièce de résistance of his current blitz. The star granted the show a full day of access into his home, where he showed off his gym, his walk-in humidor, his two "goddess" girlfriends Natalie Kenly and Rachel Oberlin, and his toddler twin sons Bob and Max. (On Tuesday, Sheen's ex-wife Brook Mueller won a restraining order against Sheen, and that evening, police removed the boys from his home.) While the unorthodox living arrangement may raise some eyebrows -- to which Sheen gruffly shrugged, "Sorry, Middle America" -- it was when he simply sat down to answer basic questions that the true chaos of the scene emerged.

Though Sheen says he's now clean -- and passed a drug test the show administered on the spot -- he still proudly admits that not so long ago he "was banging seven-gram rocks" because, as he explains, he's got "tiger blood." Throughout it all, in fact, his insistence on how awesome and magic and bitchin' he is seemed to be the only thing he was capable of talking about. He answered a question about "that thing in New York" -- when he trashed a room at the Plaza last autumn -- with an "Oh shame, oops, move on" and said he hopes his daughters will "wake up one day and realize how cool dad is; we need his wisdom and his bitchin'-ness." He may be sober, but that doesn't make him sane, a point "20/20" seemed to be making by showing several clips of a considerably calmer, healthier-looking post-rehab Sheen's 1999 interview with Charles Gibson.

In contrast, the Sheen of 2011, who admits his chronic insomnia can keep him up for days and blames his freakout at the Plaza on Ambien, seemed alarmingly hyped and exhausted. And though he cheerfully dispensed all the instantly classic lines we'd already heard in the show's promos, the ones about being on "a drug called Charlie Sheen" and how this "high priest Vatican assassin" "rock star" with "Adonis DNA" and "a highly evolved brain" is not bipolar, he's "bi-winning," there were occasional moments that rang true and sad.

Perhaps the biggest reveal of the evening was how genuinely, pathetically stunned the bitchin' rock star seems that CBS pulled the plug on him last week, shutting down his show with four episodes left to the season. With all the shenanigans they've tolerated over the years, maybe he really did believe they'd let him slide until the end of time or his heart exploded, whichever came first. "I didn't expect such a radical reaction," said the man who recently stayed up for three days straight on an epic bender. But now, "I don't have a job," he said, and, "I've got a family to support." If you're Charlie Sheen, that's a lot of ex-wives, kids, porn stars and marijuana bikini models. As he vowed to get his show back, do a sequel to "Major League" and generally keep on bitchin', he explained that "Work fuels the soul." There is something genuinely tragic about a man who looks so awful and sounds so out of touch acknowledging that he's lost the thing that gave him a reason to hold it together, even if that thing was "Two and a Half Men." On his newly created Twitter bio, he describes himself as an "unemployed winner."

Until now, Sheen's celebrity has ceased to wane. "Two and a Half Men" remains popular; the interest in and even support for good old naughty Charlie has remained strong. But while the world may love a lunatic who can dispense sound bites that make Kanye West's Twitter stream look reasonable, there's only so much goodwill the public will extend for a man whose emotional state of mind would estrange him from their love. It's not his apparent appetite for destruction that may well be Sheen's downfall, it's his contempt for all the little people who don't have his "evolved brain." Of the many women -- including his ex-wife Mueller -- who've accused him of physical abuse, he sniffs, "Look at these sad trolls." Of his higher-ups at "Two and a Half Men" he says, "They're not welcome in my perfect work environment." And of his party companions in general he boasts, "I expose people to magic." Though his arrogance certainly appears to be a sign of serious mental problems, it's his sustained belief that his lame "Middle America" fans will remain perpetually in agreement with him over his rock star awesomeness that's his professional folly.

Why is Sheen melting down so spectacularly now? "I was people pleasing for too long," he explained, proving that despite his vocal loathing of Alcoholics Anonymous, he's still got some of the 12-step speak left in him. He's been getting away with incredibly bad behavior his whole life. But when he mouthed off about his colleagues, he ceased to please them and paid the price. More significantly, he's now mouthing off to his even bigger bosses -- his public. In his agitated condition, he seems to have forgotten that pleasing people is what entertainers do. And in taking that leap off the bridge of reality, the seemingly indestructible bad boy may just have taken the biggest fall of his radical life.