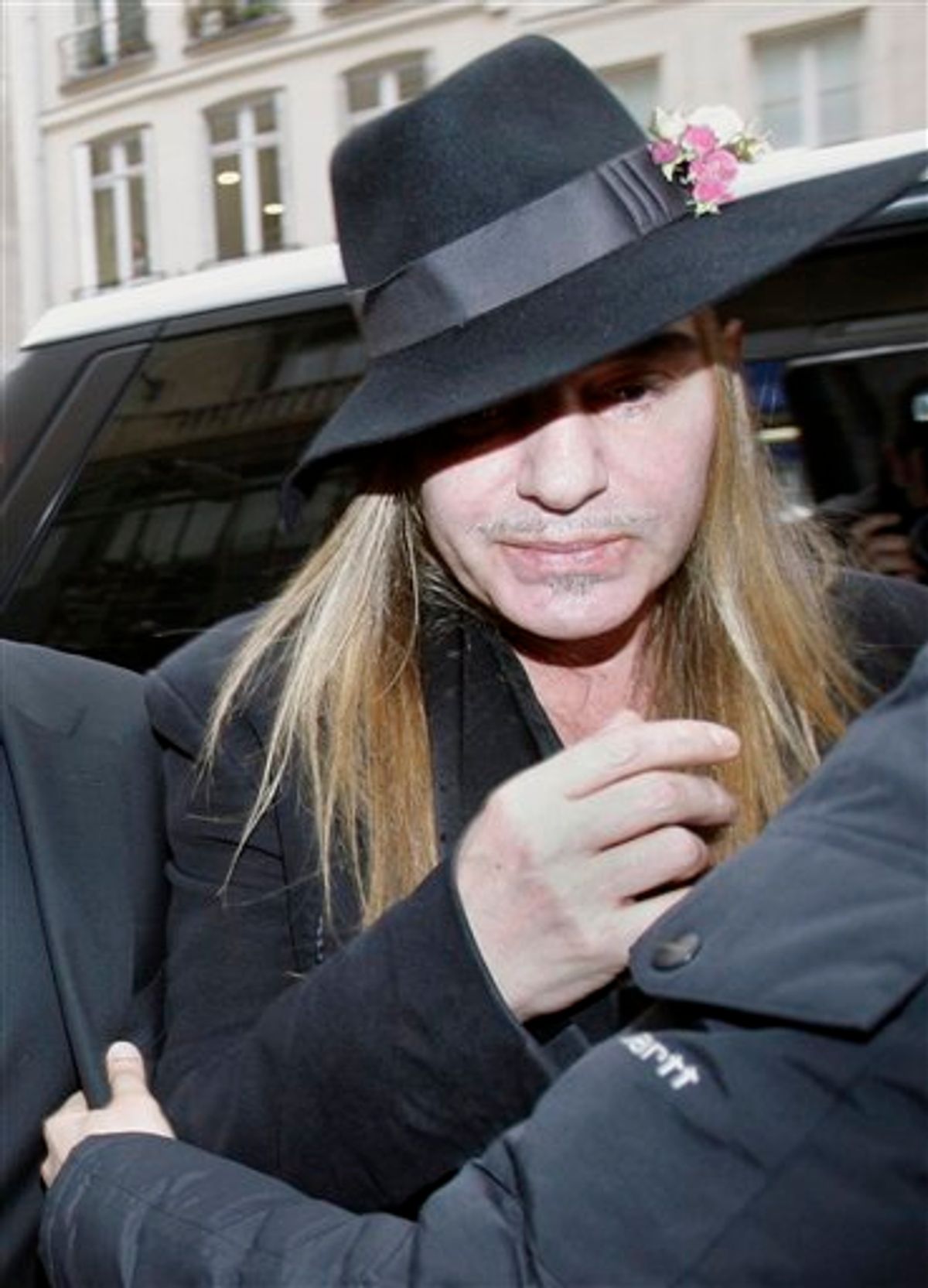 FILE - In this Monday, Feb. 28, 2011 file photo, Fashion designer John Galliano arrives at a police station in Paris. Christian Dior have fired Galliano in wake of alleged anti-Semitic remarks he made during a dispute at a trendy Paris cafe. (AP Photo/Michel Euler, File) (AP)
--

British fashion designer John Galliano has reportedly checked into rehab in the aftermath of a number of widely maligned anti-Semitic comments. He also apologized for the behavior that led to his firing from the Dior fashion house.

He says that he completely denies the claims made against him, and that he has fully cooperated with the police investigation.

But he said Wednesday in a statement released by his lawyers that he accepts "that the accusations made against me have greatly shocked and upset people."

He says he "unreservedly" apologized.

Theories abound, with everyone who's anyone making their predictions after Galliano was sacked Tuesday.

Many fashion critics, editors and stylists put their money on Givenchy designer Riccardo Tisci, whose dark, S&M-steeped creations for Givenchy have won him a rabidly devoted fan base.

Naysayers, though, note that Tisci has done little to boost sales at Givenchy, which is also owned by Dior parent company LVMH Moet Hennessy, and suggest that Dior, as the group's moneymaking locomotive, might be looking for someone with a more proven sales record.

Alber Elbaz would fit that profile.

The Moroccan-born Israeli has transformed Lanvin from a musty old Paris label to one of fashion's hottest properties. Rumors have long swirled that he would be a shoo-in to replace Karl Lagerfeld at Chanel once the 77-year-old uber-designer retires, but Elbaz has always insisted he's happy where he is.

"In a perfect world, it would be Alber" tapped to replace Galliano, said Dana Thomas, a veteran fashion critic and author of "Deluxe: How Luxury Lost its Luster."

"But I suspect he's not interested," she said. "It will be a hard search, a hard shoe to fit."

Other potential candidates include Oliver Theyskens, who's been working for New York-based commercial house Theory after being dismissed from Nina Ricci, and Yves Saint Laurent's Italian-born designer Stefano Pilati.

Galliano's downfall began last Thursday, when he was detained in Paris after a couple accused him of making anti-Semitic insults in a cafe. Investigators are studying witness testimony and Galliano's denials before determining whether to pursue the case.

More problematic for the designer was a video that surfaced Monday in which he praises Hitler in an apparent drunken tirade. Dior announced Tuesday it was firing him.

It's thrown Dior into such flux that it was not immediately clear when it would announce any new appointment.

Dior says it plans to show its fall-winter 2011-2012 collection as scheduled Friday. A Dior official told The Associated Press on Wednesday the house is focusing on preparing for the show and would not comment on discussions of a replacement for Galliano. The official spoke on condition of anonymity because of company policy.

The fate of Galliano's signature line's presentation, slated for Sunday, remained a question mark on Wednesday. Galliano is also owned by LVMH.

Many fashion insiders suspect Dior has already made a decision on a successor.

"These are not the kind of decisions that happen overnight," said Maria Louisa Poumaillou, who owns a cutting-edge Paris boutique. "They've certainly had a contingency plan for a long time. The stakes are simply too high not to."

Angela Charlton in Paris contributed to this report.