How Democrats can become relevant again 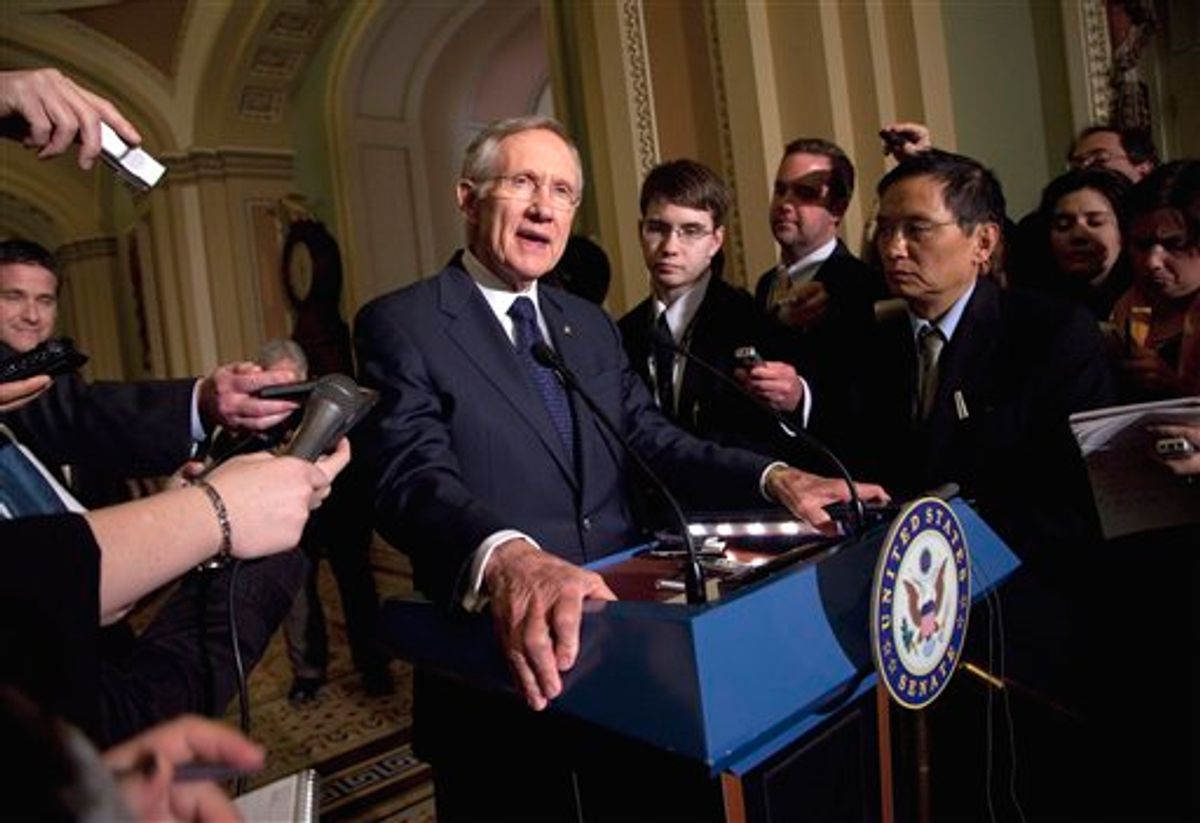 This is what passes for compromise in our nation's capital.

Democrats have become irrelevant. If they want to be relevant again they have to connect the dots: The explosion of income and wealth among America's super-rich, the dramatic drop in their tax rates, the consequential devastating budget squeezes in Washington and in state capitals, and the slashing of public services for the middle class and the poor.

It is not a complicated story. Begin with what's happened to the typical American, whose wages have been stagnant for 30 years. Today's typical 30-year-old male (if he has a job) is earning the same as a 30-year-old male earned three decades ago, adjusted for inflation. (Although women are doing better than they did 30 years ago, their wages still trail men's.)

The bottom 90 percent of Americans now earn, on average, only about $280 more per year than they did 30 years ago. That's less than a 1 percent gain over more than a third of a century. Families are doing somewhat better but that's only because so many families now have to rely on two incomes.

But wait. The American economy is more than twice as large now as it was 30 years ago. So where did the money go? To the top. The richest 1 percent's share of national has doubled -- from around 9 percent in 1977 to over 20 percent now. The richest one-tenth of 1 percent's share has tripled. The 150,000 households that comprise the top one-tenth of 1 percent now earn as much as the bottom 120 million put together.

Given this explosion of income at the top you might think our tax system would demand a larger share from them. But you'd be wrong. You're not taking account of the power of the super rich. As income and wealth have risen to the top, so has political power. As a result, their taxes have plummeted.

From the 1940s until 1980, the tax rate on the highest earners in America was 70 percent or higher. In the 1950s, it was 91 percent. Even if you include deductions and credits, the rich were paying a far higher share of their income than at any time since.

Under Ronald Reagan the top rate dropped to 28 percent. Under Bill Clinton it rose to 39 percent and then under George W. Bush dropped to 36 percent. As you recall, Republicans have managed to keep it there. Their avowed aim is to keep it there permanently.

Meanwhile, estate taxes (which hit only the top 2 percent) have been slashed, as have taxes on capital gains -- which comprise most of the income of the super rich. In the late 1970s, capital gains were taxed at well over 35 percent. Under Bill Clinton, the capital gains rate was 20 percent. Now it's 15 percent.

So who's going to foot the bill for everything we need? Even before the Great Recession, the middle class's share of the nation's total income had shrunk. Yet their tax burden had grown. They were paying a bigger chunk of their incomes in payroll taxes, sales taxes and property taxes than decades before.

Then came the Great Recession -- and with it, lower tax revenues. That means all levels of government are squeezed. Obviously, the middle class can't pay more in taxes. But because the Democrats seem to lack the intestinal fortitude to suggest the obvious -- that taxes need to be raised on the super rich -- we're left with a mess.

Teachers are being fired, Pell grants for the poor are being slashed, energy assistance for the needy is disappearing, other vital public services shriveling. Regulatory agencies don't have the budgets to pay the people they need to enforce the law. Even if it wanted to, the Securities and Exchange Commission couldn't police Wall Street.

All of which is precisely where Republicans want the nation to be. It sets them up perfectly to blame government, blame public employees, blame unionized workers. It lets them pit workers against one another, divide the Democratic base, and promote the false idea that we're in a giant zero-sum game and the nation can't afford to do more.

It diverts attention from what's happened at the top -- so no one sees how well CEOs and Wall Street bankers are doing again, no one views the paybacks and tax giveaways engineered by their Republican patrons, and no one focuses on the tide of money flowing from the likes of billionaires Charles and David Koch into Republican coffers.

Where are the Democrats? Shuffling their feet, looking at the floor. "Please oh please give us four weeks before you shut us down," they ask. "No," say the Republicans, "you'll get only two." "Well, all right then," say the Democrats.

Here's what Democrats should be saying:

Hike taxes on the super-rich. Reform the tax code to create more brackets at the top with higher rates for millionaires and billionaires. Absurdly, the top bracket is now set at $375,000 with a tax rate of 35 percent; the second-highest bracket, at 33 percent, starts at $172,000 for individuals. But the big money is way higher.

The source of income shouldn't matter -- salary, wages, capital gains, other unearned income -- all should be treated the same. There's no reason to reward speculators. (Don't penalize true entrepreneurs, though. If they're owners who have held their assets for at least 20 years, keep their capital gains low.)

And while you're at it, raise the ceiling on income subject to Social Security taxes. And bring back the estate tax.

Do this and we can afford to do what we need to do as a nation. Do this and you prevent Republicans from setting the working middle class against itself. Do this and you restore some balance to a distribution of income and wealth that's now dangerously out of whack.

Do this, Democrats, and you have a chance of being relevant again.