"Rango" and the rise of kidult-oriented animation

Johnny Depp's hyperactive lizard western, like so many Pixar-era animated films, barely pretends to be for kids 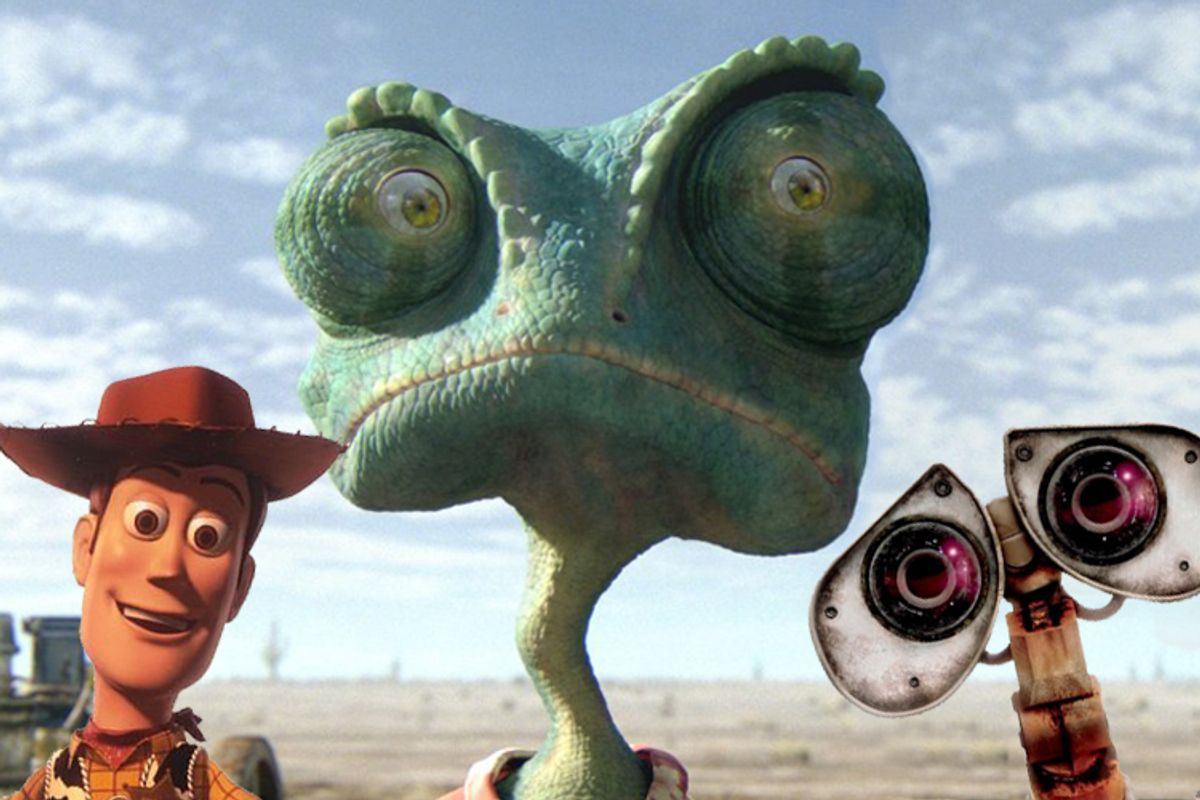 Animated films made for children have long included winks directed at the grown-ups who've been dragged along; it's a tradition almost as old as the medium itself. The classic Disney and Loonie Tunes shorts are loaded with adult-oriented humor and pop-culture references, whether it's Bugs Bunny vamping like Mae West, Donald Duck visiting a Freudian psychoanalyst or the femme-fatale sexuality of Betty Boop. But most of the time those gags were a minor side dish, designed to provide parents a few knowing chuckles in between the outbursts of chaotic silliness and slapstick violence.

In recent decades, as the kidult, media-saturated generations raised since the '70s have grown in consumption power and produced their own offspring, the polarity of animated films has gradually but decisively shifted. This week's premiere of "Rango," a grotesque and sometimes thrilling mishmash that announces the arrival of "Pirates of the Caribbean" director Gore Verbinski and George Lucas' Industrial Light & Magic studio into the animation wars, offers an intriguing case in point. With Johnny Depp voicing the title character, a lost pet chameleon who must save a parched Old West-style town from the depredations of water barons and developers, "Rango" is a chaotic assault of in-jokes and movie quotes, pilfering its plot from "Chinatown" and individual scenes from "Rio Bravo" and "Shane" and "High Noon," and adding a surprising (for the genre) amount of violence and grisly humor. (My 6-year-old son pronounced it "great," although roughly three-quarters of it was over his head.)

Verbinski and ILM are seeking a spot in the animation marketplace partway between the upscale, critic-friendly Pixar films and the purposefully idiotic, more kid-oriented DreamWorks franchises like "Shrek" and "Kung Fu Panda." As I see it, Pixar has understood for years that its principal demographic is adult viewers, and not necessarily just parents. The studio itself has grown up alongside two or three generations of viewers who have no animus against animation, and who are happy to engage with "cartoons" both as a nostalgic exercise and a valid storytelling medium. Of course, certain parental assurances come with the Pixar brand, and that's important: There won't be much violence or cursing, the main character will prevail over all obstacles and learn valuable life lessons, and there'll be just enough comic business to keep younger viewers giggling instead of wriggling.

But "Toy Story 3" did not become the top-grossing animated feature in history because kids loved it beyond all measure. It's a tremendously rich entertainment -- part pseudo-Proustian meditation on childhood's end, part pop satire, part prison-break adventure -- that's about 85 percent pitched at viewers in their 30s and 40s. My son liked it just fine (although his twin sister fled the theater in terror), but has never talked about it since or asked to see it again. As he correctly observed afterward, its story has a great deal in common with "The Brave Little Toaster," and most of the ways in which it's a better movie are incomprehensible to him. (Indeed, the striking similarities might provoke a lawsuit -- if both movies weren't Disney properties.)

As for the middle-aged melancholy of "Up" and the apocalyptic satire of "Wall-E" (both slightly overpraised, in my book) -- well, I'm sure you can find kids who enjoyed them, but they definitely aren't children's movies in any conventional sense. Indeed, the expectations for animated film have shifted so much that critics often beat up on movies that cut down on the grown-up cultural references and appeal most strongly to kids. Pixar's "Cars" is widely regarded by critics as the studio's weakest film, for instance -- and it's the only Pixar film my kids (and my friends' kids) want to watch over and over again. (They also like "Monsters Inc." and "Finding Nemo" pretty well, which likewise aren't that well regarded.)

DreamWorks has made plenty of money off the "Shrek" and "Kung Fu Panda" franchises, but the studio has never quite shaken off the sense that they're the second-rate, cynical hucksters of the animation world. (Perhaps because the shoe fits a little too well.) It would certainly appear that there's an unfilled market niche for old-fashioned animated adventures aimed at actual children, in the classic Disney mode of "101 Dalmatians" or "Pinocchio," that aren't laced with ripped-off dialogue from "Star Wars" or principally meant to move Burger King products. ("Despicable Me" was one surprising recent example.) The current Disney studio's non-Pixar movies, like "The Princess and the Frog" or the forthcoming "Winnie the Pooh" reboot, have sporadically tried to fill that role. But all producers of animated films are facing the same inexorable fact: Grown-ups pay the tickets and the DVDs, and they don't want to be bored stiff or drowned in saccharine.

You won't have that problem with "Rango," anyway. I'm honestly not sure whether or not it's a good movie, but it doesn't leave you much time to ponder that question. If you follow the film world, you can't help but have mixed emotions about Gore Verbinski, a genuine mad genius who can spin crap into gold (and sometimes works in the other direction too). With the "Pirates of the Caribbean" franchise, Verbinski has turned a threadbare concept based on a Disneyland ride into an enormous money machine that veers from brilliant self-parody into utter and shameless stupidity and then back again. His horror movie "The Ring" was, at least arguably, scarier and more effective than the Japanese original. "Rango" is pretty much what you might expect from a Verbinski approach to the western: It's hyperactive, often hilarious and ultimately exhausting. Oh, and the characters are all animals -- a chameleon, yes, but also mice, tortoises, prairie dogs, Gila monsters and pillbugs. It's the first pillbug western.

Depp's motormouth chameleon is closer to Blanche DuBois than a traditional western hero; he's a couch-potato, legend-in-his-own-mind drama queen who finds himself embroiled in several different overlapping stories when he hits the town of Dirt. One of them is the old legend about the new sheriff who's gonna set things to rights, one of them is the metaphysical quest for the Spirit of the West (who himself turns out to be, of course, a movie character) and one of them is "Chinatown," with Ned Beatty doing his best John Huston impersonation as Dirt's nefarious desert-tortoise mayor, who may have diverted the town's water into the desert for his own purposes. (The highly enjoyable voice cast also features Isla Fisher as a love-interest female lizard, Abigail Breslin as a mouse and Alfred Molina as an armadillo mystic, along with a pseudo-Greek chorus of mariachi-musician owls.)

ILM's animators have produced a dazzlingly detailed cast of stop-motion-style characters; although the universe of "Rango" is entirely a digital creation, it's dense and dirty and looks three-dimensional. To their credit, I guess, Verbinski and screenwriter John Logan ("Gladiator," "Sweeney Todd") have given themselves permission to break most of the recent rules about animated movies. Along with the maddening litany of quotations from other movies, "Rango" features extensive and sometimes mordant scenes of gunplay and violence, along with a small furry animal uttering the line, "I once found a human spinal column in my feces." (I think that line sailed right over my son's head, but he found the shootouts, along with the slithery rattlesnake villain, a little disconcerting.) You can bring the kids or not; that part's up to you. But the quippy, ADHD, semi-self-mocking metaverse of "Rango" isn't really meant for them.